Frostbite 15K: Sticking it out

I'm still thawing out from this morning's Frostbite 15K in Richmond, Va. This was a tough one.

I had never run a 15K race before, and I ran this one due to the lack of local races in the late January/early February timeframe. I wanted a tune-up race before my half marathon, at the end of February and this was the only race I could find within driving distance. It's been going on for 30 years and has a good reputation, so I figured I'd check it out.

Before the Race
I am pretty sure I set a sleep PR. I usually sleep pretty poorly the night before a race due to the excitement and anticipation. But last night I had a deep peaceful, sleep, only waking up once at 3:45 and falling back to sleep shortly after. I view this as huge progress because sleeping well pre-race has been a struggle for me in the past.

I woke up at 5:40 and got ready. It takes just under two hours to drive to Richmond, so my plan was to leave the house at 6:15. The forecast was 40 degrees and rain. To me, that sounded like shorts and long sleeves. However, I packed some alternatives just in case it felt warmer or cooler.

Greg decided not to run this race, so he drove me down there and was my cheering squad. I ate my banana and bagel in the car and kept checking the forecast on my cell phone hoping the rain would end earlier.

We arrived to the race at around 8:15. Plenty of time to go to the bathroom, get my bib and warmup. During the warmup, I realized that shorts were not enough, so I sacrificed 10 minutes of my warmup to change into compression capri pants. I had a running rain jacket with me, but at 40 degrees, I didn't think I would need it over my long-sleeved shirt.

Thankfully, the race "headquarters" was inside of an elementary school. The volunteers were really nice and I noticed that this race had more of a community feel than the ones I run in the DC area. Everyone's spirits were high, despite the crappy weather.

Strategy and goals
I have to admit I was very close to bailing on this race completely. I heard that there was a section of the race course that was flooded that even cars couldn't pass. I also heard that the course was open to traffic and we needed to watch out for cars. I was dreading a repeat of the Love Rox half marathon (also in Richmond) from 2013. I thought it might be better to just drive back home, wait for the rain to stop and the temperatures to rise and do a long run. I seriously almost just bailed, 5 minutes before the race start.

But then I decided to start the race, and if it turned out to be miserable, I would just stop at the 2-mile mark (which was close to the start line).

Once I realized that the course would be slippery and there could be some obstacles, I decided my main goal was just to stick it out and maintain a strong effort.

Miles 1-3
I started out, and my spirits were so-so. I had only warmed up for 5 minutes, which wasn't ideal, and there were huge puddles everywhere. I was cold right from the start. But, fitness-wise, I was running
pretty fast and my 7:25 pace felt more like a 7:40 pace, which was awesome. These miles were pretty uneventful, but I decided I would stick with it and run the best race I could, given the conditions. The rain was coming down very steadily, and I was completely soaked after just one mile.

I was told that the course had only one major hill, and it was somewhere in mile 2 or 3. But to me, the entire race seemed very hilly and there wasn't one hill that stood out as being "the hill".

Another challenge that I quickly realized was how curvy the course was. I had been warned about this, and had planned on running the tangents, but with so many puddles and with the road being slanted and uneven, I spent my energy watching my footing instead of running tangents. For most areas, there was only one area of the road that wasn't slanted or uneven, and given a lingering glute/hamstring issue, I didn't want to aggravate that.

Miles 4-6
This is where things got dicy and I had to put on the brakes. Usually I run downhills pretty quickly, but I was afraid to go all out on this course due to how slippery it was. There wasn't ice, but the road wasn't always asphalt, there were potholes, and it just felt slick. My top priority was to finish the race safely and if that meant spending more energy on watching my footing and being careful, then that's what I would do.

I made a conscious decision here to back off the pace for the sake of feeling in control of my footing on the downhills and areas of the roads that were slick. I reached the flooded area during mile 5 and we were diverted onto the grass/mud. I am such a wimp with that stuff. I hate running in cold, wet mud. Ew! I slowed to my "easy" pace during this short portion because it was slippery and muddy and difficult to run on. But after that, my spirits lifted and I got back into race mode.

Miles 7-9.5
At some point during mile 7 the rain really picked up, and so did the wind. It was a complete downpour and I was freezing. I had memories of the New Jersey marathon from 2009 when I was 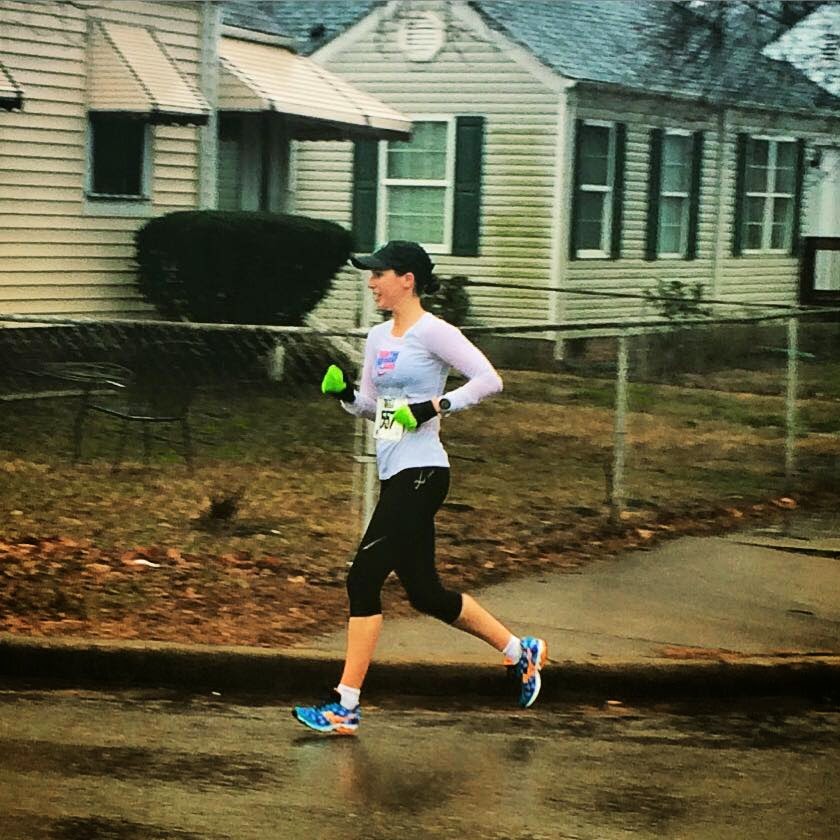 taken to the medical tent afterwards for hypothermia.

My motivation was to finish quickly, without hypothermia and to warm up as soon as possible. Usually during a race I want the race to be over because I'm pushing so hard and I just don't want to be exerting that kind of effort. Here, my effort level was admittedly not race effort, and all I wanted to do was get out of the rain. Part of me was worried that if I went all out, I'd get sick and put too much a strain on my body in that kind of weather. And part of me was still holding back due to the slippery roads and uneven pavement.

But my mental state was relatively good. During Love Rox, I was angry and unhappy. During this race, I was "neutral" about the weather and focused on just getting to the finish line and putting out a hard effort.

During the last mile, the cold wet rain was really starting to weigh on me. At that point, I just didn't care about my pace anymore and I wanted so badly to get out of that weather.

After the Race
I was so happy to be done with that race! I went inside the school and found out my time and placing, but there was no way I was sticking around for my award. I needed to get out of those soaking clothes ASAP. Thankfully, one of my good friends lives less than a mile away from this school and I was able to shower at her place.

My time was 1:12:10. My "official" race pace is probably a lot slower than my Garmin pace, due to the course being 9.5 miles. It wasn't a long course, but there was no way to run the tangents and it was extremely curvy. And I don't think it's USATF certified, but I could be wrong.

My Garmin pace for the race was 7:37, which I think is pretty good given how hilly and slippery this course was. And although I definitely was working hard, it wasn't race effort. I was able to have a semi-conversation with this one guy at around mile 6-7, and normally that wouldn't be possible. So, fitness-wise I think I am in solid shape.

Although this race was intended to be a tune-up and "check-in" on my fitness level, it ended up being more about taking "what the day gives you" and toughing it out. I put out a solid effort, kept a positive attitude, didn't bail on the race, and placed 2nd in my age group. I didn't focus on the fact that the weather sucked. I focused on making sure my footing was good, that I was running on the most non-slanted area of the road, and that I pushed through to the finish.

And the good news is that I don't think I will be very beat up from this and I will be able to resume training.

And now I am drinking hot chocolate by the fireplace as I write this!