I set a new PR for myself in terms of number of races completed in a 13-hour period. Two 5Ks! Why this madness? See explanation below.

My Sister's First Race
After never having run more than a mile in her life, my sister enrolled in a boot camp last fall with her friends. Naturally slender, her nickname in high school was "bones" and she never had to worry about her weight. She's one of those women that you envy because they can eat and drink whatever they want, pop out three children and still look amazing! She decided to join boot camp to improve her overall fitness and she's been religious about going to the weekly sessions. My sister and I have practically nothing in common, so I was thrilled to see her taking a liking to running.

Her boot camp instructor got her up to running 7 miles nonstop, and convinced her to run this 10K race with others in her group. So several months ago, she told me that she was going to be running her first race ever-- the Brambleton Ribbon Run 10K. She asked if Greg and I wanted to join, so we registered for the corresponding 5K.

Crystal Run 5K Friday
Fast forward a few months and I realize that it's also Crystal Run 5K Friday season, and yesterday was the only Friday where it really fit in with my training/racing schedule. (Although arguably it didn't fit in because I was already registered for a 5K today, but let's forget about that for a moment). I love the 5K Friday races, and I have done at least one per year since they started in 2009. It's great because you can run a 5K on Friday and be recovered in time for a Sunday long run.

I ended up picking the perfect Friday. Quite a few of my teammates were also running, and my coach came out to cheer us on. There was very little wind, which is rare for this race. There are a lot of tall buildings, so I often find myself fighting the wind during this race. It was sunny and 65, which is too hot for my liking, but about half the course was shaded by the buildings, and my coach told me that I could definitely race a strong 5K in that weather. I needed to get it out of my head that I couldn't do it.

My only time goal was to break 22:00. My PR is 21:29 from last fall, so I felt like it shouldn't be too difficult to do. I certainly was not trying for PR because I didn't want to go all out and my PR was set in 40-degree weather. I warmed up with one of my teammates and felt extremely relaxed beforehand. The focus was on being there with my teammates and running strong. 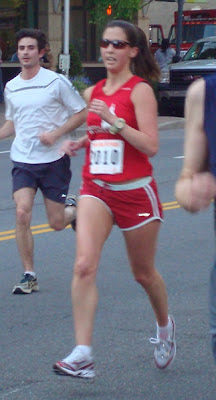 The race started and it was crowded. These races have gotten extremely popular over the past three years and even though I started near the front, it was difficult to run at the pace I wanted. I was with two of my teammates for the first half mile, and then I decided to pull ahead. At mile marker 1, I realized one of the teammates (Jessica) was still with me and knowing that she is about my pace, decided to try and stick with her. I normally like to run my own race, but I have lately discovered the power that comes from running with others. I knew that Jessica was strong and fast, so I decided to feed off of her energy and make sure I kept up with her. It's hard to say who was doing the pacing, but we ran lock step for pretty much the rest of the race.

Mile 2: 7:02
We were able to go faster now that it wasn't so crowded. I felt myself push harder and it was good. I felt like the first mile was too easy and the whole time I kept thinking: "this is tempo effort, this is nowhere near 5K pace". So being able to finally push felt good.

Mile 3: 7:01
Still with Jessica, we pushed through and maintained a steady pace. We were passing a lot of people and believe it or not, we still had to weave! With about 1/3 mile left to go, I turned on the gas and went for it. I felt Jessica fall behind but just focused on running hard to the finish. I ran past my coach and other spectating teammates and got an extra boost. They were yelling at me to break 22:00. I hadn't been thinking about my time at all during the race, just the effort level. But if I had thought about it, I would have realized how dangerously close I was to 22.

Last 0.13: 6:26 pace
The only thing I don't like about this race is that the finish line is up a hill and around a curve and the surface is a bit uneven. I like to see the finish line way out in front of me and let it pull me in. But I gunned it in, stopped my watch and thought for sure I had a 21:59. The official results said 22:00, and that irked me. I know it's just one second, but I was giving myself a 31-second window of of my PR and I didn't do it.

Jessica crossed immediately after me and told me that I really helped pull her through. I thought that she really helped me! The power of teamwork! It was a strong race-- well executed and fun, but I didn't feel the pain that I do when I go all out in a 5K. Granted, I wasn't really planning on going all out anyway, but not getting that sub-22:00 just left me feeling somewhat unsatisfied.

It was a course PR by 18 seconds so I am not complaining. I just thought I could have done better.

I got very little sleep that night. I always workout in the morning, and never have a problem falling asleep by 9:00. But last night, I was amped. I fell asleep at 10:15 and woke up at 3:30am with that adrenaline rush feeling. I was awake until about 5:00am, and then the alarm went off at 5:45 for the next race.

Brambleton Ribbon Run
When I decided to do the Crystal Run 5K, I told myself that I would do the Brambleton run as an easy run at my easy training pace. And if my legs were at all sore, I would just spectate. But I woke up with legs feeling fresh. This kind of bugged me because it was yet another reminder that I didn't push myself like I could have in last night's run and I still had the urge for speed.

Greg and I got to the race and warmed up. It was sunny and high 40's-- beautiful weather for a 5K. During the warmup, my legs couldn't at all feel the effects of the 5K, so I decided that I would run this race at a harder effort than training pace. I had run this course on New Year's eve and did horribly. I ran my slowest 5K in years because I went out too fast on the first hill and blew up. I was also coming off of an injury, so I wasn't in the best shape.


Mile 1: 7:20
The race starts on a long uphill (about 2/3 mile uphill). I went out feeling relaxed, not pushing anything and decided I would just run by feel. I reached mile 1 with plenty of energy and legs still feeling strong, so I decided that this would be a tempo run.

Mile 2: 7:19
My tempo pace for a 5K on the track is about 7:10, so on a hilly course I thought that keeping it just under 7:20 would be good. But I really was not at all concerned with time. I did look at my Garmin for curiosity's sake a few times, but I just kept the effort level steady. I had no goal other than to maintain tempo effort. Clearly I was not in need of a tempo workout, but I just wanted the mental practice of staying strong. Plus, I had fun passing people.

Mile 3: 7:14
There's another nasty hill that's about 1/3 of a mile toward the end of this race and it hurts every time I do this course. I'm almost always forced to slow down. But this time, I was actually able to maintain my pace (although the effort increased) and then enjoy the final downhill to the finish.

Last 0.13: 6:22 pace
I find it interesting that my final kick today was actually faster than it was last night. But I attribute that to the fact that Crystal City has that uphill turning finish, and Brambleton is more of a straightaway.

My time was 22:41, placing 4 out of 176 in my age group. Ironically, when I ran this course on New Year's eve, I was slower and placed 3rd in my age group. I guess you never know who's going to show up. I do feel like I got my revenge on this course. My time wasn't fantastic, but I didn't blow up by going out to fast, and this was all within 13 hours of another 5K race.

Greg has been sick all week, so he also treated the race like a tempo, running a 22:30. He, however, did not partake in the Crystal City run. It was a strong run for him after 5 days of no running. I'm so glad he's on the mend!

My Sister's Finish
I watched with excitement as the 10K runners came in, looking for my sister. She and two of her friends came in at about 1:04, looking strong and happy. I was so excited for her! I think I almost have her convinced to run the Army 10-miler with her friends. She thinks that 10 miles sounds like a long way, but I assured her that by October, she could definitely be in shape for it.

What else is in store for me this weekend? I actually have a long run planned with my teammates for tomorrow. I hope my legs don't fall off because we are planning to go quite far. But I'm glad I'm pushing the envelope. My legs feel great, I don't feel any aches or pains, so I think I will okay in terms of not getting injured. I'm taking the "just go with it approach" and really enjoying it.