August 14 marked the one-year anniversary of my marriage to Greg. It's been the best year of my life and I never imagined that I would be so happy.

To celebrate, we decided to go to a resort on the Chesapeake Bay where we could relax for a few days. But before we left, we thawed out the top tier of our wedding cake which had been wrapped in foil and stored in a large plastic freezer bag. It was a chocolate chip cake with milk chocolate ganache, caramel and chocolate candy crunchies. Several of our guests told us it was the best wedding cake that they had ever tasted, and I would have to agree. How did it taste a year later? Still good, but not nearly as moist.

The bottom layer was the same flavor as the top, but the middle tier was a red velvet cake, which matched the colors of our wedding-- red, white and black.

Anyway, enough about the cake! We headed out to Maryland on Sunday at around noon. It was nice to spend most of the weekend in our own home and then have three days away.

The first thing we did when we got to the resort was to go exploring. The area was just breathtaking. We walked along the bay and familiarized ourselves with all of the great amenities of the resort-- several pools, miniature golf, a few shops, tennis courts, a game room, a "library" with a bar, restaurants, and a giant chess board. For our first night's dinner, we went to the Blue Point Provision, which is a seafood restaurant on the resort. The food was excellent, and they even brought us a free dessert with a candle in it for our anniversary!

The next morning, we set out for a run. Greg had mapped out a route that brought us into the town of Cambridge, but I was worried that the roads wouldn't be run-able. Luckily, on our way out of the resort, we realized that the golf course had a path that was perfectly suited for running.We started at hole  13 and wound up back at the hotel just two miles later at hole 18. Greg and I ran 9 miles, and then I realized I was still feeling pretty good so I ran another one for a solid 10-miler. (Greg has been having issues with his foot and his calf, so he's actually just easing back into running after some time off).

Who knew that golf courses were the perfect "course" for running?


Surprisingly, we were the only runners out on the course. Maybe we weren't supposed to be there, but it was early and none of the grounds keepers seemed to mind. On Tuesday, Greg rested his calf and foot while I headed out for 9 miles. I was a bit worried for my safety in some of the more remote areas of the course, when there was not a single person around. But it wasn't long before more of the groundskeepers started to show up.

Going into the trip, I was a little worried that we wouldn't find a suitable area to run, but I had a fantastic 10-miler on Monday followed by a 9-miler on Tuesday with no problems.

On Monday, we spent most of the day lounging by the pool. I personally don't need too much in a vacation other than to just chill out by a pool or on a beach. I prefer these types of vacations to the more active vacations because I'm always so busy and active during my normal life. I need time to just sit and do absolutely nothing, with the sun shining down on me. We found a wonderful French restaurant a few miles away from the resort to have dinner on Monday night.

Tuesday was more of the same-- just lounging around by the pool. We treated ourselves to a couples massage at the spa and it was amazing. Usually spa massages don't do anything to really relax the muscles-- you have to go to a sports massage place to really get all the knots worked out. But I was pleasantly surprised. We asked specifically for a deep tissue massage and both of our massage therapists delivered.

One of the cool things about this resort is that they encourage you to toast marshmallows in their fireplace and make 'smores. This was a lot of fun, except for there were A LOT of bugs and I kept getting bitten, and there were kids everywhere, dangerously putting marshmallows on fire. 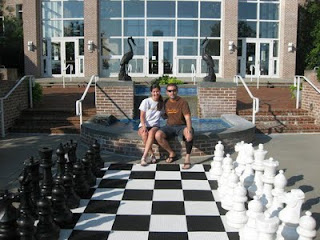 As I mentioned in a previous blog, Greg and I have recently taken a strong interest in Chess. We play it all the time and we knew that there would be a giant garden chess set at this resort. Our first game lasted a really long time. Mainly because I couldn't checkmate Greg, but I could keep putting him in check. And I was afraid he's gain an advantage if I let him make a move where he wasn't trying to get out of check. So I chased his King around for nearly half an hour until I finally figured out a way to checkmate him. He won all subsequent games.

On Wednesday (this morning) we spent some time playing around in the pool, but then we had to check out and head home. It was a short trip but really nice to get away and celebrate our marriage.

Shortly after arriving home, we headed for a not-as-fun pool for some pool running and swimming. I was impressed with our motivation to go workout when we got home instead of looking at photos, blogging, etc.

It was a fantastic trip and I'm so glad we got to spend this time together!
at 7:32 PM