Today wasn't what I expected it to be. After waiting over a year since my last marathon to try again, I was really expecting to blow it out of the water with a 3:35. Even so, my strategy was to start out conservatively (slower than BQ pace) and then negative split.

Expectations & Training Analysis:
All the signs pointed to a BQ (3:40) being attainable, with something like 3:35 being perfectly realistic.

1. In March 2008, I ran a 3:51:49. This was based on a 7-week training cycle, averaging about 40 miles per week. Since then, I have had quite a few marathon training cycles, each one peaking at 55 miles per week or more, and each one at least 12 weeks in length. I would expect significant improvement based on this training.

2. In March 2009, I ran a half marathon at 1:44:04. This predicts a marathon from 3:37-3:40, depending on whose calculator you use. This was over a year ago, and my fitness level has increased significantly since then, and I have continued to train with weekly mileage in the 40s and 50s.

3. Most recently, I ran a 5-miler in 37:10 and a 5K in 22:21. Both of these races predict times faster than 3:40. Although one could argue that you can't predict marathon times based on these calculators, I have always found my longer races (half marathons and full marathons) to be "faster" than their equivalent shorter races. In other words, endurance is my strength. My body works aerobically at a higher percentage of max heart rate than most people, which correlates to better performance in longer races.

5. The largest indicator was the fact that my paces per heart rate had dropped dramatically. I do all of my easy runs at a heart rate of 155-165. This is my "easy zone" according to a VO2 max test I took. With that in mind, my average training paces for the past 5 months have been:

I figured that to BQ, I would only need to run 20 seconds per mile faster than my easy pace.

For "marathon pace runs" I would target a HR of 165-174. This would usually correlate to an 8:10 or sometimes faster. This heart rate zone is below my lactate threshold zone. Most importantly, it felt like marathon pace. Just a tiny bit faster than "easy".

Today's Race
I went into this race with a great deal of confidence. I wasn't sick or injured, and the weather was reasonable. It was in the mid 50's and overcast at the start and rose to the low 60's and sunny at the end. These aren't ideal conditions for me, but they are decent, and I didn't think they would make me bonk.

I started out at a very controlled pace. I reached the halfway point at 1:51:45, which is a slower average than BQ pace. I knew that the first half was a net uphill and the second half was a net downhill, so I did this purposely. I figured that I could easily log 8:10's on the way back and smash the BQ. Only that's not what happened.

I was miserable. I was in so much pain and I didn't know why it got so hard for me. I was well hydrated (carried a bottle for most of the race) plenty of Gels, calories, etc. I had slept well the past few nights. I was a bit suspicious of that 18.5 miler two weeks ago, but that seriously felt "easy". Going into the race, I was a somewhat worried that I had missed my peak. I think I felt strongest in mid-April when I ran that 5K. All of my training was targeted toward a March 22 race, and then I just kept tapering, ramping up, tapering, etc. There was no structured "training plan" for today's marathon. I was just banking on the training I had been doing since September.

Even still, I don't think that any of this really explains what happened out there. Maybe the weather wasn't perfect. Maybe I missed my peak. But still-- I am in so much better shape than I was two years ago and yet I couldn't even beat that time!

In complete agony (both physical and mental), I crossed the finish line in 3:53:55. I do think this is a respectable time, but nowhere near what I am capable of. My fiancé was waiting for me, and I knew he understood exactly what I was going through. I didn't need to say a word. I was in shock, I was drained, I was in pain-- I felt broken in so many ways. I didn't speak for a good 10 minutes. I regretted not having gone for the PR two weeks ago. I regretted not "racing" the GW Parkway 10-miler at full effort when I was feeling amazing. I felt stupid. I felt I had sacrificed so much for this one goal, and I didn't even come close.

I started crying. I just felt so crushed, so defeated and so ashamed for having been so cocky. Guilty, even, for having solicited the support of so many of my runner friends. And that I let them down.

The race director approached me and asked me how I did, I just looked at him with tears in my eyes and said that I didn't do it. (He had known he was a BQ attempt for me). Everything I had worked so hard for. . . it all came down to this.

I met my friends shortly after and I perked up a bit. 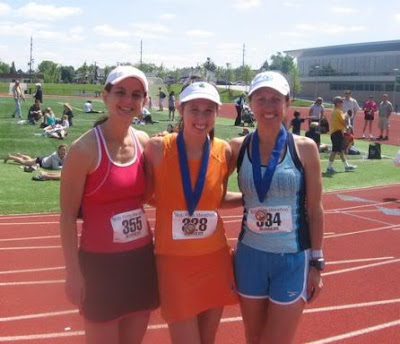 What I Learned
Maybe there was a higher power at work trying to teach me something by not letting me BQ or PR. Part of the reason I wanted this so badly was to cross it off my list and move on. I've been obsessing about it throughout my entire engagement and it's overshadowed the happiest time of my entire life! I guess what I've learned is that BQ or no BQ, I need to change my focus. I am extremely motivated and goal-oriented-- and it typically "works" to get me what I want. But for some reason, not in this case. And I think that reason is that I need to see the bigger picture of my life, appreciate what I have, and focus on all the wonderful changes.

As with all of my best races, it will come when I least expect it to. The week before I ran my 3:51 back in 2008, I thought I was seriously injured. I thought I'd probably have to drop out at mile 5. But instead, I exceeded my goal. In London, I was also injured and expected to drop out. But instead, I exceeded my goal. When I ran the Houston half marathon in 2008, I had been injured for three weeks, and I expected a 2:00 "fun run". Instead, I PRed with a 1:50. Completely unexpected. Two weeks ago, I wasn't even trying to run a marathon, but I ran a good percentage of it at an awesome pace given the weather conditions. When I least expected it.

From now on I think I need to go into races with no expectations. I should know where I am at fitness wise and what to target, but ultimately, I need to realize that every race is a gamble, an unknown. No matter how much training you do or how great you feel, the race could still be miserable. Or, no matter how badly you feel or how unprepared you are, you could rock it! I put far too much pressure on myself and from now on I am just going to back off and let it happen. With that approach, do I worry that I won't be as motivated to train? A little. But I know I will be more balanced if I keep a more laid back approach to this whole thing.

So. . . . what next? I'm running the NYC marathon with my fiancé. He got accepted through the lottery and it's going to be his first one. I am running it for charity. I'm going to focus on raising the $3,000 for the Central Park Conservancy, and coaching him to his first marathon finish. NYC is not a course to PR on (very crowded, lots of hills) and my intention with this race is to enjoy it with my fiancé. I'll create a training plan for him, train with him, and then run the race with him. The BQ is going to be out of sight and out of mind for awhile. I have a bunch of shorter races between now and then and I am just going to get out there and see what happens.
at 5:03 PM