Wednesday
On Wednesday of this week, I could tell that the weather forecast for today's marathon would not be in my favor. I decided that I would take the early start option (6:00am) and hope that the cloud cover they were predicting would be enough to save me from heat exhaustion.
Thursday
On Thursday morning, the first thing I did when I woke up was check the weather forecast again. Much to my dismay, they had added humidity into the mix, and raised the high from 87 to 93. The low went from 64 to 72. Yikes! Based on this, I knew there would be no way I could BQ. I have run marathons and half marathons in these conditions and I've always preformed poorly. Furthermore, I thought it would be dangerous for me to even run a marathon in these conditions.
I cried. I just started crying my eyes out. Yet ANOTHER marathon with unseasonably hot weather. Was someone up there laughing about me? I was about to go for a morning run and it was 45 degrees. Why couldn't the marathon be that day? Why couldn't the cold weather just hold on? It was so unfair. I've been chasing this BQ for so long. I know that I am more than capable of a 3:40 (I am thinking more like 3:35) and yet the weather always comes in and messes it up for me.
My fiancé and I went for our morning run and 5 miles turned into 7 miles. What's the point in taking it easy for a marathon that I knew I wasn't going to run? When we got back from our 7 miles, I hopped onto MarathonGuide.com and found the Bob Potts Heritage Trail marathon two weeks later. Even though the weather is more likely to be warm later in the spring, I didn't think it could get much worse than a high of 93. That's like a July marathon. Bob Potts appealed to me for three reasons:
1. It was within driving distance (just 2 hours away)
2. The course was mainly flat
3. It had a 6:30am start time
Later that day I mailed in my registration form.
Friday
On Friday, I decided to do a semi-challenging run to make up for the shorter, easier runs I had been doing during the taper. I ran a 10-mile progression run. The first 5 miles were at an easy pace, with my fiancé. He stopped there and I continued on for another 5, and I decided that increase my pace by 0:10/mile with each one. The last five miles were 8:37, 8:24, 8:12, 8:04 and 7:42. It felt awesome! While I was doing this run, I realized that there was no going back now. Doing a 10-mile progression run two days before a marathon is not something you're supposed to do!
Saturday
On Saturday, I emailed the race director and told him not to expect me because I thought it would be dangerous to run a marathon with the forecast I had seen. He said he was really bummed out about not getting to meet me, and suggested coming out for a training run. I told him I would run halfway and potentially more if I felt up to it. He then told me that other people were just doing half, so they were going to score a half marathon, too. Running-wise, I ran 5 easy miles on Saturday morning.
Sunday
I woke up, got dressed, took one Honey Stinger Gel from the pantry as well as a water bottle and headed out. When I got to the race, I started chatting with other runners. I told them that my plan was to just go halfway, and maybe a few miles after that if I felt okay. I told them about how I wanted to qualify for Boston, and I knew it wasn't going to happen in this weather, so I was going to wait two weeks for the Bob Potts marathon.
We started at 6:00. The race was an out-and-back on the C&O Canal Towpath-- done twice. So it was about 6.25 miles to the turnaround point. My goal was to keep my heart rate in the easy range, and maybe push a bit more toward the end. Here is a mile-by-mile recap.
1- 8:42 (Lots of women are passing me. That's okay.)
2- 8:37
3- 8:42 I stopped at a water station for about 1 minute and chatted with one of the volunteers who I knew. 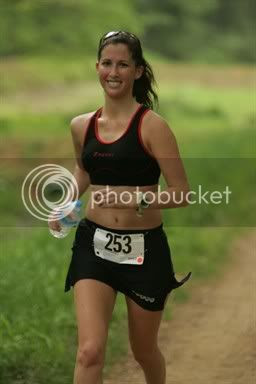 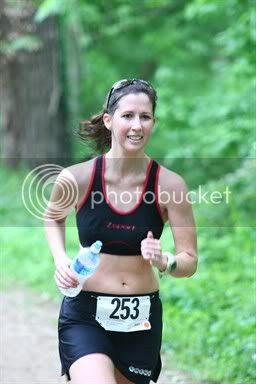 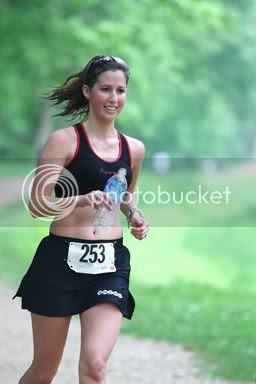 I started running again, but then turned right back around and decided to stop. I realized that my legs were tired, and if I went for it, my legs wouldn't be recovered in time for the Bob Potts marathon. 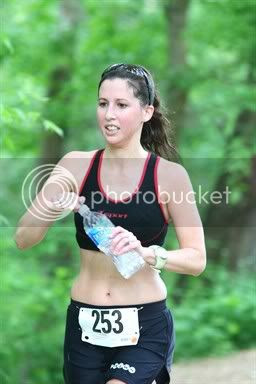 It was a tough decision. I was feeling a lot better than I expected to. I think that my problem with the heat is actually more the sun. Yesterday I was standing out in the sun at a garden shop and I felt completely zonked and like I wanted to lay down. But as soon as I got home, I totally perked up. I fared much better at this race then I did at Shamrock, and Shamrock was only 65 degrees when I bonked. The difference was the sun. Today was hot and humid, but the overcast sky definitely helped.
Other factors that I was thinking about during my run was that I had just done a 10-mile progression run two days ago, and my legs would feel that starting at mile 20. Additionally, I only had one Honey Gel. I could maybe overcome that by drinking a lot of sports drink at the aid stations, but it wouldn't be ideal.
So, BQ or bust. I hope I don't regret my decision and that in two weeks, I will get a 3:35 at the Bob Potts marathon!
at 11:54 AM