"Let's Just See What Happens" is NOT a goal!

Today I ran my 4th consecutive Lawyer's Have Heart 10K in Washington DC. I was in no shape to race a 10K this morning, but seeing as I have never missed a year of this race since I started racing, I figured I should still get out there.

On Wednesday morning, I woke up extremely fatigued with muscle aches. I had to cut my workout short, and I felt so tired that I didn't even go into work. The same thing on Thursday and Friday. It felt like I had the flu, or mono even, because I was so extremely lethargic and exhausted. Only there was no accompanying sore throat or congestion. I didn't work out Thursday or Friday, and I was fairly sure that the 10K race wouldn't be possible for me on Saturday. This was really de-moralizing because it was my first "official" week of marathon training with my knee recovered, and I spent it sleeping.

I woke up this morning thinking I would do the race. I didn't feel fatigued like I had the past few days. Then I checked the weather and learned that it was already in the mid 70's and humid. I decided that it would probably be best to just do a slow long run on the treadmill. But then I stepped outside and it didn't seem too horrendous, so I decided I should do it.

And then I told myself that no real good could come of the race. I knew I would get tired quickly in the heat and not even come close to a PR. So what would the point be? It was a disaster waiting to happen, that would only end in me feeling badly about my time. Well, this went back and forth at least 10 times until I finally decided that I wanted to go to the race. I would stop by the gym for a 1.5 treadmill warmup, and then do a 1.5 cooldown on it afterwards, so I could make up for some of the miles I missed earlier in the week.

I decided not to wear my iPod for this one. And I'm not sure why. I think that if I had it, it might have actually helped motivate me. A few weeks ago, I was thinking that my target goal would be a course PR: sub-50:59. Not a distance PR because I have been doing almost no speed work, thanks to my knee injury. But now with the mystery illness and the muggy heat, my plan was simply to use the race as a tempo workout. And my goal: "let's just see what happens." 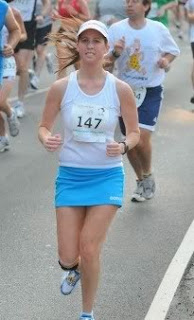 "Let's-just-see-what-happens" really doesn't motivate you when times get tough in a race. I went out at a pace that I considered conservative (8:30) with plans to speed up later in the race. I clocked an 8:20 for the second mile, so I was on target for getting faster. But then the heat really started to get to me, my back began to ache (like it had been earlier in the week), so I slowed back down to an 8:30 for the third mile. I have to add here that I saw a woman running in velvet pants. Yes, navy blue velvet pants. My only thought was that she was using this race as some kind of hot weather conditioning.

After the third mile, I sort of decided that I was done with the race. I was really tired, I knew I wasn't going to get a course PR, and I didn't even have a goal other than "let's-just-see-what-happens." I clocked an 8:49 for the 4th mile, and told myself that I just had a nice 4-mile tempo run. (Actually, my "tempo" pace should be a lot faster, but given the heat, it was certainly tempo effort).

During the 5th mile, I walked through a water station, and just couldn't get going again. I didn't really want to. I couldn't believe I was walking during a 10K, but it felt so good to walk! After nearly a minute, I reminded myself that I was in a race. Oops. I began to run again, but at a very easy pace. I was so hot and tired that I just wanted to get to the finish line. 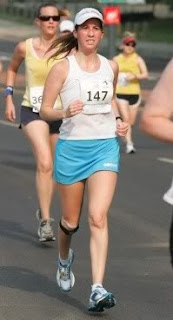 My last two miles were both at a 9:38 pace (including the walking). This doesn't really make sense to me because I walked during mile 5, but not mile 6, so the pace shouldn't be the same. But it was. I crossed the finish line in 55:25 for an average pace of 8:55. Yeah, I ran the Shamrock marathon at a faster pace. It was pretty upsetting to make the realization that I couldn't even run 6.2 miles at the same speed as I ran 26.2 in March.

I know that I lost two months of solid training because of injuries and am just now getting into it. And that I had been sick for most of the week, But still. This is the slowest I have ever ran this race, by over two minutes.

To regain some confidence I have registered for a 4-mile race next weekend. It's an evening race, and I typically don't have much energy at night, but I need to redeem myself! I'm not terribly disappointed because I did end up running a total of 9 miles today, 4 of which were at a tempo effort. Additionally, my knee was pain free! I used the taping technique that my physical therapist showed me, as well as the patella strap. I'm feeling pretty good now, so I hope to be on track with week two of marathon training.
at 9:03 AM