As many of you know, I was very torn on my decision to drop my Houston Marathon registration down to the half marathon. But because I was injured for three solid weeks and only ran once during that time, I thought that I wouldn't be prepared to run a full marathon on January 13. I decided to run the half marathon instead, because I already had my plane ticket to Houston, I was excited to see my friends Randi and Susannah, and I wanted the experience of such a large, well-known race.

Susannah picked me up at the airport on Saturday morning. On the plane, I met a wonderful woman named Valerie, who lives in DC and was running the marathon. This would be her 15th, and she was trying to beat her 3:28 PR. I was very impressed with her, and I was inspired because she said she had been running marathons for five years before she qualified for Boston. When Susannah and I got to the expo, we met up with our friend Randi. Susannah wouldn't be running, but Randi was going for her second marathon, with her first being Chicago. (I was supposed to run Chicago with her last year, but I was injured.)

We also met up with Michael Hayden. It was great to see him! Mike has been at my past 4 races, so it's not a race without him there! I slept well that night. Very well. I typically sleep horribly the night before a race, especially if I am not in my own bed. But I wasn't nervous or anxious or anything. I didn't have a time goal, and I wasn't expecting to be anywhere close to my PR. I was just looking forward to a fun day.

Before the Race
I woke up early, as usual, and got dressed for the race. They were forecasting for the upper 40's, which means long sleeves, but once we got to the race, it felt like it was in the lower 50's, which meant a tank top and gloves. I did get a little hot during the race, so that ended up being a good choice. Mike Hayden found me among all the people and we proceeded to walk to the half marathon start, and Randi walked to her marathon start. I stopped to go to a porta-potty, but I didn't lock the door. Typically, the lines are so long, that everyone assumes the porta potties are full until someone comes out. So, of course, this guy opened the door on me as I was doing my business! I screamed, and he apologized. But it was really my fault. And it was pitch black in there at 6:45am.

Mike and I tried to get close to the front of corral, but we were later than most people, and we didn't get up very far. I was worried about having to weave through a lot of people. There were two waves, and we were in the first wave. But inside the wave, there was no corralling so that the faster runners would be in the front. Once again, this didn't bother me too much because I wasn't trying to get a PR, or even a specific time goal. I just wanted to do my best, and see what would happen.

Miles 1-4
The first few miles were really rough. I felt like I was walking through some of mile 1. The crowd was so tight. I didn't want to waste energy weaving through people, but I had no choice. I had to pass the slower runners if I wanted to maintain a good pace. I missed mile marker two. Some time after the third mile marker, I noticed my watch stopped. 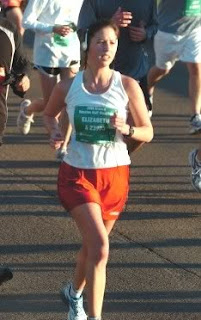 Typically, having my watch stop like that in the middle of the race would have really upset me and discouraged me. I NEED to know my time! Or so I thought. But I only panicked for a moment, because I wasn't even going for a time goal. In fact, I thought it would be kind of neat to run a race "blindly". I decided that from then on, I would track my mile splits, but I wouldn't know what my actual time for the race was.

At about mile 5, I caught up with the 3:45 marathon pace team. I decided I would try to keep them in sight because that was approximately my half-marathon PR pace. I wasn't expecting to maintain it, but I was going to try as long as possible. And it felt good at that pace! This course was very boring. Not scenic at all. Some buildings. Some stores. Some residential areas. Really nothing exciting at all.

And surprisingly, the course was not flat. The course advertises itself as being almost entirely flat, so I didn't expect any hills. And there were some! The New Jersey marathon is a flat race. The Delaware marathon is a flat race. Houston, in comparison to those, is not flat! Richmond was hilly, but I was mentally prepared for the hills and I knew where they all were. Every time I had even the slightly incline in Houston, I got frustrated. It was supposed to be flat!!! I was able to track my splits on my watch:

Miles 9-13.1
By mile 9, my left foot started to hurt--right under my big toe. This was where my physical therapist said my leg problems were stemming from. My foot had been out of alignment. Aside from that,
though, the rest of my leg felt great. I was really enjoying the race and the pace was easy.

In fact, I was surprised at my watch splits. I couldn't believe I was averaging around 8:20-8:25 for my splits. My PR pace was 8:37, so starting at mile 9, I realized that there was a chance I could actually PR! I had no concept of the pace of the first few miles, but it seemed like I was going the same pace throughout.

At mile 9, I saw Michael Hayden in front of me. He was injured, so he was running this race for fun and not for time. He had said in the beginning that he was going to go out at an easy pace (for him) and then see what happened. He looked like he was hurting, so I stayed back and ran about 15 feet behind him until around mile 10.5. We ran side-by-side for about half a mile, and I enjoyed the comraderie. 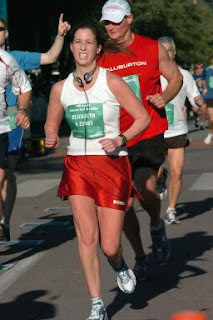 And then he started to pick up the pace just before mile marker 12. My pace started to feel tiresome at mile marker 11. But I needed to maintain it for two more miles in order to secure my PR. So, I repeated in my head, over and over: "Houston is my PR, Houston is my PR". (There is an advertisement in Runner's World that says this- promoting the race as being fast and flat). I kept repeating it over and over until the finish line was in sight. It really worked!

For the first time, I was not super into my iPod. I did have it turned on, and I was listening. But I was really not using the music to my advantage. It was more background noise as I coasted through the streets. It actually felt easy. And so good to run-- after three weeks off!

After the Race
After the race, I got a finisher's t-shirt (yes, you get two shirts in the race, and the finisher shirt is from Under Armor). The post-race food was excellent for such a larger race. The Marine Corps Marathon has really horrible food. They offered bagels in a variety of flavors, bananas, muffins, breads, sausage, eggs, muffins, hash browns, yogurt, juices. Yum! 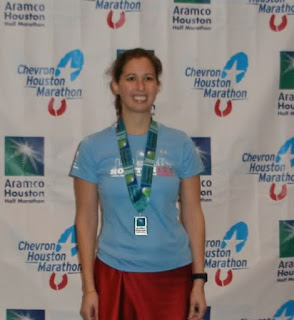 I re-united with Michael Hayden, who finished a little bit ahead of me. I met back up with Susannah, and then we went to watch for Randi to finish the full. Last spring, Randi and I ran in New Jersey together. I did the full marathon and she had run the half. After completing the half, she came back to cheer for me, so I was glad to return the favor. She finished in 4:18! Great job on her second marathon!

Lessons Learned
I think the biggest lesson I learned was to relax more during races. I didn't have my watch keeping track of the elapsed time, and I didn't freak out about it. I didn't have a goal time in mind. I just went into the race with an attitude of doing my best and enjoying it, and it really worked for me. I took three whole weeks off from running (with the exception of a 4.5 mile treadmill run one day) and I still PRed by two full minutes. This goes to show you that sometimes rest really is in order. And that it won't kill you to take some time off. I also learned that my iPod is really not my savior. Yes, it motivates me, and yes I will continue to use it. But for this particular race, it was more of an accessory than a critical part of the race experience. I'm not sure why, but I just wasn't that "in tune" with the music.

Thank you for everyone who tracked me and texted me to wish me good luck and/or congratulations. I was really shocked by this race, and now I am uncertain as to the best approach for the next one!
at 4:38 PM