Sometimes the best race is the one you don't.
My friend, "Freaky McRunner" recently posted a blog about not going for a run, even though she wanted to, because her body was telling her not to. My body (as well as some friends and a few doctors) cautioned me against racing the NYC half marathon on Sunday, so I listened.
I arrived in NYC on Saturday afternoon without my timing chip. I own my personal race scoring chip, and I used it to register for the race. Therefore, I had made the decision when I left my home that I would not be timed during this race. The plan was to run part of the race for the fun of it, and then take the Subway or a cab to the finish line and meet up with my friends.
Jenna and I met up at Penn station in NYC. From there, we went to her father's apartment where we would be staying that night. Jenna and I were supposed to also be meeting up with our friends Randi and Kimberly. But Kimberly was injured and Randi (from Texas) had her travel plans fall through. So, it was just Jenna and me.
After a quick lunch, Jenna and I headed to the race expo where we picked up our bib numbers and t-shirts. It wasn't much of an expo because the race was sponsored by Nike, who didn't want any competing companies there. The race t-shirt, however, is now my favorite one of all time, which is saying a lot. They had both male and female versions, the material is dry wicking, and the design is great. Jenna and I met up with my friend George (whose MySpace name is "Runner- aka La Lynx") at NikeTown and chatted for while.
Afterwards, Jenna and I found an amazing Italian place to have dinner at, did a little shopping and then went back to her father's place to go to sleep. The next morning, Jenna and I woke up super early, because we had to be at baggage check no later than 6:00am. We took a cab to the start line, and then got into our assigned corrals. I was assigned to the 5th corral based upon my projected finish time, but I decided to run back in the 7th corral with George.
I realized that I forgot my iPod. And then I realized this was a blessing in disguise. Not having my iPod would allow me to chat with George, really take in the race scenery, and pay more attention to my body. Plus, the music's main purpose is a motivator, and I didn't want any motivation to run this race fast. At the start line, George told me that the best part of the race was mile 8. Running down 7th avenue and into Times Square. She said that in Times Square, there was a Subway that would take me directly to the 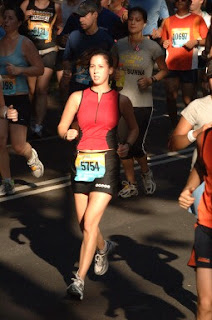 finish line. So, my plan was to run 8.5 miles at an easy pace and then stop.
The race started and George and I were off. Jenna was in corral number 4, so she was far ahead of us. George knows NYC like the palm of her hand and provided such wonderful commentary as we ran through central park. I told her that she didn't need to waste energy talking, but she was so proud of her city! And I was really lucky to have my own personal tour guide through the park. My foot felt pretty good, although there was some minor discomfort. My knee was also bugging me, from that bike ride in Italy a few weeks ago. It was a wonderful experience to be running in a race, but not racing it. I was doing this for pure enjoyment.
At one point, we passed my grandparents' old apartment. They are deceased, but for over 50 years, they lived in an apartment on Central Park West. We ran very close to it. My father grew up in that apartment and Central park was a huge part of his childhood. At around mile 5, I stopped to go to a porta-potty and George continued on. I re-adjusted my shoes, (thanks for the lacing advice, Josh!) and then continued to run at about a 9:30 pace, which was a minute slower than I would have raced at. (Based on my training, I would have tried to run at an 8:30 pace). It was a great feeling to cross the timing mats and just not worry about what my watch said!
At mile 7, I finally got out of the park. Don't get me wrong-- it's wonderful to run in Central Park. But it's rather hilly and it getting boring after awhile. At mile seven, the park opened up onto a huge street with a ton of fanfare. There were bands, balloons, cheering crowds, video cameras. I felt like such a celebrity. It was an amazing experience. Just running down that street toward Times Square was worth it. If I made my foot worse in the process, it was worth it to have that incredible experience. 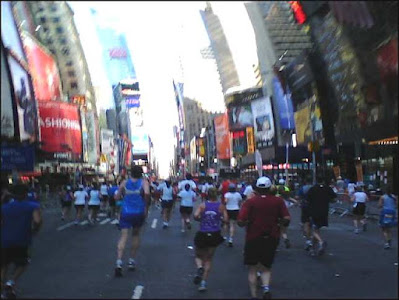 I was running with my phone in my skirt pocket, so I started taking photos as I was running. As a result, they were blurry, but I think I captured the essence. Like George said, I saw a huge Subway sign at mile 8.5, just as I was finishing the Times Square portion of the run. I hated to do it, but I ran over to the side of the road, pulled the metal fence out a bit and walked off the course. I could have physically kept going, but the plan was to not complete the 13.1 miles and risk making my foot worse. Plus, my knee was really bugging me (and I am getting it checked out on Thursday). My knee actually hurt more than my stress-fractured foot, and it had been my that had prevented me from doing the long runs I had wanted to in previous weeks.
I kept reminding myself that I was doing the best thing for my body, and I had my sights set on the Chicago Marathon. Chicago is much more important to me than my other races, and I really think I am capable of running that race in under 4 hours. It would be a huge milestone for me.
So, I got on the Subway and rode down to Battery Park. It was a long Subway ride, and I kept thinking 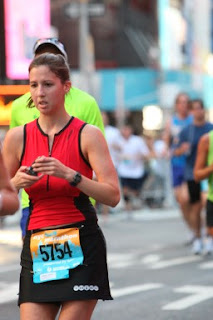 how much I would rather be running that distance. When I run, it never "feels" like that long of a distance. I am always amazed that a marathon distance is like my commute to work and halfway back. It seems insanely long, but while I am running it-- it feels much shorter. I got off the Subway and saw people running toward the finish line. My heart sunk a little bit, because I know how amazing that feeling is! I saw people wearing the finisher's medal, and I knew that I wouldn't be getting one of those.
I was hoping for a NY Bagel for post race food, but all I got was a disappointing bag of hard pretzels and a pear. I found Jenna, who ran the race in a super-quick 1:51. I didn't meet back up with George, but I later received a text from her with her time. Jenna and I walked nearly two miles to get to the Subway that would bring us back to her father's apartment. The walking actually hurt more than the running. Not quite sure why! NYC is definitely a walker's city, and I think the amount of walking I did over the weekend did more harm to my foot than the 8.5 miles I ran.
All in all, I had a fantastic experience and I knew I made a smart decision by not running hard, and not running the entire 13.1 miles. I didn't see the point of going all the way to the finish line if I wasn't going to put my best running foot forward. I really hope that this decision pays off for me and my stress fracture heals in time for me to adequately train for the Chicago marathon. As is, I have already missed two weeks of training, and several long runs. But many runners have said "better to be under-trained than over trained". In the meantime, I think I will hone my swimming skills.
I stayed in the city until Monday afternoon. I met up with my friend Austin and we explored the city as much as we could with my foot and knee bothering me. We saw the Simpson's movie, which we both really enjoyed. We went to a diner that I had gone to with my family the last time we were in NYC visiting my grandmother. I got my favorite multi-grain Belgian waffle topped with fruit and yogurt. Yum! And I finally got my NY bagel, which I had been craving since the end of the race. Special thanks to George (la lynx), Jenna, and Austin (all of whom read this blog) for a fantastic weekend! We missed you Jenny, Kimberly and Randi!
at 1:51 PM