This morning I ran the Cure Autism Now 5K in Potomac, MD. I also ran the Elizabeth Goldman Treadmill 5K in Fairfax, VA. One race was hilly, painful, slow, and run without music. The other was pancake flat, fast, and featured some of today's best alternative rock hits.
I made a decision over the weekend to run the Cure Autism 5K without my headphones. There were several reasons behind this. The primary reason was that I really wanted a mental challenge, and to prove to myself I didn't need my music to run a strong race. Who knows, I might even do better!
I've been running toward the front of the pack and placing lately, and none of the runners around me are listening to iPods, so I figured I would ditch mine just this once. I told myself that I would not regret this decision during the race or afterwards, no matter what the result was. I've raced without headphones before (with slow times) and I wanted to experiment.
I felt really good about this race. Yesterday, my hip flexors had been hurting, but they felt fine this morning and I felt very prepared. I did a 15-mile training run on Saturday, and have taken it easy every day since in preparation for today.
My father and his wife came! This was the first race that they have ever expressed interest in attending, and they actually showed up about 10 minutes before the race start. I was very happy to see them and have my own cheering section that would be waiting for me near the finish. During the race, I kept telling myself to "make them proud" and do really well, since they had woken up early on a holiday to see me race.
The race began, and even though I started close to the front, I had to do a lot of weaving and passing slower runners. I'm sorry-- but if you have a 6-year-old with you, do NOT line up at the front! I told myself it was okay because I didn't want to go out too fast.
After 7 minutes, I started looking around for a mile marker. There was none. At 7:30, there was a tripod that looked like it could have held something like a timing clock. I didn't see any mile markers or anything after that. It was therefore hard to pace myself and determine if I was going too fast or too slow.
Since I didn't have my iPod, I was more aware of the physical noises I make while running, as well as other peoples' breathing and grunting. I think I am a very vocal runner. I actually uttered the word "shit" a few times when it really hurt and I was pushing myself to the limit. I didn't notice the lack of music so much as I noticed the new sounds around me. From a safety perspective, I don't see how this type of running is any safer. Although I could hear runners coming up from behind me, it's not like they were trying to ram themselves into me.
I felt "comfortable" until about the last mile when things started to hurt. The course was extremely hilly. Lots of uphills and not many downhills. Before the race started, people had been talking about how 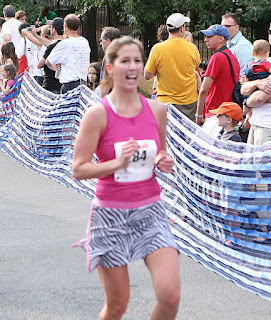 difficult this course was. The last 0.1 was an extremely steep downhill. So steep that it really took a toll on my quads and hips. I like to sprint to the finish, and this was one painful sprint. It sucked having to run up constant uphills for one extremely steep downhill right at the end, when I would have had the adrenaline to sprint anyway. I waved and smiled at my dad and his wife as I was coming down this steep hill.
I was really pissed at my time: 24:06. I ran a hilly 5K in 23:30 just a month ago. This one was definitely more hilly, and the slow start certainly didn't help, but it didn't make sense that I would add so much time on. In fact, the 5-miler I ran in March was run at a faster pace than this race. And my 4-miler from a few weeks ago was also run at a faster pace.
After the race, I chatted with my dad and step-mother, and my father was getting impatient, so they left before the awards ceremony. I didn't win an award, but that was to be expected. The race had 850 runners, and a lot of them were super fast. I did meet a really awesome woman who was just getting into running. She complimented my zebra skirt and then we spent about 20 minutes chatting while waiting for the awards ceremony.
I have no idea how I placed with regards to my age group or gender, because results weren't organizedthat way. I left the race and headed to the gym for a cool down run. I stretched out for about 10 minutes and then hopped on the treadmill. Ah-- a flat surface! Ah--- my iPod!
My recovery jog suddenly got a burst of energy and I jacked up the pace to 7:20, ran at that pace for a little, and then settled in at a pace of 7:45. I told myself I would just do a quick mile and then cool down, but I felt amazing! The music was really energizing and I had tons of adrenaline. I ended up running an entire 5K, and beating my race time! My treadmill 5K was 23:50, and I wasn't even running at 100% effort
Considering I had just raced a 5K, I thought this was pretty impressive, and my self-confidence was boosted to it's pre-race level. And hey-- I came in 1st place! My award: A Starbucks Frappuccino.
I'm really sore now-- shin splint in the right leg, sore calves, hip flexors are killing me, but I am glad I did another 5K to redeem myself. I've been training hard lately and I've been sore a lot. The rest during my Italy trip is much needed. No more racing in July. The next race is the NYC Half marathon on August 5. 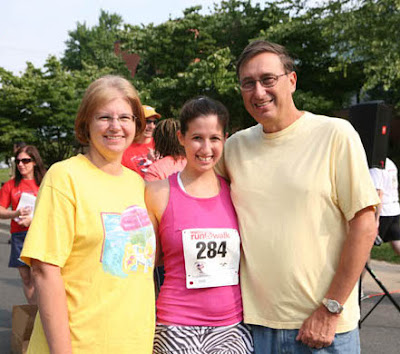