I wanted to run a 5K because I had not run once since the Turkey Trot last November. 5Ks are torture because you are going extremely fast and pushing yourself really hard, but the pain is over quickly. It's basically 20+ minutes of torture, for a victory and a "high" that lasts for much longer.
This is my third 5K and none of them have been enjoyable. In fact, each one of them felt like pure torture and I have always wanted to stop after two miles, and I always question why I subject myself to this. But then my mindset does a 180 when I reach the finish line. Thus, the 5K is a unique challenge in enduring the torture and just pushing and pushing as hard and as fast as possible.
My Personal Record for this distance was 23:32, and based on my training, I was hoping to run this race in less than 23:00. But the course was more challenging than expected.I would consider this course to be the "Boston Marathon" of 5Ks. The first mile is a steep downhill, and the last two miles are a gradual uphill.
I had read an article in Runner's World where they did a study of 5K times, and the study found that a good strategy is to actually go out faster than your anticipated pace. The runners who did this actually held this pace throughout the race, even though they didn't expect to. So I went out fast, and the first mile was a steep downhill, resulting in a 6:48 mile. I could hardly believe it. The second mile was mainly uphill, resulting in a 7:58. I wasn't happy about this, but I figured it was okay because I had banked myself some time with the first mile.
By the third mile, I felt like I was about to die. I was sweating profusely, the humidity was really hitting me hard, and my lungs were killing me. I really wanted to slow down and I was so close to just chalking 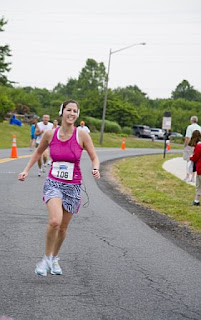 the race up to a loss and walking. I knew I wasn't going to get under 23 minutes, and I probably wouldn't beat my time from November. But then I realized that I had not seen any women ahead of me the whole race. I started the race at the front of the pack, and gunned it with a bunch of men, but I was fairly certain that I was in the lead in terms of women. When I realized I could actually win the race, I was motivated to keep going.
As I approached mile marker 3, I realized I could get a new PR if I sprinted. I did my fastest sprint ever, and came in at 23:30-- beating my PR by 2 seconds!
I felt like death for about two minutes afterwards, as I was gasping for air. But eventually I caught my breath and was fine. About 20 minutes later, the results were posted on the wall in order of finish. I scanned down the list of names, and I didn't see any female names ahead of me. And there was a "1" next to my name. I could hardly believe it!
As I waited for the awards ceremony, they handed out some door prizes. I won one of those! I won these amazingly good Oatmeal Raisin cookies from the Great Harvest Bread Company. I sat down at a table with another girl who was by herself and seemed to be around my age. She was super nice and we started chatting.
Finally, they began the awards ceremony. I was surprised that I was actually not the first female finisher. 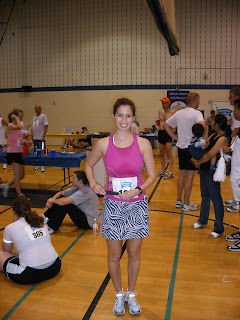 There was a 15-year-old by the name of Tomoka, who I had mistaken for a male in the results, who was actually the first female finisher. Time of 21:28. I was the 2nd female finisher, and 1st place for my division.
I finished 1st in my division
I finished 2 of 126 females
I finished 33 of 252 total runners (male and female)
My award is cool. It's this glass statue/plaque that says 1st place, Herndon 5K Festival. It was totally worth the pain and agony of mile 3!
My next race is a 10K on Saturday. I have minor shin splits at the moment because I wore lightweight racing shoes (non-supportive), but I hope they go away soon.
at 6:04 PM