My first 10K and second race ever was the Lawyer's Have Heart 10K in 2005, which a friend of mine convinced me to run. I typically ran 5-6 miles on a treadmill, so I figured I could handle a 6.2 mile race. I finished in 53:08, which I wasn't particularly happy about because my treadmill times were often faster. But there is an obvious difference between running outdoors and running on a treadmill: hills and heat.
This 10K only has two significant hills, and is pretty much flat otherwise. I would rate the course as "medium" in the difficulty scale. However, this race is notoriously hot. The runners I spoke with after the 2005 and 2006 race said that the heat made them run much slower than usual. I was really frustrated when I did not beat my 2005 time when I ran the race in 2006. It was partially due to a crowded first mile, the heat, and still recovering from my first marathon.
I went into this race thinking I could easily beat my PR from two weeks ago of 49:55. But once the race started, I thought twice. The race starts under a bridge, and then is sunny for most of the way. Parts are shaded, but most of the course is without shade.
As soon as I got out from under the bridge, I knew a PR was unrealistic. It was sweltering hot and I hadn't even started running. I think it was around 76-78 degrees, but it felt like it was in the 90s while running. The humidity didn't help, either. So, from the very beginning I decided I would enjoy the race and treat it like a good training run.
My first two miles were 8:00 and 7:40, but they felt comfortable. The second half of the race was 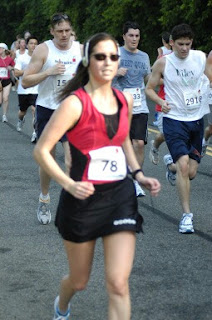 another story. The heat really started to take its toll on me and I slowed down dramatically. I was putting much MORE effort in during the last three miles, and yet going a lot slower. I hit the 5K marker at 25:15, pace of 8:07. I really wanted to stop and walk. I only actually walked twice-- at the water stations, but instead of walking, I did the "survival shuffle" just to get myself through those last two miles.
I was thinking I would just be happy to beat my 2005 time. Hell, I would be happy to come in in less than an hour! It was brutally hot. I won't say that this is the hottest race I've run, because I did a half marathon last July and passed out afterwards from heat stroke. This is probably number 2.
I finished in 50:59
I placed 79 of 601 in my division
I placed 168 of 1276 women
Average pace was 8:13
This was 1:04 slower than my 10K from three weeks ago, but over two minutes faster than my 2005 time. This pace is slower than my 10-mile pace. BUT-- I am actually really proud of myself, and I'm not beating myself up at all for this. It was so hot, and yet I kept going.
Ironically, 50:59 was my 10K time during the Cherry Blossom 10-miler. And afterwards, I sped up and run 4 more miles. I could not even imagine running 4 more miles on top of that 10K, especially at a faster pace. Just goes to show you how much the weather plays a role.
Enough analysis of that. There was an 8K (4.96 miles) this morning that I knew about, and I had been considering it, but I never registered because I am typically way too sore to run the day after a race, let alone run another race. But I woke up this morning, and my legs felt fine. There was some lingering soreness in my hamstrings, but nothing major.
Since I didn't run the 10K as fast as I could, my legs still had some "juice" in them to go running today, so I went to the race and registered on site. My friend Brianna was also running this race, but was doing it with her husband (who runs slower than she does). So we met at the race start, and then met up again afterwards.
I've never run an 8K before, but I have done a 5-miler, which is pretty much the same. Actually, scratch that. My 5-miler was 5.2 miles.
Anyway, I didn't have high expectations from the race this morning because I had just run the 10K yesterday. My goal was to just keep running at a strong, steady pace, and finish in a decent time. My pace during the Ashburn 5-miler was 7:44, and I didn't expect to beat that today. The weather for today's race was almost perfect. I really wish that today's weather had been at yesterday's race, because then I know I would have set a 10K PR. I would rather have one really strong race then two just so-so races. But because of the weather, that's how it played out.
This course was very similar to my other 5-miler. Constant rolling hills. No part of this course was flat. It was far more difficult than the 10K course from yesterday. Up and down and up and down. There was a nice down hill at the end, and I thought I was finished, but of course the race did end with a nice final uphill. I know my legs will be killing me tomorrow from the hills.
I basically just enjoyed the nice racing weather, tried to keep my pace steady, and did not walk once, not even for water!
Mile 1: 7:40
Mile 2: 8:02
Mile 3: 7:54
Mile 4: 8:04
Mile 5: 7:53
Finish time was 39:36, pace of 7:58. It's about what I expected.
Considering I did a 10K yesterday AND this race was so hilly, I think it's pretty good!
I placed 2 of 25 in my division (ages 25-29)
I placed 14 of 116 women
The woman who placed first in my division was about two minutes faster than me. Of course I am curious if I could have beat that time had I not done the 10K yesterday. But I'll guess I'll never know! Tomorrow will definitely be a rest day!
10K Playlist
Red Hot Chilli Peppers- The Zephyr Song
Tori Amos- Almost Rosey
30 Seconds to Mars- From Yesterday
Live- Meltdown (almost had one of these!!!)
Anberlin- There is no Mathematics to Love and Loss
Tori Amos- Secret Spell
Jason Mraz- Common Pleasure
Incubus- Anna Molly
The Red Jumpsuit Apparatus- Face Down
Anberlin- Reclusion
Tori Amos- Bouncing off Clouds
Anberlin- Readyfuels
The Love Theme from Flashdance
8K Playlist
Sheryl Crow- Steve McQueen
Five For Fighting- Devil in the Wishing Well
Tori Amos- Almost Rosey
30 Seconds to Mars- From Yesterday
Jason Mraz- On Love, In Sadness
Anberlin- There is no Mathematics to Love and Loss
Tori Amos- Secret Spell
Fall Out Boy- This Ain't A Scene It's an Arms Race
Anberlin- Reclusion
Tori Amos- Bouncing off Clouds
Anberlin- Readyfuels
Special Thanks to Michael Hayden for providing the iPod Shuffle!
at 6:25 AM