I ran the New Jersey marathon on Sunday. This was my 4th marathon ever, and my 4th marathon within a one-year time period. Previous marathons were Delaware, Marine Corps, and Miami, with times of 4:46, 4:24, and 4:13, respectively. My goal for New Jersey was to finish at 4:08 or faster. My friend Randi (from Texas) ran the half marathon, and I picked her up from the airport on Friday night. We drove to Philadelphia on Saturday morning to pick up our friend Jenny. Jenny was supposed to run the marathon, but she has two stress fractures and is now on crutches. However, she wanted to come and spend the weekend with us and watch the race. I was really happy she came because Jenny and I have run all of our marathons together, and some other races as well.

Randi, Jenny and I stayed at a bed and breakfast on the Jersey shore-- just seven miles from the race. The Jersey shore is beautiful, and the area where we stayed was midway up the state-- north of Atlantic City, but not in Northern NJ.

Our friend Kimberly, who lives on the Jersey shore, came to meet us at our Bed & Breakfast. She was running the half marathon as well. We went to the Expo and heard Katherine Switzer speak. She was the first woman to ever run the Boston marathon. Her speech was amazing and she was such a motivation to the four of us.

We then went to get our bib numbers and timing chips, and then out to dinner for a nice carb load. We went to an Italian restaurant and it was delicious. 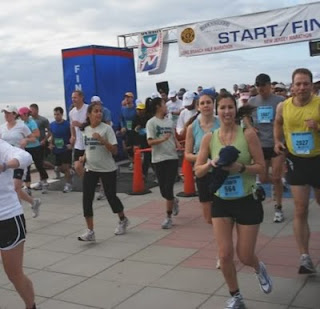 The next morning, we prepared for the race. I had a bagel and half a Zone bar, as usual and we were off. Jenny was on crutches, but she found a spot right near the start/finish line to take photos. She took a photo of me crossing the start line, just before I threw my jacket to her. (I decided I did not need it while I was in the corral).

The New Jersey marathon is a two-loop course. Each loop is 13.1 miles. The half marathon runners do the loop one time, and the full marathoners run it twice. The weather was cloudy and 55-60 degrees.


Miles 1-5
I started out at a pace of about 9:45. My goal was to cross the halfway point at around 2:05, and then do a negative split. Randi's goal was 2:06 for the half marathon, so she used me as a pacer in the beginning of the race. At around mile 4 however, I looked back and noticed she was gone. She later told me that I had sped up and it was hard to stay with me because it was so crowded and she kept having to weave in and out of people.
I decided to pick up my pace at around mile 4. That's when I passed the 4:15 pace group. I knew I would have to pass them during the first half, but I wasn't sure exactly when I would pass them.  During miles 1-5, I was taking 40-second walk breaks through each of the water stations, and running at a pace of about 9:30.

Miles 6-13
These miles went by extremely quickly. They are sort of a blur and I don't remember much. I remember that at mile 9 there was a river, and as soon as the river came into view, my iPod started to play "This River is Wild" by the Killers. I smiled. After the river, the song "Policeman's Xmas Party" came on, just as I was running by some policemen!  I recognized a man who must have been in his 70's running without a shirt and in red shorts. He had run Delaware. I took my headphones off and told him I recognized him from Delaware. He said he was running it again this year-- just three weeks later! Wow.  I hit the 10-mile marker at 1:34.

Miles 13-20
I crossed the halfway point at 2:03:38. I was feeling really good at around mile 8, so I had decided that I could probably get to the halfway point a little sooner, and maybe beat my goal. I reset my watch, so that I could time the second loop the same way I did the first. After crossing the halfway point, I noticed that the outside of my left ankle was really bugging me. It was my timing chip! This raced use the ankle chip, and I had velcroed it on too tight. Also, my ankles had probably swelled during the first half. I bent down to make my chip looser, but then it was too loose. So, after a few tries with it, I just moved the actual chip portion to the back of my ankle and it was fine. After the race, I had a huge bruise and a lot of pain where the chip had initially been. So my advice to anyone who runs a marathon with a Linmark ankle chip is to not velcro it too tightly.

At mile 15, I needed to have my second pack of Sports Beans. I do not like eating sports beans during races because they make me feel nauseous. However, they are better than gu or gels or gatorade, so I force feed myself them. Ew--- it was like torture having to eat them. They were the orange kind, so I told myself I was eating Ben & Jerry's peach cobbler ice cream. I told myself that this was the best thing I had ever tasted. And it worked! I ate the whole pack of beans over the course of a mile.
I was still feeling really good miles 14-20, so I picked up the pace to about 9:05, and shortened my walks to 25 seconds. Miles 14-20 were my fastest.  I hit the 20 mile marker at 3:07. 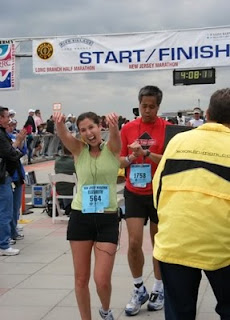 At mile 21, that river came up again, and my iPod played "Pain Lies on the Riverside". Purely by coincidence! It totally motivated me. I started to feel a lot of quad pain at around mile 21 and I really, really wanted the race to be over. Those last five miles were extremely hard, but I only slowed my pace slightly. I used every positive self-talk trick I new to keep myself from walking. Miles 23 and 24 seemed to last forever!

There was a relay going on and there were people running at mile 21 who just started the relay. They looked strong and fast, and I was in pain! But I tried to let those runners motivate me. I was passing a lot of people during the last five miles. Many people were walking. Many people were hitting a wall.  But the crowd support was amazing for such a small race, and my bib number had my name on it, so people were cheering: "Go Elizabeth!"


I really was tempted to walk during the last mile. It took everything I had to keep going. But I did!  The last mile of the loop was on the boardwalk with the ocean, so I just focused on looking at the ocean and tried to ignore the pain I was in. And I even sprinted to the finish line. 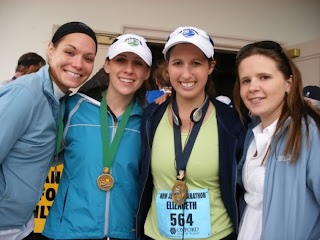 After crossing, I was given a medal and a finisher's hat. I was so focused, that all I could think about was adjusting that hat so that it fit properly on my head. I would not drink my bottle of water or meet my friends until I had that hat secured on my head. It was wierd. I guess I was just so used to being extremely focused on one thing that I became really obsessed with getting my hat on!


Randi met her goal of a 2:06. Kimberly met her goal of finishing, because this was her first half marathon. Three goals met!!!  Our other friend Jenna drove to the race from Philadelphia and had made us all signs. It was so great to see her. She is on the far right.

The post-race food was cornbread and chili. Yuck. They ran out of bagels from the half marathoners, so I didn't eat anything until we went out for a celebratory lunch. I wasn't hungry at that point anyway.


The pizza was amazing. And then we went on the boardwalk for candy and ice cream! Yum!
I was very pleased with my performance and the race was awesome. Having my friends there and a huge cheering section for me (4 of my good friends) was really motivating. The entire weekend was so much fun. The race itself was well organized, except for I did not like the post-race food.

My next marathon is the Chicago marathon in October. I think it's good that I am taking 5 months off from marathons so I can train really well and break the 4-hour mark in Chicago. I have a few 10Ks scheduled for this summer, and I entered the lottery for the NYC half marathon.  I didn't really learn anything new this race, only that what I have been doing for my past few marathons continues to work. I continue to run negative splits, be conservative with my pacing and goals.  I continue to be motivated by my music and positive mentality.  I continue to NOT follow a strict training program, but to listen to my body and train based on what I feel I need each day.