I've always said that the 10-miler is my favorite race distance, even though I have only ever run one of them in my life. I feel like a half marathon is just a little too long to go my fastest and a 10K is too short to get the benefit of my endurance.  I ran the GW Parkway Classic 10 miler last April in 1:26, pace of 8:44. 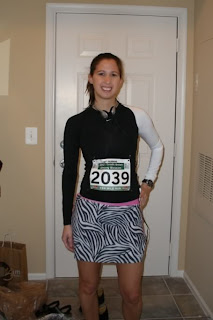 I woke up on Sunday morning, pleasantly surprised that there was no rain for the Cherry Blossom 10-miler. The forecast had called for rain all throughout the race, but it hadn't started yet. I dressed in my new zebra skirt, which I have never raced in, ate some pretzels and half a zone bar, and was ready to go.

My good friend Jenny (who I run most of my races with) had taken the train in from Philadelphia the night before and my good friend Lauren (who I ran the half marathon with last weekend) came over in the morning and we all took the metro it. It was nice not to have to worry about driving, or being stuck in a horrendous three-hour-long traffic jam like at the half marathon last weekend.


We arrived downtown where shuttle buses would take us to the start line. I was not happy to learn that they were school buses, because I have a hang-up with those from a bad childhood experience. Riding that school bus brought back some bad memories, so I tried not to think about it.

When we got off the bus, we walked about half a mile to the start line. I've lived in the Washington DC area my whole life, but I have never seen the cherry blossoms. As we were walking through the park area, I kept asking my friends "Are those the cherry blossoms?" Even my out-of-town friend knew which pink bulbs were cherry blossoms and which ones were not. 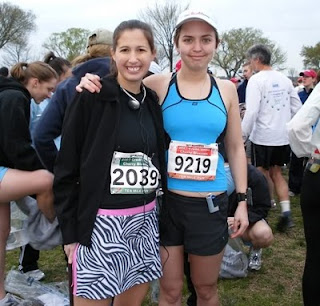 The race was very well organized. We were corralled by our bib numbers, and bib numbers were based on previous race times that we had to submit during registration. I think I had submitted my 5K time of 23:32, so I was at the very front of the second wave, bib 2039. I felt like I was surrounded by really fast runners and I didn't deserve to be so close to the front. But I also didn't want to be stuck at the back like in the half marathon from the previous weekend, having to pass a bunch of people in the beginning.


I was freezing at the start line, and I was upset that I had forgotten my running gloves. My fingers were numb and white, and I had to put them in my mouth (98 degrees!) to get feeling back into them. The temperature was announced at 51 degrees. It felt more like 45. It was overcast and there was no sun.

At the start line, I meet a woman who was 49 years old and had just run her first marathon in October-- The Marine Corps Marathon. She qualified for the Boston Marathon during her first marathon, and then shaved 16 minutes off of that time at the Shamrock Marathon two weekends ago. The weekend after the Shamrock Marathon, she ran the National Half Marathon, and now she was doing the 10-miler. . . followed by Boston in mid-April! I was amazed. 49 years old, she had just started running, and she was extremely fast. Her time for this race was 1:15:50.

She was also wearing a running skirt, by the same company who made mine. Hers was all black and she said she always raced in it because it made her feel confident and powerful.  I felt the same way in my zebra skirt and matching top.


Miles 1-3
I recently read a blog from my friend Christopher, who, like me, is usually very strategic about pacing himself. But in his most recent race, he really pushed the pace beyond what he thought was capable of, but he felt good and did it anyway. He told himself "don't think-- just run!"  While I believe that a race in mainly mental, I probably analyze my pace far too much during a race and I don't listen to my body as much as I could. So, I decided that I would try for an average pace of 8:20-8:25, starting at around 8:40 and decreasing to 8:00 by the end. My goal was to finish in 1:23.

My first mile was much faster than I expected. 8:10. After all, I was running with all the fast runners at the start of the second wave. But it felt good, so I just went with it. I planned to walk through the water stations later in the race anyway, so I figured maybe it was good that I started faster than planned.  As I got to the water stations, no one was really walking through them. Once again, this was because I was with the fast runners. I probably walked for about 3-4 seconds with my water, but that was all I felt I could do with everyone running so fast around me.  Mile 3 was my slowest mile (8:30 pace) because of a slight uphill and a water station.

The course was so beautiful. It was the POLAR opposite from the run-down neighborhoods in southeast DC from last weekend. We ran over bridges, near the water, and everything was in bloom. We passed monuments and I was so proud to call this place my home.

Miles 4-6
After a slow mile 3, I sped up for miles 4 and 5. I wanted to run negative splits, so I knew I needed to pick up the pace a bit, even though I was on track for meeting my goal.

My Personal Record for a 10K (6.2 miles) is a pace of 8:36. I set in it 2005 in the heat. When I came to the 10K marker of this race, I looked at my watch and I noticed that I was setting a 10K PR during a 10-mile race! There was even a timing matt, and I actually sprinted to the timing mat because I thought that the results would include it as a split. I think I hit the mat at excatly 51:00.

At this point, I could see the Elite women and super-fast men on the other side of the course. I was just amazed to look at their legs and see how fast they were going.  I was surprised by the lack of crowd support. There were 15,000 runners, so I expected the crowd support to be almost like that of the Marine Corps Marathon, but it was very minimal. There were no real crowds until the last half mile.


Miles 7-10
These were the hardest miles. We were running the reverse route of the Marine Corps Marathon miles 6-8 on Rock Creek Parkway. During the MCM, we started on one side of the road, and turned around to be on the other side of the road. This was weird because it was reversed. There was a nice downhill at the end of mile 7 that I was thankful for.

I was getting tired and I was worried that I couldn't keep my pace up. I hit somewhat of a wall at mile 8 and I just had to tell myself that I needed to keep going. Slowing down would only prolong the race. I got into this weird zone where I just blocked everything out except for my music and just focused on keeping the pace steady.

At mile marker 9, I started to feel this indigestion pain in my chest and a slight cramp in my side. But I knew I had only one mile to go, so I tried really hard to ignore the pain and just push through. As I approached the finish line, there were tons of people cheering, and I sprinted the last tenth of a mile.

My splits were somewhat negative, but not as negative as they usually are. I was happy to pull of a 7:48 at the last mile, despite the pain in my stomach.

Results
I was truly, truly amazed at my time: 1:21:23 and a pace of 8:08. I set a new personal record by over 5 minutes- and this pace is much faster than my 10K pace, ironically!!!  I think it was the zebra skirt. I felt so awesome in that thing.

Both of these put me in the 89th percentile, where I usually fall around the 85th percentile. This was one of my best races ever, if not the best. Especially considering I had run a hilly half marathon (+0.24) the weekend before.


What I Learned
I know that having a strategy is important. But if you don't push yourself outside of your comfort zone, then you won't know what you are truly capable of. If I had really tried for a 1:23 exactly, then that's what I would have gotten. But I surprised myself with a 1:21:23, and I couldn't be more pleased. 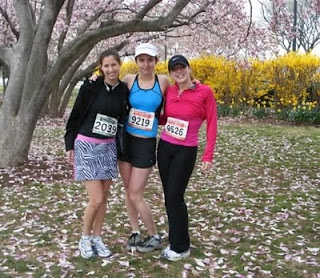 I easily found Lauren and Jenny after the race. I was even more cold after the race than before it, and my lips were turning blue. The only bad thing about this race was the post-race food. I have never run a race where they didn't have bagels at the end. And fresh ones. All they had here at the end in terms of food were bananas (which I hate) and packaged muffins. The muffins were gross, but I had one anyway.  Even that Half Marathon last weekend had like 5 different kinds of fresh bagels.  Whatever. . . I guess I can't be too picky!  It's free! (Well, sort of).

We walked back to school-bus shuttles and stopped for some photos in front of the beautiful trees.

What a wonderful day. I was so happy that it didn't rain and that I got to spend time with my two good friends.