We've reached that time of year when it's darker in the mornings and evenings, leaves are starting to fall off the trees, but yet here in the Washington DC area. . . it's still warm and humid! A few updates on how There are 10 weeks in between Indianapolis and Houston, which is a very quick turnaround, but I wanted to do it for a number of reasons. I've always wanted to run the Houston marathon (I've done the half twice) and I also want a season to focus on the half marathon as the target race, so I will be choosing a target half marathon in late March.

New Training Approach
While I've been using McMillan coaches for 8 years, this is my first marathon cycle working directly with Greg McMillan himself. Up to this point, my weekly mileage has been in the low 50s and the marathon is just 8 weeks out. This week I will climb into the upper 50s, but that is still low for me.

But optimizing training is all about experimenting. I've typically done well with very high mileage (in the high 70s) but there have been a few occasions when that has burned me out. And given that I have TWO marathons I'm training for, why not experiment with the first one with some lower mileage?

The thing is. . . mileage is just one piece of the massive training puzzle. Other pieces include the types of workouts, the frequency of workouts, fueling/hydration, stress levels and more. I think it's easy to get hung up on weekly mileage because it's a tangible, measurable thing. And as someone who loves analytics, mileage is definitely something I can get too focused on. 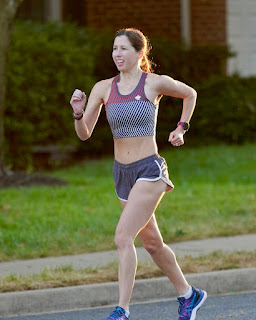 When I ran Boston last spring, I had to take 25 days off for Covid, and then another 9 days off just weeks before the marathon. And when race day came, I felt as fit as ever. I learned that I don't need to be so rigid with my training. I have a coach who is renowned for his approach, knows 100 times more than I do about running, so I am putting it in his hands.

That said, the key to an effective coaching relationship is the communication. It's important for him to receive my feedback on how the runs felt so he can tweak the plan as needed. I am also experienced enough to tweak the plan myself in terms of moving days around.

After years and years of running 70+ miles per week during marathon training, I think I have established a solid endurance base. Endurance has always been my strength, so the ability to work on speed without having super tired legs is worthwhile.

A few key workouts
I'll recap a few of my workouts here so you can get a sense of what training has been like.

17.6. miles, 8:52 pace on September 3. It was warm and humid so I kept it really easy. Although when I got back home, I started to see black spots and my vision was slowly getting more and more black. I lied down on the kitchen floor and felt horrible for a few minutes but then I was fine. While everyone struggles in the humidity, I have found that I am susceptible to heat exhaustion and it's not entirely safe for me to be running this kind of distance in the heat. But I did it and survived. Hydration was a major focus for the rest of the day.

9 x 1000m Cruise Intervals with 200m recovery jogs on September 5. Nine might seem like an awkward number, but Coach Greg prescribed 8-10 so I thought 9 would be a happy medium. I was encouraged by this workout. I was extremely consistent with my paces in the 6:44-6:50 range and everything felt controlled. Given the humidity and short recovery jogs I was surprised I could run at that pace for so long.

Marathon Pace workout: 10 miles at 7:37 pace on September 10.  Greg's company sponsored a local 10-mile race which meant that many of his co-workers were running it. We both signed up for this last spring and my intention was never to race it full out. Due to the humidity, I adjusted my goal pace from my actual target of 7:15-7:25 to 7:20-7:30. This was not smart. I KNOW that I need to adjust more like 30 seconds per mile in the humidity, not just 5! This meant that I ran the first half of the race too quickly and by mile 6 I felt like I was running half marathon pace just to maintain it. And then it felt like a 10K, followed by a final mile up a 120 foot hill that was a death march. So I ended up averaging 7:37, which is probably what I should have targeted initially, and it would have felt much better at the end.

20 miles, 8:27 pace on September 16.  I did my long run on a Friday this week. I have a 10-mile marathon pace workout on Tuesday and looking ahead, Tuesday's weather is the hottest of the week! So I decided to move that marathon pace workout to Monday, but I wanted two full recovery days post 20-miler. So today is a rest day and tomorrow will be an easy day.

This 20-miler did wonders for my confidence. It was cooler and less humid and running a pace of 8:00 towards the end of the run felt like 8:30 a few weeks prior. It's amazing how much weather matters! My average heart rate for this run was 154, and it was also 154 for the 17.6 miler. But this run was further and faster by 25 seconds per mile! So that kind of tells me that maybe 25 seconds per mile is what I need to use in terms of adjusting for the humidity.

Shoes I am loving & not loving
Road Runner Sports gave me a pair of the New Balance SuperComp Trainer in exchange for a review of it on my Instagram. I didn't ask them for this shoe and I had never heard of it. But once I learned about it and wore it on a few runs, it quickly became my new favorite shoe.

I don't like wearing carbon fiber plated shoes in training because I like to save that magic for race day. And this shoe does have a carbon fiber plate. But it's meant to be a training shoe due to its weight. It does feel heavy in the hands but light on the feet. And even though it has an 8mm drop, it's more friendly to my Achilles than the ASICS Nimbus, which has a 13mm drop. This is not at all what I would have expected, but I guess it has to do with how the shoe fits me overall and how it changes my stride. I've worn it for two long runs, including the 20-miler, and it performed like a champ.

As for the ASICS Gel Nimbus, I think I have fallen out of love with that shoe as quickly as I fell in love with it. I really loved the Nimbus Lite for long runs, but when they came out with Version 3, it was too big for my feet. By the time I realized this, it was too late to exchange the shoe for a smaller size. (The downfalls of letting shoes sit in your closet for too long). The regular Nimbus 24 initially felt great but the more I ran in it, the more I realized it was too big as well. I kept stopping during runs to make the laces tighter. Additionally, the arch support in the Nimbus 24 is way too noticeable.

It's possible that the previous versions (Nimbus 23 and Nimbus Lite 2) were simply superior shoes and maybe the upcoming versions will be better. But as for now, I am not nearly the Nimbus fan I once was.

My current rotation is the New Balance SuperComp Trainer for long runs, the Adidas Adios Pro 2 for races, the Brooks Ghost 14 and ASICS Nimbus 24 for easy runs, and the Adidas Adios 4 for speed work.