Things have kicked into high gear since the half marathon two weeks ago. The mileage has increased, the workouts have gotten longer, and the weather has gotten warmer! After a divine 4 days at the end of September with crisp, cool weather, the first half of October has been unseasonably warm and humid, by about 10-15 degrees daily. The marathon is four weeks away and I am just now starting to feel like I might be ready by then! 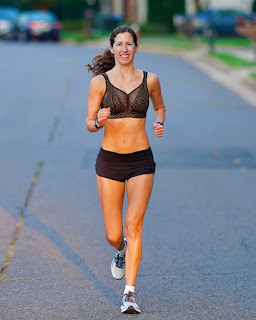 I typically choose a later fall marathon so I don't have to do long runs and long workouts in these conditions. It's not that I can't tough it out- but my body has revolted in the past by getting sick. I've managed to stick with the training, however, by staying super hydrated and running my easy runs very slowly. I have been drinking a packet Liquid IV nearly every day and I have been running my easy runs in the 9:00-9:20 range (as opposed to my usual 8:30-8:45).

I don't train in Carbon Fiber plated shoes unless I am doing my test run in them pre-race, but I have used them twice in the past two weeks to offset the humidity. The boost that I got from them meant that I didn't get completely discouraged with my paces. For example, I was able to run a 5.25-mile tempo run at an average pace of 6:59 in the humidity, which I don't think I would have been able to attain in normal shoes.

Because I've been extending myself to my limit in the humidity, I have avoided hills. This is probably not a smart approach because my marathon is somewhat hilly with about 650 feet of total gain. This isn't to say I only run on flat surfaces (impossible near me), but I always opt for the least amount of hills possible because it's already so much of a struggle to get the run done, let alone with hills. I plan to start running hillier routes over the next four weeks, now that it's supposed to be cooler and less humid.

Running Form
I mentioned at the end of my last blog post that I didn't think my new running form was working out for me. It wasn't making me more efficient and it didn't feel natural. So, after 4 months of spending every single run focused on my stride length and cadence, I threw in the towel. My coach was on board with this. You can't force "ideal form" - it has to come to you naturally. And my form will improve over time with drills, plyometrics, improved balance, and strength training.

On the day I decided I was going to run naturally, I listened to music for the first time since last March! I had been avoiding my headphones because I wanted to be totally dialed into my running and my stride. It was so liberating to zone out a little, enjoy the music and just go with the flow.

And for the first time since coming back from my injury, I felt like my "old self" at my "old pace" - which was faster and more relaxed feeling.

Fueling
I have experimented with multiple fueling strategies, and I honestly feel my best when I incorporate UCAN. I had been trying to switch to 100% Maurten products, but I think you need to take the gels every 30 minutes to avoid a crash. And using the Maurten drink mix doesn't seem to provide enough pep. This could have been part of why I didn't perform as well as I hoped at my marathon last March.

At the Harrisburg Marathon last fall, I had major digestive issues and I blamed the combination of UCAN + too much food pre-race. I think the solution could be a smaller breakfast (English muffin instead of bagel), and drinking a less concentrated UCAN mixture. And probably drinking the UCAN 45 minutes pre-race. UCAN does make a gel now, but I am allergic to one of the ingredients, which is not contained in the energy powder.

I should also keep in mind that I have successfully used UCAN at many marathons and half marathons over the past 5 years and the only time I had an issue was at Harrisburg. 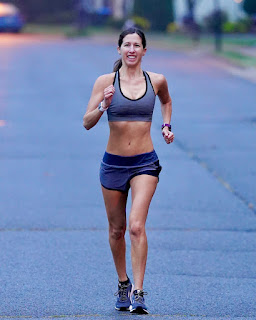 Overall Mindset
I don't know if it's because of the warm weather or because I've spent so much time focused on my stride, but I haven't felt great about my progress this training cycle. My runs have felt ok, for the most part, but have rarely felt really good. Every long run has been a struggle, and the two times I set out for 20 miles I ended up with 19.22 and 19.33. From a training standpoint, that's almost as good as a 20, but the fact that I just couldn't make it to the finish line doesn't bode well for my confidence.

I also need to remind myself to STOP comparing myself to other runners. I often feel like I am the only one who struggles in the humidity. When I scroll through Instagram, it seems like everyone else is running their normal paces and I am the only one who has slowed down. I'll come back from a humid long run feeling totally exhausted and having run a mediocre pace, and then runners who are about my same level will have run father, faster, and felt amazing (in the same conditions). It's definitely NOT helpful to have these thoughts, but I can't help it - I have them and then I have to fight them off.

Maybe once the weather finally cools down I will feel like a whole new person. Four weeks is still a long time in the world of marathon training and I believe I can still gain a good amount of fitness between now and race day. In the past I have had amazing training cycles where I have PR'ed my workouts but then didn't reach my marathon goal. So maybe I'll outperform my expectations. I remain optimistic despite my feelings of "blah" over the past month.