Yesterday morning, I ran my 7th Firecracker 5K. For me, the biggest accomplishment at this race is getting to the start line healthy. I had mono in 2012, 2016, and 2018, and I had a stress reaction in my shin in 2013. I would love for this race to be a tradition, but my health issues have prevented me from running it multiple times in past years.

Staying Healthy
This year, I made a concerted effort to not get sick. That included seeing a "diagnostic specialist" doctor to get to the root cause of my heat sensitivity/immune system issues. It also included dropping my speed work down to just one day a week, and limiting the long run to 90 minutes. Typically, I run 2 speed workouts per week and my long runs are 2 hours, even when not training for a marathon. 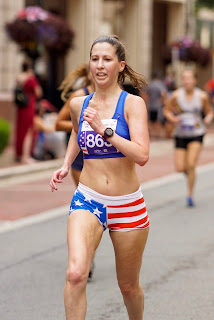 The diagnostic specialist ran a bunch of tests on me and found that I have hypothyroidism. One of the tests also showed that my "Immunoglobin A" was outside of the normal range, which can indicate a sub-par immune system. Finally, two stress tests (blood + saliva) indicated that my cortisol levels are higher in the evening, which could be contributing to me waking up in the middle of the night, which I do almost every night.

So, I am taking supplements to treat all of this, including the hypothyroidism. I've also cut out all caffeine, including chocolate. And, I am drinking only one alcoholic beverage per week.

Finally, we had the benefit of May and June not being ridiculously hot and humid every day, and that has helped. In June, I adjusted my schedule so that the speed work would fall on the coolest morning. As a result, I've never done a speed workout in anything over 70 degrees. Until today.

Race Plan
The Firecracker 5K is known for always being really hot and humid. After all, it falls in the middle of summer! This year, it was in the high 70's, cloudy, with a dew point of 71. That means the humidity was somewhere around 95%. It was very muggy.

My plan for this race was to run it at about 90% effort, as opposed to the 100% I would typically strive to put out. I wanted to run strong, but without killing myself and putting my immune system at risk. A few days before I got sick last summer, I raced a 5K in 66 degree humid weather. I ran it extremely hard at the end because I was fighting for first place female. Afterwards, it took a full 10 minutes to feel somewhat normal again. I had been dizzy, my heart was pounding, and I had definitely over-exerted myself. I didn't want to make that same mistake again.

I decided I would run by effort, and look at the Garmin for informational purposes only! In terms of time, I had run 21:16 in 2017, back when I had three months of 5K-specific workouts under my belt, and I ran at 100% effort. I didn't expect to be anywhere close to that, so I was thinking I would be doing well to squeak under 22:00.

Before the Race
I wasn't at all anxious about this race in terms of running a particular time. I was more anxious about the potential of the race making me sick. Therefore, I hadn't even gotten my typical pre-race breakfast at the grocery store: a bagel with peanut butter. It just totally slipped my mind because it didn't feel like a race! I ended up eating some pretzels with peanut butter instead.

We did a shorter than normal warmup (12 minutes) because it was so warm and humid. We then returned to the car where I stuffed my sports bra with about 10 ice cubes from a cooler. Greg and I also each got an Energice out of the cooler and brought it to the start line. Energice is like those Flavor Ice pops, only it has B vitamins and electrolytes. Normally, I would have this as a post-run treat, but I read somewhere that having a frozen drink right before a race cools your core.

I had never heard of Energice, but they reached out to me asking if I wanted to partner with them on an Instagram campaign and I agreed. They sent me a huge case of it, which I thought I would never use, but now I plan on having one every day. Anyway, the Energice is really tasty and refreshing and was a perfect way to keep my core cool right before the race started.

Mile 1: 6:43
The race started, and I focused on staying relaxed and keeping it easy. The first mile is mostly uphill, and my goal was to run the tangents and to keep the effort steady. Within the first few minutes, I had pulled in front of Greg. I could hear him breathing behind me for a bit, but I pulled away even more until I could no longer hear him.

When I glanced down at my Garmin about four minutes into the race, I could hardly believe my eyes. I had imagined I was running a 7:00 pace, but I was way under that. As I said above, the Garmin was for informational purposes only and the effort only felt moderately hard, so I stuck with it. Usually in 5Ks I go out harder, but this felt one notch down from my usual effort.

Mile 2: 6:27
This mile is mostly downhill, so I maintained my effort and let gravity do its thing. I felt strong the entire time, and while I was working hard, I didn't feel like I was maxing out. When I felt my watch beep for 6:27, I was shocked. In my mind, I had thought this mile would be somewhere around 6:45. I was still ahead of Greg, but I knew the hardest part was yet to come.

Mile 3: 7:02
This mile is hard. There's a huge climb just goes on and on and on. I knew to expect it, and I vowed not to look at my Garmin. This was when the race finally started to feel like 5K race effort. Within one minute, I went from feeling awesome at a moderately hard effort, to fighting hard to "hang in there".

I began to hear Greg coming up behind me, and I knew he would inevitably catch me and pass me. He's stronger up hills than I am, and so when he passed me at 2.8, I decided not to try and follow. It wasn't really a decision, though. I wouldn't have been able to keep up.

Last 0.17: 6:55 pace
As I made the final climb, I stayed strong, but did not push to my max like I typically would at the end of a 5K. I think I probably had another gear, and could have dropped down into the 6:30's and shaved a few extra seconds off my time, but I was satisfied with my effort level at 90% so I just maintained it until I crossed the line.

Official time: 21:27 (or 21:26 if you look at the list version of the results rather than the individual

I should also note that my Garmin credited me with a 21:00 5K. I'm not saying that the course was long, but it's interesting to know what I would have done if I had hit the tangents perfectly.

After the Race
Greg and I waited for our friend Hannah to finish, and then we did a cool down jog for about 10 minutes. After that, I went to go check out the results. Much to my dismay, I was not listed. I went to the results tent, and they said they got me crossing the start line, but not the finish line, so they had to check their back-up records for me. They eventually found me, and added me to the results. I was relieved that they had a back up timer, because it sucks not to get listed in the results!

We stuck around for the awards, and I discovered that I won first place in my age group! I was really surprised because this is a competitive race. So many fast runners show up. If you had told me at the start line that I would be winning my age group, I would never have believed it, based on who was lining up. I placed 16 out of 695 total women.

We then proceeded to brunch with Allison and Hannah, where I devoured an omelette, grits, and a huge coconut pancake.

Final Thoughts
I'm pleasantly surprised with my result-- I certainly did not expect to run this fast. Given my effort level and how it felt, I would have guessed I was running a 7:00 pace the whole time, but according to my Garmin, I averaged a pace of 6:45. I think several things contributed:

I won't be racing again until Labor Day, but I do plan to run a 20K in August as a training run. 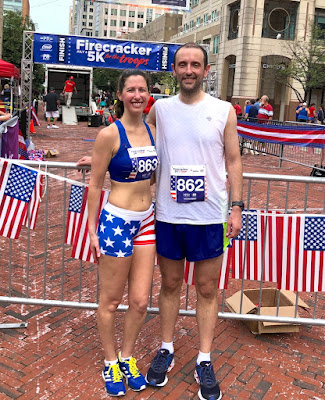