The Logistics of Running

One of the biggest challenges of marathon training is the logistics. How, when, and where do you fit in all the miles? For such a simple sport, the logistics can get pretty complex.

I ran 15+ miles before work on Tuesday, and it required a fair bit of planning. I'll use this run to share how I managed to execute it successfully in terms of being fueled, hydrated, safe, and able to go to work afterwards.

The Workout
This was one of my biggest workouts of the training cycle:

I had done this workout once before, when I was training for Boston last spring. I totally nailed it last time, and I was hoping for the same this week.

Weather
One of the first logistical things to consider was the weather. This workout was originally scheduled for Monday, but we had a severe wind advisory with 30 mph sustained winds and gusts up to 60 mph. Not only was this weather ill-suited for a tempo run, but it was downright unsafe. So I asked my coach if I could swap my Tuesday and Monday runs, and he said yes. I ended up running on a treadmill on Monday for the sake of safety, and moved the run to Tuesday. Tuesday's weather was delightful: 29 degrees with low winds. 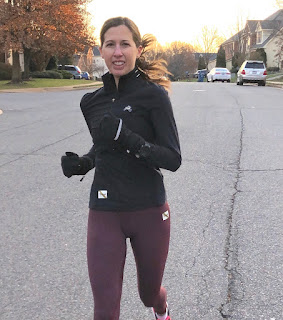 The night before I had selected my outfit. Tights, socks, a sports bra and a half-zip. I actually narrowed it down to 2 half-zips, and made the final determination in the morning based on the actual temperature. I often find that the forecast hourly temperature can change by as much as 5 degrees to the actual, and that is enough to change my wardrobe decision. I decided to wear my adidas Adizero Tempo 8 shoes. I've worn them in half marathons so I knew they had enough cushion to power through something long and fast.

Watch
Please appreciate that all of my headings have started with "W" so far, as this will be the last one. While the 1-mile auto-lap feature on the Garmin would have sufficed for this run, I programmed the intervals into my Garmin the night before the run. That way, I wouldn't have to keep glancing down at my watch during the four-minute recoveries to see when it was time to run hard again. Instead, the watch would beep at me, alerting me that my recovery jog was over. I also made sure to charge the Garmin overnight so it would be ready for the long haul.

Route Planning
There's a neighborhood about 2.5 miles from my house in which I typically do speed work. It's a large neighborhood with lots of interconnecting roads that don't have thru traffic. There are definitely cars (especially as the morning rush hour kicks off) but they are relatively infrequent. Since I don't listen to music, I can always hear them coming from behind me, which makes me move closer to the side of the road. Otherwise, I run straight down the middle of the road without issue.

The neighborhood features gently rolling hills. There are no flat portions but the inclines are (for the most part) very gradual. In fact, I wouldn't even call them hills--they are inclines and declines. I don't think I ever gain more than 30 ft within one mile.

Anyway, because the roads are all interconnected, I determined my exact route the night before so I wouldn't have to make decisions during the run itself. There's a loop I do which includes lots of turns and weaving through the streets that's 5.5 miles. I decided I would run that loop once, and then run a circular loop that's about 1.5 miles for the rest of it. I like to think of it as a 1.5-mile track.

Sunrise and Start Time
I do not like to run speed workouts in the dark. Even with a headlamp, I am fearful that I will step in a pothole or uneven pavement and fall. When I have done speed work with a headlamps, my paces were slower than ideal because I kept such a close watch on my footing, and not stepping confidently. For an easy run, I'm good to go in the dark as long as I have my headlamp. The sun rose at 6:46, which meant it would be light enough to see starting at 6:26. And I didn't mind doing the warm up in the dark, so that meant I could leave the house as early as 6:05 and have enough light. I set my alarm for 5:40, which would give me 25 minutes to get ready. In reality, I woke up naturally at around 5:00.

Fueling
I mixed one serving of Generation UCAN with water in my blender bottle and drank it pretty quickly. Technically, you are supposed to take it 30 minutes before you start exercising, but of course I didn't have time for that, and figured it would be 30 minutes before I started the fast portion. The run ended up being 15.6 miles total, but one serving of UCAN was enough to keep me energized throughout.

Hydration
Because it was only 29 degrees, I knew I could get away with running the entire workout without drinking water, so long as I hydrated well the day before and drank water during the warm up. I filled
a disposable water bottle with piping hot water (so my hands wouldn't get cold holding it) and drank from it periodically throughout the 2.3-mile warm up. And then I tossed it in a garbage can just before starting the tempo miles. If it had been warmer, I would have driven my car to this neighborhood and planted the bottle next to the tire; making sure I was at my car during the recovery jogs. There are really no other hiding spots in this neighborhood to hide a bottle, and I've done this several times on other runs with no issues.

Driving
The point in the neighborhood where I wanted to start my run was over three miles from my house, so I drove to a location that was one mile away from my house, which meant I could run there in just two miles. Greg was also running that morning, so we left together in the car at 6:10, drove one mile together, and then I gave him the key. I knew I would be able to finish 2.5 miles from the house, and I figured that would be a good cool down distance.

Apple Watch
If, for some reason, the workout left me so exhausted that I couldn't run home, I wore my Apple Watch to enable me to call Greg so he could come pick me up. So I had my Garmin on my left wrist, and my Apple watch on my right wrist to use as a telephone if needed. I also told Greg I would call him when I was done with the tempo miles, just so he knew when to expect me back home.

Workout Recap
Having set myself up for a well-lit, well-fueled, safe run, I was excited to get going. Greg and I left the house a little later than planed at 6:10. We drove a mile and parked the car, and I gave him the key. We ran 2.3 miles to the tempo neighborhood at which point he continued on and I stopped briefly to throw away my water bottle.

Then it was time for the work to begin. I remembered how the last time I ran this workout my paces were faster than expected, and I couldn't believe the paces I was seeing on my watch. But that was not the case this time. My coach wanted me to average a 7:00 pace for the first 4 miles, and that was not easy. I felt like I was exerting around a 6:50 effort, and yet my splits were 7:03, 7:01, 7:02, 6:55. So, I got the job done on the first four miles, but they were harder than expected. 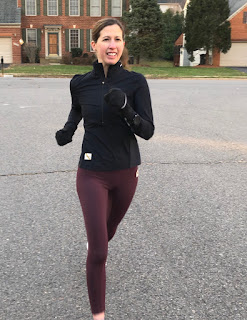 Of course my mind automatically went to "OMG, how am I going to run 6 more miles faster than that?!" but I quickly shifted away from that line of thinking. I know from experience that it's never a good idea to project negatively onto what might happen later in the workout or race. It's always best to focus on the mile or interval I'm in currently and getting through that.

The next three miles were prescribed at a pace of around 6:50. That seemed daunting so I told myself to just run by effort, which I did. It was hard. My legs did not have much pep and my energy level was so-so. I was now running the "1.5-mile track" loop of the neighborhood and I couldn't decide if that was mentally easier or tougher than running the route with all the curves. Splits were 7:04, 6:58, 7:03.

With only 3 tempo miles to go, things got easier from a mental standpoint. Although physically I was starting to feel really beat up. I desperately wanted to stay in the 7:00 range, and worked my butt off to hit 6:59 for the first mile, but then was really wasted in the second mile, running 7:11.

At this point (during the 4-minute recovery jog) I decided I was going to be content with how the workout was going and I would run that last mile hard, and not care about the pace. The last mile was 6:56, which (looking at my Garmin data) started out at like 7:20 and then progressed down to 6:35 at the end! Once I was nearing the end of that mile, I told myself to truly "empty the tank" so I really rallied.

I was SO HAPPY to be done with that workout! Now I just had to run home. I was about 2.5 miles away from my house so I started the slow jog back. I called Greg on the way back to let him know I had finished and that I didn't need him to come get me. I ended up running 2.1 miles for my cool down and walked the rest of the way home, which was actually a nice change for my legs. All in all, I ran 15.6 miles!

Recovery
As soon as I got home, I popped open a Naked Protein smoothie. These juices have 30 grams of protein and 420 calories. It's a great way to refuel after a long run when you're short on time. I downed the whole thing in less than 3 minutes.

Of course all I wanted to do was take an Epsom salt bath and crawl back into bed for a nap, but work awaited me! I did my hip exercises because I cannot afford to slack there, followed by a quick shower, no hair washing. I got dressed for work, put on my make up and was out the door by 9:15. Technically I was a little late to work but I didn't have any early meetings (on purpose) so it was okay.

Workout Analysis
While I would have loved to hit the pace targets that my coach prescribed, I was still happy with this workout. When I did this workout last spring I was faster, but I also wasn't in the midst of an 80-mile week. Plus, I had run on a treadmill the day before and that always makes my legs extra tired for the next run.  The tempo miles averaged out to 7:01, so running 10 miles at that pace is really strong. I think my endurance is really solid right now because I was able to maintain my pace even when I didn't have a ton of energy or leg power.

Most of all, I am happy that I stuck with it. Even though I wasn't running as quickly as I would have liked, I didn't get discouraged or throw in the towel. I focused my effort level and staying mentally strong. After all, workouts aren't about setting PRs and proving fitness - they are about making fitness gains.