I'm very passionate about the topic of sports bras. As a size 30-32D, it's difficult to find a supportive, comfortable sports bra.

When I was in high school, my dance team coach informed me that my bouncing boobs were a distraction for the entire performance. "Nobody is watching the dance because they are all looking at your chest bouncing around," she said. "You need to get a more supportive sports bra before our next performance." Needless to say, she wasn't the nicest or most sensitive coach in the world.

Thus began my life-long quest for the perfect sports bra. My mom and I found one that worked quite well in terms of support, although it wasn't all that comfortable. And it was over twice the price of the one I had been wearing. But if it meant that my breasts wouldn't be the focus of the next dance team performance, (at least in my coach's mind) it was a necessity. 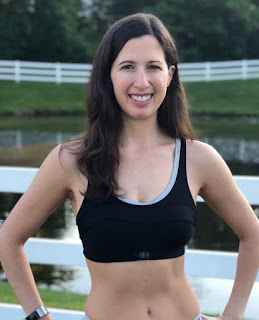 I learned that most sports bras came in small, medium, and large sizes, which roughly equated to 32A, 34B, and 36C. There was little thought given to women who didn't fit these sizes.

What I Want in a Sports Bra
The perfect sports bra, which does not seem to exist, meets all of the following criteria:


Bonus points if the bra is stylish, comes in a variety of colors, and looks good under a tank top. I have yet to find a sports bra that meets ALL of these criteria. My favorite sports bras come close, but nothing is truly ideal.


American vs. European Sports Bras
In the United States, it's difficult to find a D-cup sports bra that meets the first three criteria. Most all sports bras that support a larger breast are bulky, have underwires, and/or chafe. I tried on multiple Lululemon bras but didn't buy any of them. The ones that were designed for a D cup, like the "Speed Up" bra were too bulky. And the other ones were not supportive enough. Brooks and Under Armour both offer multiple options for D cup sizes, but I've found them to chafe, even with massive amounts of Body Glide. Most sports bras you find in the US are XS, S, M, L, XL which, as I said above, correlate roughly to 32A-38DD. It's like they assume that as your breasts get bigger, so does your width around, which we all know is not true.

When I first started running, I realized that I had to choose between a bulky underwire D-cup bra or cramming my breasts into an XS standard sports bra for compression. The underwire options were so uncomfortable that I typically opted for bras that were way too small for my breasts, but supported me nonetheless.

Then, in 2008, my sports bra world changed. I ran the London marathon which meant visiting the London Marathon Expo. In Europe, they treat sports bras the same way Americans treat shoes. They acknowledge that you need to be professionally fitted and they research and develop supportive technologies. The London expo had multiple booths solely dedicated to sports bras. There, I learned that my compression technique was really unhealthy for breast health. I also learned that you don't want to stop the bounce completely, you simply want to support it. Your breasts need to have enough room to move around freely, but the bra should incorporate features to support that movement.

I left the expo with three different sports bras-- all of which were above my budget, but something I never regretted for a minute. They were the Thuasne Force 3 (pictured above), the Shock Absorber B4490, and the ZSport. For the next 3 years I continued to buy those bras online until they were finally discontinued. Somewhere around 2014, I realized that those bras were breaking down and I needed new ones. At this point, I discovered two new favorites: The Berlei Sport Fit Crop Top and the Athleta Hulabraloo. Berlei is a European brand, and I was surprised that Athleta was able to design a bra that worked so well for me. Note: Athleta is great for D-cup swimwear, too!

D-Cup Sports Bra Reviews
This summer, I am once again on the quest for the perfect sports bra. Here are my reviews of the bras I have tried so far. Note: I have not received anything for free or for discount in exchange for these reviews. As I mentioned above, I am passionate about this topic so I am writing about it.

The Athleta Hulabraloo
Rating 9/10
It looks like this bra is being discontinued, but there are still a few left online. This bra tops my list as the best sports bra I have ever owned. I have 8 of them. It's not perfect, but pretty darn close. There's no underwire and no bulk. It's very lightly padded just for additional coverage, which I don't mind. This bra has never chafed me, even on 20-mile sweaty long runs. It's very comfortable and supportive and the racerback style makes it look good under tanks.

The only thing keeping this bra from earning a 10 out of 10 is that it's not totally flattering. It's not un-flattering, but I think because it's so low cut and then has some extra material on the bottom, it makes my breasts look lower on my body than I would like. The bra does not have adjustable straps. If it did, I think I could raise the boobs up a bit and get the look I wanted.  Here are some photos of the Hulabraloo in Action, size 32D: 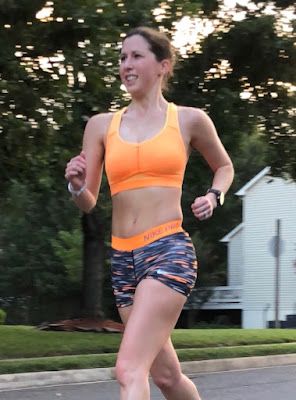 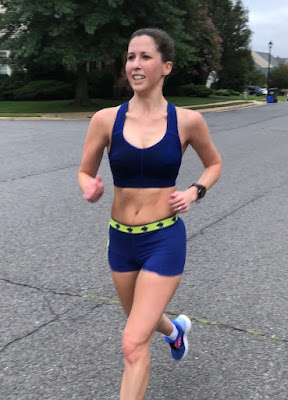 The Anita Active Maximum Support Wire Free Sports Bra (model 5527)
Rating: 7/10
I like this bra quite a bit. It has no underwire, it's very supportive and comfortable, and it has an extremely slim profile with no padding. This bra also comes in multiple color options. However, it might not look great under a tank top because it's a classic bra style and not a racerback. The straps are adjustable which means I can make the breasts look higher on my torso. This bra keeps the breasts separate from one another, whereas many sports bras push them together. This is a good feature!

The bra does not chafe when used with 2Toms Sport Shield, but with Body Glide it does chafe. Anita bras can be bought online at HerRoom.com. They are fairly pricey (about $70 each) but HerRoom often has sales on particular colors. If the material were smoother, I would have given this bra 8/10, but it's a little coarse. It does not look like this bra is being discontinued any time soon, so get it while you can! 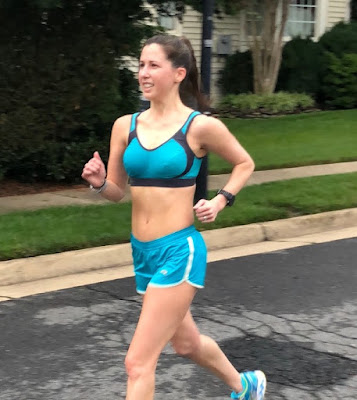 I also bought the Anita Active Air Control Sports bra (model 5533) This bra is very similar to the one above, only it has some light padding. I like both bras about the same. Once I have run in them more I might have a different opinion, but for now, I can't tell much of a difference in comfort, fit or style. Here is a photo of the Active Air Control Sports bra (size 32D), which retails for $74: 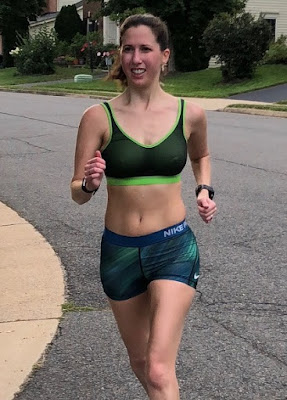 I also have the Active Air Control Sports bra model 5544, which is almost identical to the one above, but the band is wider and the cups are slightly more molded. I don't have a preference among any of these three Anita bras. I like how these sports bras come in multiple colors and support without underwire or a ton of bulk. I'm often jealous of the women who can wear the cute and colorful sports bras while the ones I like are typically limited to just a few plain colors. I highly recommend Anita, just watch out for the chafing and use 2Toms instead of Body Glide.


Nike Impact Strappy
Rating: 6/10
Even though this bra is sold in sizes XS-XL, it looked like it might work for me, given the adjustable straps and the coverage. My favorite thing about this bra is its looks. It has a slim profile with just a little bit of padding. It's stylish and the adjustable straps are great for getting just the right fit. This looks like a traditional sports bra with a strappy back, not some over-engineered device for a busty woman. And it comes in 5 different colors.

The reason I am only rating it a 6 out of 10 is that it's only somewhat comfortable. It's supportive, but just the way it sits makes me notice the bra while I run. Ideally, you wouldn't notice a sports bra was even there while running. It also chafed me a little bit even though I was using 2Toms. I would recommend this bra for shorter, non-sweaty runs. This bra retails for $55. I'm wearing a size Small: 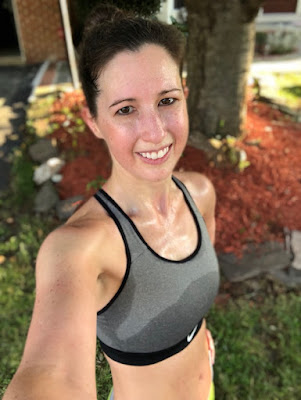 Shock Absorber Ultimate Fly Sports Bra
Rating: 9/10
I'm no stranger to the Shock Absorber brand. It's a European brand that I discovered at the London Marathon expo. For years, I wore their B4490 model because it was supportive and fit really well. However, it was a chafing nightmare. I used to always run with a heart rate monitor, which stood between the bra and my skin, and that actually prevented the chafing. But without the heart rate monitor, the B4490 was a no-go. They also have an Ultimate Run Bra, but I tried that on at an expo once and didn't like the way it fit.

A few weeks ago, I stumbled upon the Ultimate Fly Sports Bra and decided to try it. I love it! It has a fun design with a bright back and a grey front. Some of the color can even be seen under the grey overlay in front. There's no padding and it has adjustable straps. It will look great under tank tops because of the thin straps and racerback style.

When I ran, I loved how light the bra felt. It was like I was running "free" without a huge device on me. The only thing stopping this bra from being the ideal 10/10 is the chafing. It did not chafe me on a 6-mile run with 2Toms Sports shield, but the material looks and feels like it would probably chafe with just Body Glide, or potentially on a longer run even with 2Toms. I'll need to try it on a longer run to confirm, and if it does chafe me with 2Toms, that would be a deal breaker. It's sleeker, more stylish and more flattering than the Athleta Hulabraloo, but if it ends up chafing me on long runs, that won't be good. Here's the 32D Ultimate Fly Sports Bra in action: 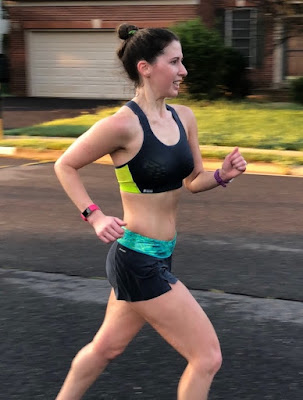 Under Armour Balance Eclipse High Bra
Rating: 5/10
I ordered this bra online and when it arrived, I was surprised at how bulky it was. It has molded cups which make the bra heavy with a lot of material. The material is smooth and the bra is supportive, however there was a little bit of chafing with Body Glide. I have not tried this bra with 2Toms yet. It's not uncomfortable, but it's also not comfortable. In the future, I will probably use it for easy runs only. The bra is available in cup sizes and has adjustable straps, so here is the 32D: 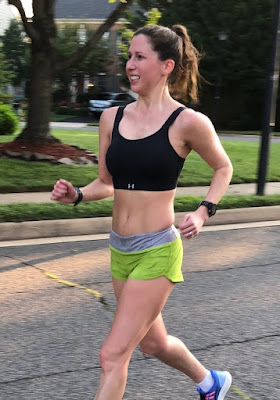 Here is a list of the bras that I tried on but did not purchase:


In closing, if you wear a size 30D or 32D bra, I highly recommend the soon-to-be discontinued Athleta Hulabraloo, the Anita wireless bras, and the Shock Absorber Ultimate Fly Bra. In the meantime, I will continue to be on the quest for a bra that's as smooth and as non-chafing as my discontinued Berlei, as supportive as the Hulabraloo, in as many colors as the Anita bras, and as flattering and weightless as the Ultimate Fly Bra.