Written on Saturday, September 9th
This morning I woke up prepared to run my scheduled 18-mile training run. I looked at my weather app to confirm that yes, the weather was in fact nearly perfect for running. And tomorrow morning was forecast to be even cooler. I then looked at next weekend, when I'm scheduled to run the Navy-Air Force half marathon. Even though it was eight days out and not to be trusted, it was forecast to be warm and humid. UGH.

When I registered for the Navy Air-Force race I knew there would be a good chance of it being warm and humid as it's in the middle of September. But I also thought I would be acclimated. However, over the past two weeks I think I have lost a fair amount of my heat acclimation. It's been in the 50's or low 60's most mornings, with low humidity. This has been a nice treat, but it's not great for staying acclimated to warmer weather.

I started to wonder if it would be possible for me to run my half tomorrow instead of next Sunday. It wasn't long before I realized that the local Parks Half Marathon was scheduled to run tomorrow, with a 6:45 start time. I'd heard great things about this race over the years but I had never done it because it fell so early in the season. It turned out they still had a "handful" of bibs left, but I would need to go to the packet pickup (a 40-minute drive) to register in person.

I emailed my coach (who's on Pacific time) and decided I would run 30 minutes easy this morning and await his reply. If he told me no, I would do the 18 tomorrow. If he told me yes, I would do the half. He texted me and essentially told me it was up to me. The obvious benefit of waiting until next weekend was that he had planned a taper, with easy running only from Wednesday-Saturday, so my legs would be fresh and ready to race.

As it was, I had just run 10 x 1000m at on the track on Thursday, so my legs would likely still be fatigued from that effort. I ran the the workout at my current 10K PR pace (6:44) for an entire 10K, but with 200m recoveries in between. Sounds like a grueling workout, but it didn't really get hard until the last 3 intervals, and I was able to speed up during those. This leads me to believe I am probably in better shape than when I ran that 10K PR.

We went back and forth and he told me to choose the option that would give me the biggest mental boost. If I were to run the half tomorrow, I would have to realize that my legs will not be 100% and I shouldn't expect a particularly fast time, but rather focus on running a hard effort.

This was such a tough decision. I had also previously consulted Greg, Rochelle, and Hannah. Greg told me to go for it if I wanted, but he was sticking with our original plan. Rochelle said she typically favors sticking to the plan, but low 50's with a 6:45am start was pretty attractive. If I did it, I would just have to realize that my legs would be tired. Hannah advised me to stick to the plan because the potentially humid run would make me stronger. She also reminded me that the marathon was what was most important, and my plan was designed to optimize for that.

Lots of opinions, but after going back and forth with my coach, I gained some clarity. Finally, it all solidified in my mind. I could either run a half on tired legs in pleasant racing conditions, or have rested legs in potentially warm/humid conditions. I chose tired legs. I've had a lot of success running hard workouts on tired legs, but that exhausted feeling I get from warm/humid running really takes it out of me and has been demoralizing in the past. For example, I PR'ed my 10K last February without having tapered, and that was a hilly course. The Parks Half Marathon should be relatively flat, with an overall (slight) elevation loss, as the course is point-to-point. So I think as long as I go into the race tomorrow with eyes wide open, realizing that my legs might me screaming at me and I might not be as fast as I would like, then it's all good. I'd prefer that over a warm race. This isn't to say I couldn't run well in a warm half, I just historically haven't done so.

But if the weather for the original Navy-Air Force half turns out to be cool, THEN I will be kicking myself! Ha. It's a gamble, really, but one I've become comfortable with ever since I picked up my bib.

I decided to write this portion of the blog now, so that my actual race experience doesn't influence my description of my original mindset. Until tomorrow!

Written today, September 10th, at 4:30am
While I thought I was confident in my decision, my sleep indicated otherwise. I lay awake most of the night, simply not able to fall asleep. I wasn't consciously worried about the race, but I must have subconsciously been. I haven't had sleep issues the night before a race in a long time. I tried not to judge myself for not being able to sleep and I tried not to think about how it would impact the race. I'd say I was about 85% successful. All in all, I would guess I got about 3 hours of sleep. Two of them from 1:30 to 3:30, and the other one at various intervals from 9:00-11:00.

It's not too late to change my mind, but I'm still going to go for it.

Written today after the race
Okay, I will fully admit that that was not the world's greatest idea! But I made the best of it and I learned the value of sticking with a plan, as my friends encouraged me to do.

We drove 40 minutes to the race site, found parking pretty easily and I began my warm up. I ran a 1-mile warmup and everything felt pretty good. My strategy was to start at a pace of around 7:10 for the first few miles, and then take it from there.

Miles 1-5
The first thing I noticed: this race was, in fact, hilly. The elevation profile made the course appear flat because of the scale and I was not prepared for a rolling course with my tired legs. I came upon the first major hill at the end of mile two and even at that early point in the race, my legs had very little to give. By the time I got to mile 5, I realized that I likely wouldn't be speeding up, but I felt like I could maintain what I was doing for awhile.

The entire course is run through parks, which meant 100% shade, but also an inability to pace with the Garmin. My splits were all over the place. I decided to start manually splitting at one point, but then I missed some mile markers, so that didn't work out either. I think I stayed at my 7:10 for the good part of these miles, so let's go with that.

Miles 6-10
I made a concerted effort to be mindful of my surroundings, to take in the scenery, and enjoy the fresh air. Weather conditions were truly ideal, and I was running in a beautiful park-- which is a huge reason why I wanted to do this race to begin with. I wanted to have an enjoyable race experience, and this race certainly delivered on that.

I was beginning to tire, but stayed strong regardless. I knew my pace was slipping but I didn't mind. The important thing was the effort. But then the 1:35 pace group passed me during the 9th mile. I had been running on the park path in pleasant solitude when I heard a group of footsteps gradually approach from behind. I knew they must be the 1:35 pace group and I tried to stay ahead of them for as long as possible, which only ended up being about a quarter of a mile. And then they all passed me one-by-one, which was definitely a mental blow. No longer could I ignore the fact that I was slowing down. But I pressed on. And then came another massive hill. They even had a name for it: high-five hill, I think. A bunch of people were out with big white hands that we were supposed to high-five. It took all the energy I had to power up the hill that I couldn't spare any to high five.

When I got to the aid station at mile marker 10, I stopped and regrouped. I suddenly realized how horrible I felt and the volunteers repeatedly asked me if I needed help. I instantly thought I should borrow someone's phone and call Greg and just shut it down. What would be the point of finishing when I was feeling so awful? But then I reminded myself that I wanted the practice of pushing through when things got tough, not giving up. So I made a comprise and decided to view this race as a 10-mile hard effort with a 3.1-mile cool down. 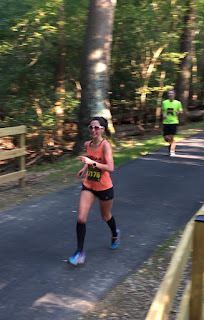 My only goal was to get to the finish time, and I will admit that I took a few short walk breaks on the hills. Loads of people were passing me, including the 1:40 pace group during the 12th mile. I tried my best to not focus on the other runners and remember that this was not my goal race but the end of a long, hard workout. And believe it or not, I was still having fun and enjoying the course.

I'm not sure what my pace was during this stretch, but I think it was probably around 8:20. And I got a little zippier during the last mile knowing it was almost over. I was elated to see Greg snapping photos of me at the end of mile 13. I made it back to him without having to call him! Small victories.

My finish time was a respectable 1:41:33, and I was really proud that I didn't give up. Especially since this race has amazing swag. We got a medal, a hat, and this bright orange towel thing that made a great nose wipe just when I needed it!

After the Race: Final Thoughts
This race was simultaneously enjoyable and painful. Even though I believe myself to be in PR shape, running isn't always about that. Sometimes it's just about getting out there and putting out a solid effort. And sometimes it's about savoring an experience. So even if I blew my shot at a PR next weekend, I'm okay with that because I got something different.

That said, if I knew how this race would play out, I would have opted for the easy 18 yesterday and the half next weekend. But hindsight is 20/20. I think I would have had a much better day if I had slept even semi-normally. I conquered my sleep demons several years ago, but I'm not perfect.

Greg put the race in perspective for me: "It's not like you did anything bad. You ran a half marathon because you wanted to." True. I wanted to run this race, and so I did.

My legs are pretty beat up right now, so I'm going to focus on foam rolling, massage, healthy eating, and hopefully sleep. I think that today was a great training stimulus for the marathon (both mentally and physically) and I'm anxious to get back into the groove of training. Total weekly mileage: 60.7. 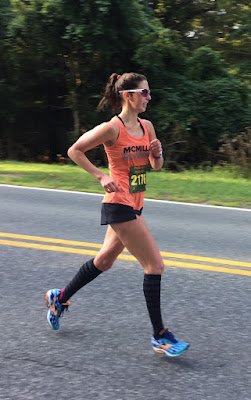