With only six weeks until the Myrtle Beach marathon, this training cycle has gone by very quickly! But then again, I've really only been training for five weeks-- I got a late start due to my conservative 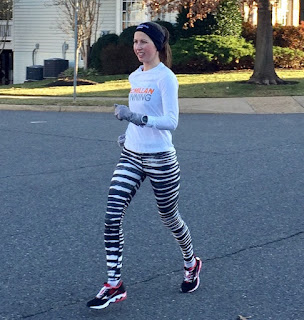 comeback from mono. I spent October and November rebuilding my fitness and getting back into the groove of training, and I didn't actually start marathon training until halfway through December.

My mileage has increased quickly-- probably quicker than most would advise. However, given that I averaged 60-65 miles a week last spring when I was training for Boston, my body is no stranger to this kind of work. Thankfully, I've adjusted quite well and I find that my workouts are energized and my legs have enough "pep" in them to run at the prescribed effort levels. I continue to work with my McMillan Running coach, who has once again pushed me to a new level. My last rest day was January 6th (the day before the Disney Half marathon that was cancelled) so I've now been running for 16 days straight, averaging 9.6 miles per day.

Monday: 8.6 miles easy at 8:43 average. We were still in Disney World, so I ran back and forth on a 3/4-mile service road. It did get boring after awhile, but it was more scenic that the neighborhoods I traditionally run in.

Thursday: 8.1 miles easy at 8:37 average. My original plan called for road intervals on Thursday, but I ended up changing my schedule around. Because it was supposed to snow on Saturday with roads potentially icy through Sunday, I decided I would do my long run on Friday morning. That meant sacrificing the road intervals (not wanting to run a long run the day after intervals), with the potential of doing those on Sunday if the roads were safe. It might have been fine to do the intervals followed by the long run, but the long run was actually a hard workout, not a typical "long slow run" at an easy pace.

Friday: 60 minutes easy, 60 minutes hard. This served as my long run for the week. I ran the first hour at a pace of 8:41, and the second hour at a pace of 7:34. The resulted in a total distance of 14.84 miles at an average pace of 8:05. I liked this workout a lot. Running the second half harder made it go by quickly and it was good practice for running hard on tired legs.

Saturday: 3.4 miles easy at 8:46. The weather ended up not being nearly as bad as predicted, so I was able to run outside later in the day.

Sunday: 12 times (1 minute hard, 1 minutes easy) + 12 times (30 seconds hard, 30 seconds easy). These were the road intervals originally scheduled for Thursday. While the forecast had called for freezing rain a few days prior, Sunday ended up being a beautiful day for running. Most of my splits for this run were at a sub-6:00 pace. And when I did the math, I realized that I ran just over 3 miles at an average pace of just below 6:00. Wow! This run was really hard, with most of the 1-minute intervals between 5:45-6:10, and the 30-second intervals between 5:30-6:00. Including warmup and cool down, I ran 8.5 miles total.

Monday: 8.1 miles easy at 8:40. I actually broke out my heart rate monitor for this, which I haven't been wearing much since my mono comeback. I was pleasantly surprised to see that my average heart
rate was 145. This is at the low end of my aerobic zone, which means I could have been going faster and still have been running at an "easy" aerobic effort.

Thursday: 15 miles, including 12 at "marathon pace" of 7:31. This workout was definitely the highlight of my week. Given that I have a full-time job and had to be at work on time, I started this one super early.  I drove my car to a nearby neighborhood that's relatively flat and doesn't have a ton of cars or intersections to cross. There's a loop of about 5.5 miles which I ran twice (and then some). I ran this same route last spring when I was training for Boston. However, that workout only called for 10 miles at marathon pace, not 90 minutes.

I was pleasantly surprised at how fluid I felt and how relatively easy this was. I didn't feel strained and it only got hard during the last two miles to which I reacted by just pushing harder! Am I convinced that I can actually run a 7:31 marathon pace? I think it's possible if the weather was just right and I was having a good day. I was blessed with perfect weather for this run.

Friday: 6.7 miles easy at 8:53. I intentionally kept this one at recovery pace given the workout I had
the day before. My legs surprisingly felt great! No lingering soreness.

Saturday: 18 miles easy at 8:29. Greg drove us to the W&OD trail and he ran the first six miles with me, and then turned around. I continued to run home from there, which ended up being exactly 18 miles. I kept waiting for this run to get really hard but it never did. Particularly since I was only 2 days out from the marathon pace run. I practiced my race day fueling by having a packet of UCAN before hand and a homemade UCAN gel 80 minutes into the run. I was really pleased with how I executed this run and that my body seemed to tolerate it well. My legs weren't screaming at me and I didn't feel overly fatigued afterwards.

Sunday: 3.4 miles recovery at 8:49. Everything continued to feel good.

We've been extremely lucky with the weather. No major storms leaving ice on the ground, and the temperatures have been abnormally mild. Normally at this time of year, I'm wearing tights and a heavy top with a hat. But instead I've been wearing shorts, skirts, and lightweight tops! Even short sleeves! We have another mild week on tap, and I hope that we don't get any major storms that would derail my training in February. I'm extremely thankful that my training has gone so well and that I'm healthy. 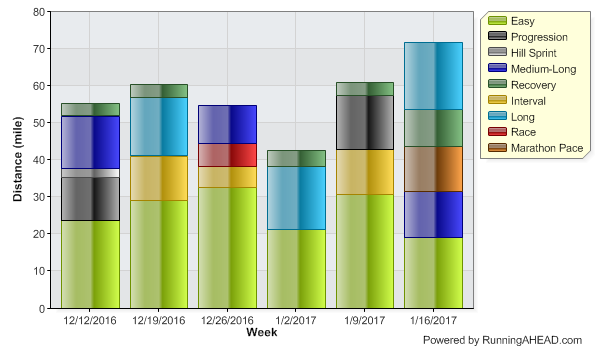