Apologies for the spoiler in the headline, but I destroyed my goal for today's 5K race.

After 12 weeks of no running, no cross training, and virtually no physical activity, I finally resumed running 7 weeks ago. The first four weeks of training were boring, with no speed work except for 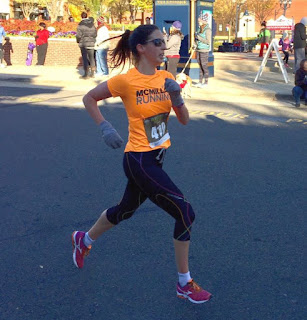 some strides at the end of my easy runs. The next three weeks incorporated some speed work, but nothing super intense. I was frustrated that I didn't have any sense of how fit I was and what to expect from this 5K, but I was also excited to run it and then have a baseline for my workouts moving forward.

I chose this Veteran's Day 5K race because it's one of the "ranked" races by RunWashington. Last year, I was ranked 6th in my age group and to qualify for the rankings, you have to run 6 races from their list. I only had 3 for the year, so I decided I would run this race, a Turkey Trot and another 5K in December. When I started to run again, I figured I would be happy to break 23:00 on this course. It's one of the more challenging 5K courses in the area and my Garmin always logs 3.18 miles, versus other 5Ks which my Garmin thinks are shorter. As I started getting back into the swing of things, I determined that I wanted to break 22:30, with an average "Garmin pace" of sub-7:10.

In preparation for this race, I looked at my splits from the Run Your Heart out 5K, which I ran last February on the same course. They were: 6:39, 6:47, 7:05 and a 6:36 pace for the last 0.17. This yielded a 21:40. I thought this was a well executed race given that the first mile is almost entirely downhill and the last mile is almost entirely uphill. So, I concocted a pacing strategy of 6:50, 7:05, 7:20 for this morning's race, which I thought was appropriate for my fitness level.

Before the race
I slept pretty well last night and the night before so I went into this race feeling energized. 45 minutes before the race, I drank my UCAN and felt ready to go. The weather was perfect: low 30's and sunny. I warmed up for 2.5 miles and I could feel my lungs burning from the cold air. I wondered how they would feel when I was actually pushing, but I didn't think about it too much. After I warmed up, I
went to the bathroom for a final time and I passed my jacket off to Greg. My father and stepmother had also come out to cheer for me, which was really nice!

Even though it was only 32 degrees, it felt warm at the start line in the sun. I chatted with my friend Lisa, who had just run the Indianapolis Monumental marathon last weekend. I was super impressed that she was able to race a 5K so soon after a marathon! I noticed that my friend ReBecca was also there, who I had met after having run the Boston Marathon.

Mile 1: 6:45
The race started, and the first mile felt relatively easy. The downhill is fairly significant and I ran 5 second faster than planned, which I didn't worry about because the race felt effortless. During this mile, my friend Rochelle (who is an elite runner) joined in beside me for encouragement. I had told her my race strategy in advance, and that I didn't need pacing help per se, but that I would be grateful to have her alongside me when the race got tough. Lisa and ReBecca both passed me during this mile, and I figured I would not see them again until after the race.

Mile 2: 6:49
I didn't look at my Garmin too much during this mile, which was probably a good thing. I had "planned" it to be a 7:05 and if I had seen my actual pace I might have made myself slow down. But instead I just focused on keeping the effort level hard. Rochelle knows this course really well, and even though I knew it too, it was good to have her remind me of when the hills were so I could focus on the process of running, and not on the pain. This mile is net flat, but it actually starts off with a large uphill, followed by a down. I typically run downhills very quickly and I'm slower on the ups. So when this downhill came, I surged and passed ReBecca. Lisa was coming closer into view as well. When my Garmin beeped 6:49 I could hardly believe it, but I contained my excitement and focused on pushing hard.

Mile 3: 6:51
My coach had told me that when this mile came, I was supposed to repeat something rhythmic in my head and tell myself that it would only last 7 minutes. I ran past my family cheering squad about
halfway through this mile and that totally pumped me up. Rochelle yelled out "go zebra" and that made me smile. The final hill hurt, but having Rochelle talk to me made me focus less on the pain and more on the effort. ReBecca passed me initially, but then I passed her again. Rochelle peeled off the course shortly before the end of that mile and it was up to me alone to bring it home.

Last 0.18: 6:02 pace
I came upon Lisa right before mile marker 3 and she was surprised to see me. I had told her I was hoping to average a 7:05 pace, and clearly I was way ahead of that. I started to pass her and she surged, which motivated me to surge as well. Ultimately, she finished 4 seconds ahead of me, winning our age group, but it was great that we both finished in the same ballpark to be able to push each other to our best!

After the race, Lisa, ReBecca, and Rochelle and I cooled down together. We accidentally took a wrong turn and the cool down ended up being close to two miles! I ended up having to walk with Rochelle back to the race while ReBecca ran to get her car, drove to us, and took us back-- just in time for awards.

I was the 6th overall female finisher and 2nd in my age group.

This result was totally unexpected on a number of levels:


I'm excited to have a baseline for future workouts and races, and it's also great to see my fitness come back so quickly. There was a time when I was worried that I'd never be as fit/fast as I used to be, and now I think I will be, if not even faster at some point.

It was also great to spend the morning with Rochelle, Lisa and ReBecca. My friend Chad was also there, and my family came out to support me. After the race, my dad and step mom took Greg and me to a birthday breakfast. I could not have asked for a better morning. 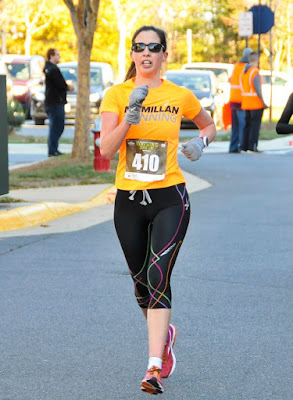