Barriers to Boston: 4 Ways to Cope 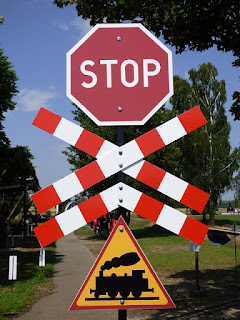 As runners strived to qualify for Boston 2017 within just days of the qualifying window closing, two rather frustrating marathon mishaps occurred. On Sunday, August 28, runners were taken on a nearly 1-mile detour during the Santa Rosa marathon. At the Lehigh Valley Health Network Via Marathon in PA on September 11, runners were "derailed" by as much as 10 minutes due to a slow train crossing.

In both cases, runners who had trained to qualify for Boston missed their times due to circumstances beyond their control. The B.A.A. is not accepting adjusted times because they need to be able to maintain consistent standards, and there is no way to know who would or would not have qualified if the detour or train stop didn't happen.

My reaction to these incidents four years ago would have been something dramatic like "That's so unfair! How devastating! Those runners must be so upset!" And while I still see these incidents as unfortunate, I realize that shit happens, and if you run a lot of races, you are bound to experience something of this nature. Ideally it's not during your last-minute Boston attempt, but it shouldn't be all that surprising that mistakes happen occasionally.

I've personally experienced both of these situations. In terms of the detour, I ran the Love Rox Half Marathon a few years ago and the leader took a wrong turn which added at least an extra half mile for those in the front of the pack. Not only did it add distance, but we actually had to run all the way up a staircase, and then back down it, which was not part of the course. There was actually a different staircase that was part of the course, but due to the detour, we ran an extra set. I was new to mental toughness and I initially let this really bother me, but as the race progressed and obstacles continued to pop up, I started taking them in stride and just focusing on getting to the finish line as quickly as possible.

In terms of having to come to a complete stop, there was a bomb scare during the Marine Corps Marathon 10K a few years back.  Runners at the front of the pack had to stop for 10 minutes. I
stopped for about 2-3 minutes. I was actually in the process of making a comeback from mono at the time, so I wasn't really focused on my finish time, but I think I would have been pretty upset if I was hoping to set a PR that day.

One of the benefits of being an experienced runner is that you're no stranger to mishaps on the course and you learn to deal with them. In light of these, here are my recommendations for how to handle these situation during the race, and how to cope with them after they've sabotaged your race goal.

1. Ignore what doesn't matter. When racing, your focus should be on getting the finish line as quickly as possible. When unforeseen obstacles arise, make an immediate determination if they are something you need to pay attention to. For example, if you see ice on the course, you will need to pay attention to that by adjusting your footing or making sure you dodge the ice. If it starts pouring down rain, you may not like it, but there's not much you can do about it, so the trick is to ignore it and keep running. So when the unexpected happens in your next race, quickly determine if you have to make an adjustment, and if not, ignore it. Don't let it take any of your mental energy away.

2. Stay emotion-neutral. If the obstacle is big enough, like the two examples in recent marathons, you will realize that your time goal will be impacted. Tuck those emotions aside and save them for later. It's okay to be disappointed that you missed your goal, but don't let it become a self-fulfilling prophecy. You still want to run your best possible time in spite of the obstacle. When I was running Love Rox, I realized that a PR wouldn't be happening fairly early in the race. My initial reaction was to give up, but then I snapped into a tougher version of myself and set those emotions aside and continued to push really hard. Mentally strong athletes continue to work hard and do their best even when they know they aren't going to achieve their original time goal.

3. Find satisfaction in your performance. While you may be bummed that an injustice was done to you, you can still walk away with a worthwhile experience and a performance you are proud of. Instead of focusing on the fact that you missed your goal (something you couldn't control) focus on the things that you could control, and that you did a good job of. It's not easy to mentally pull yourself back together after having to come to a complete stop. But if you are able to do that, that's a huge win, and something that you can pull on in future races. I'm really glad I had my Love Rox experience because now when a race throws something at me, I know I can deal with it.

4. Let go and move on quickly. The sooner you accept that you didn't make your goal, the sooner you will have more mental energy to focus on the next race. It's not productive to continue to feel "robbed" for days or weeks on end. Find some humor in it. Look at it as character-building. And realize that this type of thing does happen. It's rare, but it really is part of the sport. The fact that two mishaps happened within weeks of each other at these "last chance" marathons demonstrates that shit does happen. It's easy to think thoughts like: This is so unfair. I deserved to get into Boston. Realize that many people train hard and are physically capable of running a BQ time, but don't actually do it. Luck is involved and everything has to lineup on race day for an optimal result. Accept this as the nature of the sport.

These types of incidents all fall into the bucket of things you cannot control. I couldn't control the fact
that I came down with mono (or a mono-like virus) this summer. I'll be the first to admit that I wasn't taking as good of myself as I could have been when the illness struck, but overall I see it as something that happened to me that I couldn't control. The weather is another big one. If Boston 2016 weren't so warm, I'm confident that I would have qualified for 2017. But I didn't and I was able to accept that and move on.

Originally, I thought I would have two good chances at qualifying for 2018: Indianapolis Monumental this fall and then another marathon in the spring. Now, I only have one chance and I'll be going into the training cycle completely out of shape instead of in my best shape ever like I was in June. Even though an illness is completely different from being stopped by a train, both things fall into the same "cannot control" category, so it's no use focusing on it.  It is only natural to be disappointed, though.

What can we, as runners, control? We can control which races we choose to run. I never returned to Love Rox and I now avoid races that are in their inaugural year if I am trying to PR. Older, more established races, have a better chance of being well organized and these obstacles being minimized. But even still, some things are beyond the control of the race director. The Cherry Blossom 10-Miler ended up being 9.4 miles last spring due to a forced re-routing. And then there was the Boston Marathon bombing of 2013. So, really, you have to go into every race prepared for whatever it could throw at you, and focused on getting to the finish line no matter what may occur.

Finally, this is why it's good to have "process goals" like executing the race strategy, nutrition, hydration, pushing hard, etc. Because you may miss your "outcome goal" for reasons beyond your control, but still run the best race of your life.
at 8:24 AM