Being Bold: The Richmond Half Marathon

I spent the past week visualizing the race I wanted to run this morning in Richmond. Four weeks ago, I considered the Columbus Half Marathon to be my breakthrough race of the season, and Richmond would just be “gravy.” I ran a 1:37:33, which was PR by over 4 minutes, so I was extremely satisfied. My first thought after I finished Columbus was that I ran so well, I could just pass on Richmond completely and be satisfied.

But I quickly dismissed that thought and realized that Columbus was really just a build-up to Richmond. At least, that's how my coach had planned it out. Thanks to an amazing training cycle, I’ve reached a new level of fitness that I had never imagined attaining.

I realized that I wasn't afraid of bonking. I intended to start this race at a pace that used to be faster than my 5K PR. I told myself that I was going to push harder earlier and make the tough part start sooner. I was mentally prepared for it to get really, really hard and I intended to push my way through it. I decided that I wasn't going to be intimidated by paces on my Garmin that were faster than I thought I was capable of.

Coach Greg McMillan says, “Going to a new level is scary even if workouts show you're there. In races, be committed and brave. That's where the PRs live.”

Training Plan
I had a pretty aggressive training schedule in between Columbus and Richmond. Thankfully, I recovered quickly and was able to return to speed work the following Thursday. The mileage was the same as it  had been (in the low to mid 40's) but the workouts were intense. Some of the more challenging workouts were:
I ran the 1600's at an average pace of about 6:53, which is faster than my 5K PR pace. The last one was 6:47 and I didn't feel like I was overdoing it. The combination of these three workouts gave me an immense amount of confidence. Not only were the paces much faster than I anticipated, but I felt strong throughout each workout. I recovered well from them, and was able to log some "quality" long runs with speed incorporated as well.

Pre-Race
Having just run the Columbus Half Marathon four weeks ago, I knew that my pre-race routine would work well. I ate bland pasta with chicken and tomato sauce the night before, and the morning of the race I ate a salted bagel with peanut butter, along with a good bit of water.

In terms of feeling rested, I had slept really well all week. This had not been the case for Columbus, so I was determined to not "sweat the small stuff" this time. The issues that caused me to lose sleep prior to Columbus didn't affect my sleep whatsoever this past week.

When I pack for races, I usually bring two of everything, just in case something is wrong with one of the items. I packed two pairs of socks, and I was very glad that I did because one of the pairs ended up belonging to Greg. And it was actually the pair that was my first choice. Phew!

Speaking of Greg, he decided to sit this race out. He broke his ankle back in March, made a strong comeback in Columbus, but felt that he needed more recovery before running another half marathon so soon.

The weather was in the low 40's and sunny with a 5-10 mph sustained wind. My plan was to start the race at a pace of around 7:20, maybe a tad slower because the first two miles were slightly uphill. This is what my coach advised and at first the concept seemed scary. Given that my average race pace in Columbus was 7:24 according to my Garmin, starting out at a faster pace with a plan of speeding up was ambitious. But I spent the past week building the confidence to do it and mentally preparing to push really hard.

In terms of a time goal, I wanted to go sub-1:37 (with a PR by over 33 seconds) and a stretch goal was to go sub-1:36. I fully expected that my time would fall somewhere in the 1:36's but my sports psychologist told me not to rule out the possibility of the 1:35's. Lately he's been encouraging me to not set limits for myself and the more we've talked about it, the more aware I've become on the limits I set for myself. He told me I was in a "purple period" of training-- an extended period of successful training without illness or injury with continued fitness gains. So this was a huge opportunity for me to take advantage of. As I stood at the start line, I went over my race plan in my head a few times. I was prepared to run really hard and really fast.

I lined up just a few rows back from the 1:35 pacer and before I knew it, the race started.

Miles 1-4
The race started and it was really crowded during the first mile. I wanted to be running faster than I was during the first half mile, but there was no way to weave around people. Ultimately, I gave up on trying to weave through people and I told myself that this was actually working in my favor because there was a noticeable headwind.

After the second mile, things spaced out a bit and I knew that mile 3 would be slightly downhill. So I decided to run a bit faster. During mile 4, I finally started to feel comfortable. I rarely feel comfortable during the first 3 miles of a half marathon. I just need to settle in and establish a rhythm. I usually feel like I am kind of all over the place initially, until I settle into a nice even rhythm and effort.We also turned a corner during the 4th mile, which meant there was no more headwind.

Miles 5-8
I think the "old me" would have been intimidated by a 7:11 mile, especially so early in the race, but I told myself ahead of time that I would not ease up on the effort based on what my Garmin was saying. I've run over 20 half marathons-- I know what the effort level should feel like.

I continued to press on, fully confident that I could maintain these faster-than-planned paces. Miles 6, 7, and 8 were in a park. I had run this race in 2012 and I remembered the park being the most challenging section of the course. It was hilly and windy and a bit of a roller coaster. And the terrain isn't as smooth as the rest of the roads.

I crossed the 10K timing mat in 45:25, at a pace of 7:18. I knew that Greg was tracking me and it
made me happy knowing he would be getting a status update on me.

The most difficult part of the race came during mile 7 when I had my Honey Stinger gel. I learned in Columbus that I only need one gel in a half marathon, so I took it during the 7th mile, at the same time that I was running up and down hills and trying to follow tangents. The process didn't quite go as smoothly as I hoped. I spilled some water on me and the honey didn't go down all that well, but I took a few seconds to slow down, and "reset." In spite of all this, I still logged a 7:10 for mile 7.

I've learned that when you hit a rough patch in a race, a mental "reset" really works. It's an opportunity to remind yourself that it was just a tough patch, and you can continue on just as you had before.

Miles 9-12
I was so happy to be out of that park. It was mentally easier to run in a straight line and be back on

normal asphalt. Mile 8 had been mainly uphill, too, so I was relieved to be just 4 miles from the finish line, heading directly toward it.

During mile 11 I saw a friend of mine cheering. I worked with this guy back in 2005 and he since moved to Richmond and is very active in that running community. I knew he would be there and as I ran by him, I said, "I'm going to run a 1:35." I was amazed at how conversational I was, given how hard I was pushing. But I wanted to say it aloud. Saying it aloud made it real, and made me commit to it. I knew that I was on track for a 1:35:xx, but that I would need to continue to push hard to make it a reality.

When I got to mile marker 11, I was ready for the race to be over. It was the first feeling of "oh my God this hurts so much." I fought back and reminded myself that my mind would give out before my body would and I just pushed with everything I had. I knew that once I got to mile marker 12, there would just be one more mile left, and half of that mile would be a huge downhill.

Mile 13 and the last 0.14
Mile 13 seemed to go on forever until the downhill finally came. I saw Greg just before the hill and then just let gravity carry me. The hill was so steep that I was afraid I'd fall if I went as fast as I could possibly go, so I had to put on the breaks just slightly.

Ironically, I think I could have run that last 0.14 closer to a 6:00 if the downhill hadn't been so steep.

After the Race
I was really in shock at the fact that I ran a 1:35:08. Sub-1:36 was a stretch goal, and I was really close to sub 1:35! If someone had told me at the beginning of this training cycle that I would run this kind of time, I never would have believed them. After all, my PR at the time was 1:41:40.

I found Greg and we walked back to the hotel. I was simply beaming. I was so pleased with my performance. I did everything I set out to do and more!

I think it was a combination of the following:

This race really shows that I am in an entirely new league. My original thought was that I would target a 3:30 for Boston but now I am thinking that something around 3:20-3:25 might be doable. I'll just have to see how training goes.

I'll take the next week off from running entirely so that my body can recover fully and I can lay the foundation for Boston. Oh, and run a Turkey Trot on Thanksgiving! 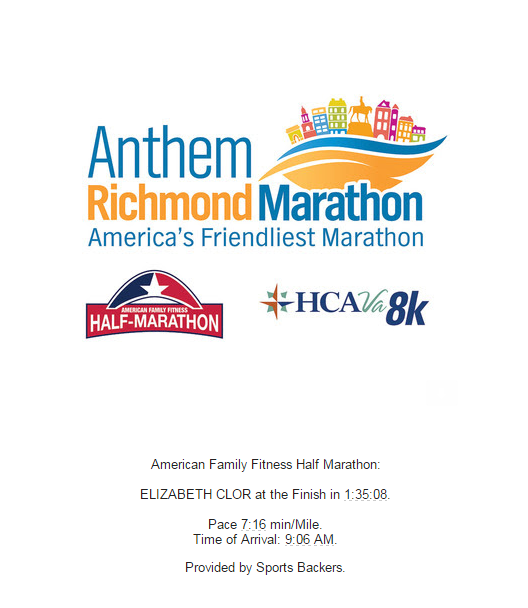