The Columbus Half Marathon: Determined!

1. Stopping immediately before hitting the start line
2. Running in cotton underwear
3. Throwing up after a race


The tagline for this year's Columbus half marathon was "determined." For me, this was very appropriate, given that I was determined to break my five-year-old half marathon PR of 1:41:40.

That Stubborn 2010 PR
Even though I've set multiple PRs at every distance since 2010, I was never able to PR the half, primarily due to weather. Here's a brief recap:


I think I've been fit enough to run faster than 1:41:10 for years, but it's just never worked out. I was kind of okay with it though, because my main focus has been the marathon and qualifying for Boston.

Training
Aside from running my very first half marathon, this is the only half marathon that I've trained specifically for. Once I discovered marathons, half marathons became tune-up races on the way to marathon "A" races. This didn't mean that I didn't care about half marathons. It's just that you are fit enough to run a half marathon when training for a marathon, but not the other way around. Therefore, marathon training has always taken priority.

After qualifying for Boston last spring (actually last fall, but that 3:40:00 wasn't fast enough to actually gain entry) I decided to take a season off from marathoning. I wanted to be really fresh going into Boston, and my half marathon PR was soft.

I assumed that my coach would have me running at least 50 miles per week, with long runs in the 14-16 mile range. This is how I've seen other runners train for half marathons, although I never really researched various plans. So I was pretty surprised that my average weekly mileage was in the mid 40's. Further, my typical long run was only 1:45, which equated to about 11.5 miles at a pace of 9:00-9:30. I only had one long run that was 2 hours, which was 12.8 miles. It was surprising to me that the plan didn't have any runs of 13 miles or longer, but I trusted my coach 100%.

Instead, the focus was speed work. There were quite a few long workouts that had me running really quickly with minimal recovery between intervals. The chart below shows all the interval work I did, and two long progression runs. Basically, I just got really fast, with enough mileage to support me being able to sustain my speed over a half marathon distance. 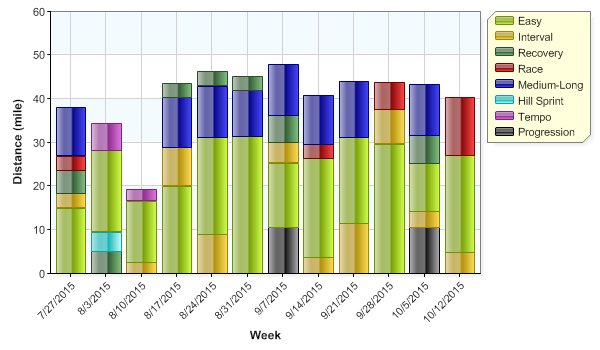 Sleep woes
Unfortunately, the Thursday night before the race, I slept horribly. I slept for 2 hours, woke up from a nightmare and then I didn't fall back asleep at all. I think that the "old me" would have freaked out about not getting enough sleep so soon before the race, but I wasn't too worried, given that I had slept immensely well every single night previously. But then on Friday night, I had another bad night. After not being able to fall asleep for nearly three hours, I resorted to taking a Melatonin and an Advil PM, which I haven't done in over a year, because I simply couldn't afford to lose so much sleep.

I've come a long way in dealing with my anxiety over running/racing, but I still have some work to do when it comes to stress in other areas of my life. I am too easily bothered and stressed by small things and I need to work on it. I used to get this level of anxiety leading up to a marathon, and I've successfully battled that demon. Now I just need to make sure that I don't allow other stressful situations to cause me to lose sleep.

I still didn't let this become a self-fulfilling prophecy. I refused to worry about lack of sleep causing me to race poorly. I ran a 10K last year and I got like 1 hour of sleep two nights before the race and I ended up running a PR. Last month, I ran a set of 5 x 1600's very quickly after not having slept for even a minute. So, I know that I can run well on little sleep, even though it's  not the ideal situation.

Finally, Saturday night arrived and I slept reasonably well in the hotel room. If I had to average my hours of sleep for the past three nights, it would probably be about 4.5. But I wasn't too worried.

Before the race
The forecast ended up being cooler than initially expected. Cold enough for me to want to wear CW-X capri tights instead of my skirt. I had thrown the capri tights in my bag at the very last minute as a safety net, but I had forgotten to pack running underwear to go with them.

Race morning came and I was still undecided. Greg's phone said it was 29 degrees, so I decided I really wanted to wear the capris. When it's too cold, it's hard for me to get my legs moving quickly. I BQ'ed in this exact same pair of capris so I figured I could run a half marathon well in them too. I decided to go with cotton underwear instead of no underwear, because it felt more like what I was used to.

Greg and I left the hotel room just 25 minutes before race start because our hotel was so close. Greg broke his ankle in March, and this was his comeback race. I put together a plan for him which he started at the end of August. In nine weeks, he went from not running at all to half marathon shape!

We hurried to the corrals, and made it with just a few minutes to spare. It didn't feel as cold as I was expecting so I ditched my throw-away pants, hoodie and arm warmers. I expected to wear the arm warmers for the first few miles, but decided that I felt okay without them. The gun went off and I approached the start line. Just before crossing, I looked down at my Garmin to start it and it had already started! Shit! When I pulled the arm warmer off it must have started it. I pulled over to the side and tried to restart the Garmin. My brain was toast and my fingers were numb, and I couldn't get the darn thing to restart. The Garmin kept asking me if I was SURE I wanted to delete that activity, and it defaulted to no, and I had the hardest time getting it to say yes.

Finally I saw that 0:00 and crossed the start line. I was extremely flustered but told myself it was okay. Heck, one of my friends tripped and fell during the first mile of her marathon, and ran the whole thing with a bloody knee. This wasn't bad at all. Just a rocky start.

Miles 1-4
So, here I was starting the race in cotton underwear, with the past three nights of sleep averaging only 4.5 hours, and a flustered Garmin start. But I was taking it all in stride. I was just going to do my best and roll with it.

In terms of a pacing strategy, the plan was to start at a pace of around 7:40 and speed up from there. The first two miles are uphill, so that prevented me from starting too fast. It was kind of tough to get into the groove of the race for the first three miles. I didn't warmup (like I had planned) so running that fast out of the gate is just a shock to the system.

I had two Honey Stinger energy gels and a hand-held water bottle. I took the first gel 25 minutes into the race. It went down easy and I had no issues getting it open with my numb hands, because I had cut a small slit in it beforehand.

Miles 5-8
Finally things started to feel good, and I got into a good rhythm. The pace felt like half marathon
pace-- "comfortably hard" and sustainable. I soon encountered the same problem I had during the B&A marathon last spring-- the water bottle became too cold to hold. Even though I was wearing convertible mittens with "hot hands" hand warmers inside of them, I have really bad Reynaud's syndrome and my hands get numb very easily.

I didn't think I could hold onto the water bottle much longer. My watch read 55:00, and I had planned to take the second Honey Stinger at 70:00. But I couldn't continue to hold the water for that long, so I took the gel early, drank water and then tossed off the bottle 55 minutes into the race. I do not like to take gels with water station water. It slows me down too much and I'm not good at getting enough water. For about 5 minutes after that I was burping a lot, but then I felt better. This was also during the biggest hill of the race, mile 7.

Miles 9-12
Greg and I chose to run Columbus because we had done the full marathon last year and recalled the first half being extremely fast, even though it was a net 0 elevation change (start and finish in the same spot). The hills aren't very steep, but it's hilly enough to provide variation for your legs. And the toughest hills are miles 1, 2, and 7, with the later miles being mainly downhill, except for mile 12.

During this portion of the race, I decided to increase the effort. It had almost felt a bit too comfortable up until now and I was ready for it to get hard. So, I made it harder by pushing harder. When I got to mile marker 10, I couldn't believe how (relatively) good I felt. I've felt like death many times at mile 10 in a half marathon but I felt strong and ready to continue pushing through.

I told myself there wasn't much to risk in turning on the gas because I had run really fast up until now. If, for some reason, I couldn't maintain a higher intensity, it was okay because I had so many fast miles behind me.

Mile 13 and the last 0.19
As I had remembered from the full marathon, the last mile was downhill. I pushed and pushed and I saw the pace on my Garmin get faster and faster. I was totally on fire, plowing through lots of other runners. I could not believe how fast I was running!

I hit the mile 13 marker and my watch said 1:36:xx. This meant that I would be somewhere in the 1:37's! But the finish line still looked so far away that I didn't want to chance it, so I powered up the slight incline to the finish as the official clock still read in the 1:37's.

I crossed the finish line, and felt like I typically do after a hard sprint to the end, completely wasted. I walked very slowly and got my medal. About two minutes later, I had the urge to vomit, and so I did. It was just honey and water, but I was shocked that I needed to do that. I've never vomited after a race in 10 years of racing. In fact, the last time I threw up was in college from drinking too much! It really surprised me, because I felt awesome during the race. I think that 2 Honey Stinger gels is probably overkill in a half marathon, especially when taken so close together. Lesson learned.

I waited for Greg to finish, and he came through in 1:49:26. Not bad for just 9 weeks of training after 5 months of no running!

Final Thoughts
While this race definitely shows my increase of fitness, I wouldn't have been able to pull it off without some key mental skills I've been working on:


I'm thrilled with my PR by 4:07. I earned every single second and I had a blast doing it! 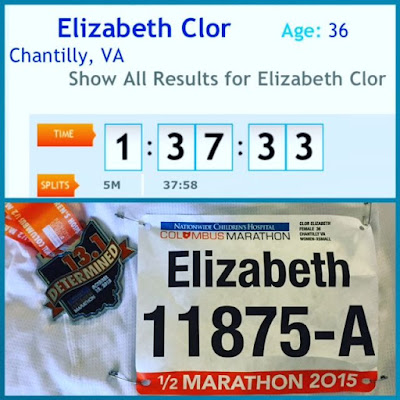