After running the Rock 'N Roll Philadelphia half marathon last Sunday, Greg and I drove down to the Outer Banks of North Carolina for a week-long vacation.

Even though the race hadn't gone as planned, my spirits were high and I was excited to enjoy a week of relaxation with my husband. With just four weeks to go before the marathon, this would also be an intense week of training. Greg and I visited the Outer Banks last summer, and I had a really successful week of training.

Priority one was a proper recovery from the race. At the hotel in Philadelphia, Greg and I took ice baths and then donned calf compression sleeves for the 7-hour drive. When we finally arrived at our beach condo, it was after 9:00 and we were both dead tired.

We awoke to humid, 70-degree windy weather, which would be the norm for almost every morning of our vacation. I can't remember ever running the day after a half marathon, but my coach had a 60-70 minute recovery run on the schedule, so I complied.

We stayed at milepost 10 in Kill Devil Hills, which is where the beach road begins to have a running
path along the side if you head south. The wind was forecast to be coming from the north each day, which meant a tailwind for the first half of the run, followed by a headwind.

Monday: 6.5 miles recovery
My legs were not as nearly as bad off as they normally are after a half marathon. My initial thought was that I didn't have the opportunity to really wear them down in the race because the heat beat down my energy level so much. Another theory was that I was so well trained that my legs could handle running the day after a half marathon. Greg came with me and was hurting more than me, but we both were in favor of going very slowly.

Tuesday: 10.5 miles easy
Again we faced humidity, warmth and wind. This run was more about building aerobic capacity than anything else, so we didn't push the pace.

Wednesday: Rest
It was very fortuitous that I had a rest day on Wednesday because we had quite the storm! It was pouring down rain and winds were 30 mph! We spent the day inside putting together a puzzle and enjoying the fact that we didn't have to do anything but relax.

Thursday: 10 miles, including intervals
There was a high school track located about 2.5 miles from our condo. This workout is actually supposed to be done on a hilly route, but given that we weren't going to find that anywhere, we figured a track would be a good option as it would be a softer surface away from cars. We warmed up and cooled down by running to and from the track.

I was completely beat by the end of this workout and I just slugged my way back to the condo during the cool down.

Friday: 6 miles easy
This run was extremely humid and I didn't feel at all energized. It must have been a combination of the hard workout the day before and the lack of sleep from not having my own bed. But, I got it done!

Saturday: 21.5 miles
My plan had 20-24 miles on it and my original goal was 22. I must have mapped out our route a half a dozen times, but we ultimately ended up winging it! I even had some anxiety dreams about how hot this run would be, and worried that I'd get sunburn. Before heading out, I applied SPF 75 sport sunscreen everywhere.

Greg and I got a relatively early start at 6:30. We couldn't start much earlier because the roads are not well lit and the sun rose at 6:50.

The first 10 miles were an out-and-back along the beach road. South, and then north. We refilled our water bottles at the condo and then headed south for the track. We figured it might be nice to run a few laps around it. When we got there, we realized the track was the worst place we could be. The wind was more noticeable, there was no shade and the sun was getting high in the sky. After two laps, we abandoned the track and headed for a path that led to the Wright Brothers memorial. The plan was to run around the memorial (about a mile loop) but we realized that we were on a 3-mile bike path, indicated by signs, so we followed that instead.

Great choice! The bike path was partially shaded and led to an area where we got a nice view of the bay. We ended up running on some neighborhood roads and it was a nice change of scenery. We turned around at mile 16 and headed back to the beach, stopping at a gas station to by new water bottles. Miles 16-19 were by far the hardest of the run, and I was completely out of water by mile 18.

We made our way back to the condo and the sun was in full force. I decided it would be okay to stop
at 20 or 21, since the plan had 20-24. I was getting really hot, but I dug deep, found some mojo and actually picked up the pace. Greg and I ended up with 21.5 miles at a pace of 9:49.  It took us 3 hours and 30 minutes, and I expect my marathon time to be around 3:35. The goal was "time on my feet" and this was certainly accomplished. After the run, I took nature's ice bath in the ocean!

Sunday: 5.5 miles recovery
My legs felt surprisingly good during this run. However, about 3 miles into it, the sun came out in full force and I just felt drained. I was very happy to finish the run, capping off the week at an even 60 miles.

Overall, the vacation was wonderful. It was overcast nearly the entire time, and not really beach appropriate, until Saturday when the sun decided to make an appearance during our long run. We didn't get a lot of beach time, but we enjoyed watching movies, doing our puzzle, eating good food, and exploring the Outer Banks.

With just three weeks to go before the marathon, I am feeling super confident in my training. Here is a look at the past two months: 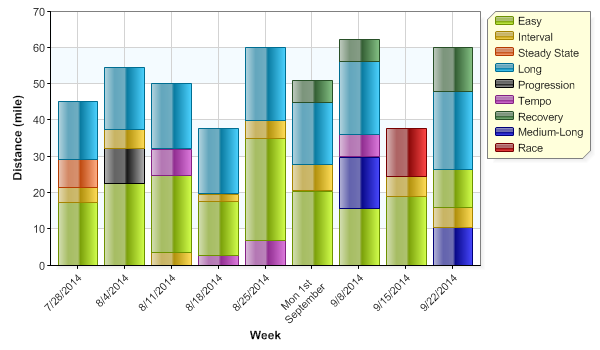 I'm back home now, and looking forward to some nice early fall running weather. Unfortunately, most of it will be in the dark before work, but it will be a nice change from the wind and humidity!