This morning I ran my 5th Cherry Blossom 10-miler. I used this race to practice some of the things I mentioned in my post about pushing past limits in order to get myself to the next level.

Background
Whenever anyone asks me what my favorite race distance is, I say "the 10-miler". It's short enough so that
the pain isn't horribly prolonged, but it's long enough where you don't feel like you are about to die for the entire duration of the race. I've also raced consistently well at the 10-mile distance and I feel like it's my "sweet spot" in terms of performance. In my first few years of running, I would set 10K PRs during 10-mile races.

I had a few goals for this race. The primary one was to see how much I could push myself. The weather was going to be ideal (low 40's and sunny), so there would be no unknowns there, and I knew the course, so this would be the perfect chance to really test my limits in terms of pushing. Of course, I always go into races
wanting to push my hardest, but I've never really focused on it so heavily beforehand. I've usually focused more on the time goal and not my effort level. In the two weeks leading up to the race, I thought a lot about the mental strategies I would need to use to push hard when things got tough. I remembered all the mantras I have used in past races to keep strong and I visualized myself during the last 3 miles pushing hard instead of giving in.

My other goals were to go into the race relaxed and well-hydrated and run the tangents. In terms of a time
goal, I wanted to beat my PR of 1:15:52 from 2012 and ideally get under 1:15. I tried to do this last year, but it was extremely windy during miles 7-9, so I ended up with a 1:16:10. This year, I was fairly confident in my ability to run a sub-7:30 pace, but just barely, and I know that this course always runs long on my Garmin. I suspected I would be able to run a sub 7:30 pace, but I didn't know if that would necessarily equate to a 1:14: xx.

My training in the week leading up to the race was solid. I ran 10 easy miles on Monday, 6 x 800m on Tuesday (7 total), rested on Wednesday, and then did some easy running on Thursday and Friday. My running felt good all week and I felt ready. Even though I am in the middle of marathon training, I prefer to look at my training as not just centered around one race. If I do, it puts too much pressure on me for that race. I didn't see Cherry Blossom as a tune-up for the sake of marathon fitness, but a race in and of itself to be prepared for and raced to my full ability.

Before the Race
I slept about as well as can be expected the night before the race. I woke up several times during the night wondering what time it was, but overall, I think I got about 6-7 quality hours. Greg and I woke up at 5:15 with a goal of leaving the house at 6:00. It turns out that this wasn't enough time to eat our breakfast, go to the bathroom, get dressed, and get all of our stuff together. I'm including this so that I know to wake up earlier next year! We ended up leaving the house at 6:15, and we were so rushed that Greg didn't bring his driver's license and neither of us brought money. We had our metro cards, but I wasn't even sure how much money was on mine.

Normally a situation like this would have made me a bit anxious, but instead I found it thrilling. We drove to the metro station knowing that we'd end up in DC without money or ID and only the metro cards to get back. It actually helped distract me from thinking about the race. We were also later than I wanted to be, so I was worried that we wouldn't have enough time to use the porta potties.

It turns out, we did not have enough time for that, but it was fine because we didn't need to anyway, which is a first. We got into our corral with about 15 minutes to spare, which is what I planned for, since the corrals get really crowded.

Miles 1-4
As the race started, I felt really relaxed. I was excited to finally be there as I had been anticipating this race for the past few weeks. In the spirit of pushing hard, I didn't want to look at the Garmin too much initially. I told myself to trust my experience with the 10-mile distance, and that I would know what the appropriate pace felt like. Trust. I repeated that to myself over and over during the beginning. Trust your training. Trust you can push hard for the whole race. Trust that you won't blow up. Trust your experience. I didn't look at my Garmin until it beeped for the first mile. 7:37. A little slower than planned, but better too slow than too fast. I figured I had 9 miles to get the pace down.

Mile 2 was over a bridge which included a slight uphill and then slight downhill, and then repeated as we turned back around on it. The pace was feeling challenging, but I told myself that it should feel hard for the entire 10 miles. It's not like a marathon that feels easy during the first hour or so. Again, I avoided the Garmin because I didn't want to be discouraged by a slow pace, or freaked out by a fast pace.

I carried a water bottle for the first four miles, and it felt great to finally toss it aside and have my hands free. I also didn't want to over-drink. I think I've made the mistake of drinking too much during races, resulting in cramping. I had hydrated well beforehand and I drank a good amount during miles 1-4, so I felt confident tossing the bottle and not having any more water for the last six miles. 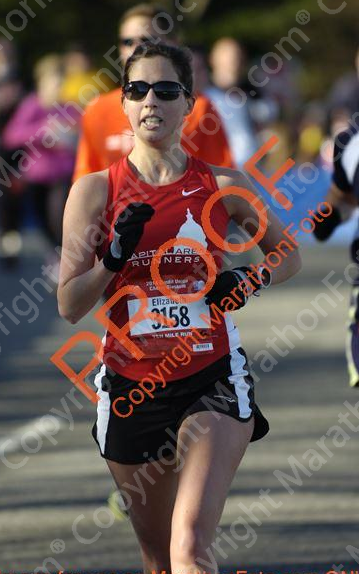 I only looked at my Garmin when it beeped for the mile. I wanted to run by feel and not slow down or speed up based on my pace. I looked at the overall time when I crossed the 5-mile mark, and it was 37:24. I was on track for my sub-1:15 and feeling great.

There was also a timing mat for the 10K mark, which I hit at 46:33. That's a good 10K time! I thought to myself that I probably could have set a nice PR in the 10K distance today.

Mile 6 is always challenging in this race because there are a few hills and things start to hurt a lot more-- and yet you aren't really close to the finish. I always dread mile 6 of this race, but things tend to get easier when we reach Hains point at mile 7. We ran around a lot of curves during the 7th mile, and I was longing for the road to just be straight so I wouldn't have to focus on tangents. I started repeated "run to mile 7" over and over again to myself. This got rid of the negative thoughts that were starting to enter my mind. It worked so well that when I passed the mile 7 marker, I kept repeating it! I laughed at myself a bit, but the mantra was working.

Miles 8-10
I couldn't believe I still had three miles to go. It seemed impossible and I was ready for the race to be done. I started envisioning myself dropping out at various points, which is a thought that always crosses my head
during races. I told myself to push and trust. I kept reminding myself that this was my chance to really see how hard I could push. After thinking about this for weeks, here it was-- the time when I wanted to push hard despite how tired I was feeling.

During the 9th mile there was a bit of an unexpected headwind. It wasn't horrible, but definitely noticeable, given that I was already feeling so worn out at that point. It also felt like a slightly uphill mile. But maybe I was just really tired. I glanced down at the Garmin a few times and noticed my pace was significantly slower and I was at risk for not meeting my goal. I told myself that the pain was just temporary, it would be over soon. Now was not the time to give in, after pushing so hard for the first 8 miles.

We finally hit mile 9 and had just one mile left! It was so hard! The last mile includes the biggest hill of the race and I used every ounce of energy I had to push up it. I finally reached the top, my Garmin beeped 10 miles, and then I ran a downhill stretch to the finish line.

The Finish and Beyond
I felt like death immediately after crossing and knew that I did push past limits. I beat my PR from 2012 by 26 seconds, with an official time of 1:15:26. According to my Garmin, my average pace for the run was 7:29, which is pretty much what I predicted-- with the official race pace being a 7:32.

I found Greg about a minute after crossing, but I wasn't able to speak to him for a few minutes. We went immediately to the metro station without stopping for food or socializing, as we were both eager to be home. Fortunately, we made it back to our car without needing money or IDs! I have to say that one of the accomplishments of the day was how efficient we were at getting in and out of the city. No baggage check, no post-race food, no socializing- just the race and back home.

Getting super data-focused, I could see this as my second "fastest" race ever. Looking at the McMilllan running calculator, the only distance where I have run a faster equivalent is the 5K.


I was really pleased with my performance on this one. I achieved all of my goals: I went into the race feeling relaxed, I pushed hard when things got tough, and I ran a sub-7:30 pace. I know that my previous 10-mile PR was pretty solid, so at this stage in my running career, I don't expect to be setting huge PRs. I'm thankful to be getting faster slowly but surely, and that the 10-mile distance continues to be one where I excel.