I haven't been able to blog as much as I would like lately, so this post covers three separate topics.

Nike LunarGlide 5
In May, I decided to re-visit my running shoe situation. Thanks to the 90-day return policy of RoadRunner Sports, I was able to experiment with quite a few different shoes:


With all these changes and experiments, I ultimately ended up getting injured. As I started running again, I posted on the Runner's World forum and asked for advice. I am a mid-foot striker with a narrow foot and mild pronation, looking for a shoe that won't hurt the bottoms of my feet. I was worried that I would not have a shoe to run the Chicago marathon in and I was starting to get nervous. Someone recommended the Nike LunarGlide 5, so I went to RoadRunner Sports and asked to try it.

I ran around the store and immediately fell in love. My feet felt like they were getting a massage. The fit was good, and I absolutely loved the way they felt. I bought them and started wearing them for my long runs. I was absolutely amazed. When the runs were over, I didn't feel a need to immediately take my shoes off. My feet felt great! I ran the Chicago marathon in them and my feet felt great, and I didn't get injured.

Best of all, if you go to the Nike.com website, you can customize this shoe and get it in whatever color combination you want. You can even customize the words on the tongue. My shoes say "Zebra" on one foot and "Power" on the other. They are red, white, and black to match my Capital Area Runners gear. It only costs about $35 extra, so I figured it was worth it to get the shoes to look exactly how I wanted.

I will still wear the Mizuno Wave Elixir for speed work and races that are half marathons and shorter. Don't get me wrong, the Nike would probably serve this purpose fine, but I have been a faithful Elixir wearer for years and I like having two types of shoes I rotate between. The Elixir is actually being discontinued so I purchased a fairly large stock that should last me about 3-4 years.

San Francisco
I went to San Francisco for business in the middle of November. I was there for almost two weeks, so Greg flew out and joined me over the weekend. I'd run in San Francisco a few times before, so I knew exactly how to run to the flattest area of the city-- the Embarcadero.

For my birthday, Greg had reserved us a semi-private wine tour of Napa Valley. On the way there, the driver showed us a few of San Francisco's key landmarks. We were blown away by the Palace of Fine Arts, which I had never seen or heard of, even though I had been to San Francisco a number of times in the past. Greg, being more adventurous than I am, was determined to find a way for us to run there the next day. I told him it would be impossible for us to get there without running on some very steep hills (so steep, you can't even run on them) or taking this long route that would be 10 miles.

He insisted that we could and found a way for us to get there in just over 3 miles. Minimal hills. It was so thrilling to run through this dome. It was almost like being in the Disney World half marathon again. It was also fun running around that general marina area. I had always stuck to the Embarcadero, because it was what I knew.

I was also lucky to be in San Francisco while we were having unseasonably cold weather back home. It felt good to be running consistently again, after about two months of no training. I tapered for Chicago, recovered from Chicago, ran New York City, and then recovered from that. While in San Francisco, I ran a two-mile tempo run, and it was tough. It was definitely an indicator that I hadn't done speed in a long time!

Turkey Trot 5K
I ran my 8th consecutive Virginia Run Turkey Trot 5K yesterday morning. I suspected that this would be my slowest Turkey Trot in a long time because I was so out of shape. I did a short track workout on Monday, but aside from that, I hadn't run intervals since the end of September. And my overall mileage had been low.

But this didn't stop me from giving it everything I had!

It was 25 degrees with a light breeze. The forecast the night before had been for 22 degrees, 16 mph winds, which equated to a "real feel" of only 8 degrees. So I was actually quite thankful that it wasn't as cold or windy as it could have been. And with the sun, I actually felt warm in parts of the race!

Greg and I parked, and warmed up for 1.5 miles. I was worried that we parked my new car in too tight of a spot, and that the two mini vans next to me would certainly ding my car. Greg told me that we'd just have to run really fast and get back to our car before they did!

We got to the start line, where, as usual, a ton of kids were lined up right at the front. One of the challenges of this race is that so many kids and slower runners start at the very front, and it's annoying trying to pass them all. This race had over 3,000 runners, so it was definitely sizable. I felt very relaxed going into this race, probably because I didn't have any expectations or self-imposed pressures to run a specific time. I was hoping to get sub-23:00, but I just didn't know what I was in shape for.

Greg was also out of shape, and he predicted that I would beat him because I had two short tempo runs and a track workout under my belt, whereas he didn't have anything. He got ahead of me as we started, and I remained about 5 seconds behind him for the whole first mile. I wondered if I would be able to pass him, but I didn't make it a focus. Mile 1: 7:26

Due to the nature of the course, I know that the second mile is always the slowest. I didn't look at my Garmin during this mile and just kept the effort level the same. It felt so hard, and I didn't feel like I was running fast. Yup. Out of shape! I still passed a few people in the second mile, but it's amazing how that 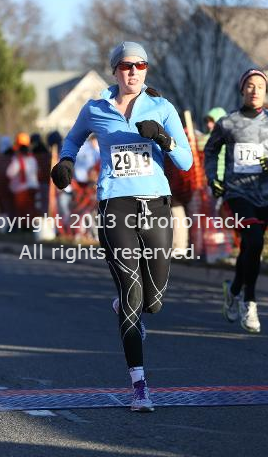 At the start of the third mile, I still had Greg in my sights. But by this time, he was about 15 seconds ahead of me. He turned a corner and really sped up, so I didn't see him again until I finished.  In my head, I briefly wondered if I would be able to go under 23:00 with these paces. I wasn't sure, but I know that the last mile of this race is always my fastest. This is where knowing the course and having run it 7 times in the past comes in handy. I gunned it. It hurt, but I told myself I it would be over soon. I pushed and pushed and passed a few people during the last stretch, netting a zippy 7:03 mile.  Mile 3: 7:03.


It's interesting to experiment with different pacing strategies. Last year I knew what kind of shape I was in, whereas this year I didn't. I therefore started far more conservatively this year for fear of not being able to sustain a fast pace.

I'm definitely glad I did this race, and the plan is to spend the next five weeks building my speed back so I can be more competitive at the New Year's Eve 10K. I was noticing that even though it hurt a lot during that final push, it also felt really good and empowering to be running so strong. It felt "bad ass" as Greg says. (His last mile was in the 6:40's). Most importantly, I was thankful to be un-injured and healthy enough to race.
at 11:05 AM