On Monday, I ran my 4th Ringing In Hope 10K. Don't be deceived by the number-- this race occurs multiple times per year, and sometimes on different courses.

I typically write a race report within hours of finishing the race so my memory is fresh and that I can have "closure" and move on with my day. In the case of this race, I knew that my report would be overshadowed by feelings of frustration and disappointment, so I waited until I could think more rationally and positively about my performance.

I ran the 5K version of this race last Memorial Day and it was so sweltering hot that I had decided I wouldn't return again. But when the forecast came out for low humidity and relatively cooler temperatures, I changed my mind and decided to go for it. I had also sworn off racing the 10K distance in warm weather (with the exception of Laywers Have Heart-- which I do every year). However, the forecast was for 54 and sunny at the start, 60 at the finish with the sun rising quickly. I thus opted for the 10K thinking that my performance would only be impacted slightly by the heat.

I didn't really have a goal in mind for this race. I ran this exact course on New Year's eve in 45:57 and figured I was probably in similar shape now. I decided not to look at my Garmin and I was just going to run by feel, since that has worked for me in shorter races in the past. I had no idea if the weather would affect me or how much, so I figured that trying to run a certain pace wouldn't be smart-- I would just feel the race.

Before the Race
In the days before the race, I made sure to hydrate well. I drank plenty of water as well as coconut water to make sure I had enough electrolytes. When I ran this 10K back in 2011, I suffered from heat exhaustion and was dizzy/spacey for awhile after the race was over. I theorized that I was drinking enough water, but perhaps not getting enough electrolytes so I since made that a priority.

I dressed in a sports bra, shorts, visor and sunglasses. I knew the sun would be strong, so I wanted to keep it off of my face. When Greg and I arrived to the race, it was actually chilly in the shade, but warm in the sun.  I think if this race had started at 7:00 as opposed to 8:10, things would have been a lot different for me. I wasn't obsessing about the weather, as I used to do, however. I had made a conscious decision to run the 10K instead of the 5K because I thought the weather wouldn't be warm enough to slow me down significantly. I was mentally prepared, physically rested, hydrated and ready to go.

My warmup was just under two miles, and I was feeling great. Afterwards, I met up with my friend Liz, who I had seen just two weeks prior at the Angel Kisses 5K. Liz was running the 5K at this event, too and she told me that they were starting the 5K at 8:00 and the 10K at 8:10. This wasn't advertised anywhere on the website or in information emails, but I figured it wouldn't change things too much and might even be better because I would know who was in my race versus the 5K. I cheered for Liz as she crossed the start line and then chatted with Greg as we waited for my race to start. Greg, who is still recovering from a foot injury, was prepared to take photos of me and hand me a bottle of water at the halfway point.

Mile 1: 7:23
This race features a long, gradual uphill during the first mile. I always tell myself not to go out too fast on it and to save up for later in the race. I ran up the hill at what felt like a conservative effort for a 10K, and then sped up when it came time for the downhill. I noticed that there weren't very many women ahead of me in the first mile. Maybe 4-5. This worried me in thinking that I had gone out too fast, but everything felt good.

Miles 2-3: 7:41, 7:58
At the end of the first mile and for the entire 2nd and 3rd miles, I was dodging 5K runners. I hadn't thought about this when I learned of the different start times. Typically everyone starts at the same time so I am not passing slower 5K runners/walkers on the first loop. Potentially a few 5K walkers on the second loop, but
they are all spread out by that point. Instead, I spent my entire 2nd and 3rd miles passing people, yelling "passing" as I ran through very narrow areas of runners. No doubt I was expending extra mental and physical energy here, and it was extremely annoying. There were large families with kids all over the course and nobody was telling the 5K runners to keep to one side or the other. There were several occasions where I just had to plow my way through and yell "sorry" as I brushed against people. It was crowded and I had no other choice. Other 10K runners were doing the same.

The last half of the third mile is a long, gradual uphill. Weaving through people at this point was draining me and at the same time I started to feel really winded and tired out by the heat and sun beating down on me. I had been closely following this one runner since the start of the race, and I watched as she made her way up the hill, keeping my eye on her for motivation and reminding myself of the pace I wanted to be running. When everyone around you is going up a hill at a pace that's 3-4 minutes per mile slower than you, it's hard to stay motivated to run your fastest. Looking at my 7:58 split after the race confirmed that this mile really took its toll on me. For reference, my half marathon pace from Disney last January (which was 60, humid, but no sun) was around 7:50. My Love Rox half marathon pace was even faster in cooler weather.

Finally, I saw Greg at the top of the hill, who handed me a water bottle. I took a few gulps and poured the rest over my head. It felt awesome.

Miles 4-6: 7:53, 7:48, 8:10
It wasn't long before I felt hot again and I was confronted with the same hill from the first loop. Instead of trying to be conservative, I was just trying to survive my way up it, trying to not fall too far behind that woman in the orange shirt who I had in my sight in the first mile. I felt like I was bonking and I was doing my best just to hang on. I was wondering if everyone in the race was feeling this awful but when two women passed me (one during the 4th mile and one during the 5th mile) it didn't seem like they were struggling. 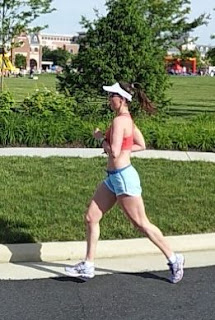 My motivation for the last two miles was just to keep my placing and try to win an Age Group award. I actually caught up to the woman in the orange shirt during the 5th mile and we ran next to each other, but then she got ahead again and I simply couldn't keep up. She looked like she was in my age group, but also sort of looked like a newbie, and I thought that on any other day I could probably easily beat her.

I took some water from a water station and poured it over myself. It felt good, but I was still feeling so exhausted and worn down by the heat. Finally, it was time for that last long uphill. I knew the race would be over soon and I knew I just had to get up the hill and I would be almost done. That other woman was about 10 seconds ahead of me. The woman who passed me in mile 5 was about 20 seconds ahead of me. Liz was cheering for me at the top of the hill and it motivated me to keep giving 100%.

Greg yelled "you're in 7th place" as I was approaching the finish line. I gave it all I had, but I couldn't close the gap between myself and either of the women ahead of me.

After The Race
I felt miserable. I was so exhausted physically and happy that the race was over. Liz and Greg found me and
got me a water. I asked Liz how she did and she said she won the 5K. First place! I was so happy for her. I figured I probably won something too, just because Greg said I was 7th overall- not because I considered my time to be competitive.

Liz got her award for winning the 5K and we waited for the 10K results to be posted. I saw that I got 2nd place in my age group with a time of 48:29. The woman ahead of me finished in 48:19- exactly 10 seconds, just as I thought. She took first in the age group.


About 5-10 minutes after I finished, I started seeing black spots and getting dizzy. This happened to me after the Nike Women's half marathon, which was also sunny and warm at the end. This continued off and on for a little bit but eventually went away after spending some time seated in the shade.

I ended up winning a $25 gift certificate to a local running store, which almost covers my race entry. I had mixed emotions about the whole thing. I would have been much happier with second place if the first place winner had been farther ahead of me. But the fact that I was tailing her the entire time and she looked like somewhat of a newbie annoyed me. I was frustrated that the heat sucked so much energy out of me that I wasn't able to trim off 10 seconds from my time.

Takeaways
Unfortunately, it took me awhile to be able to focus on the positives from this race. In the hours after the race I felt frustrated and disappointed. Even though I knew I ran the best race I had in me and that I prepared well, it was disheartening to learn how much slower I am in 60 degree, sunny weather. It's not that hot. This kind of weather is perhaps the toughest for me to deal with mentally. If it were 80 degrees, then everyone would have been affected. If it were really windy, then everyone would have been affected. I have others around me to "validate" that the race was tough due to weather. But in this 60-degree sunny weather, it seems like I am the only one affected to such an extent.

I was also disappointed that I couldn't just shake it off and move past it quickly. This is something I've been getting really good at lately-- focusing on the positive and not letting a poor performance get me down. This race was different and it made me realize I need to keep working on staying positive and process-focused.