As a "recovering perfectionist" I am learning that I tend to set the bar too high. Previously, I would go into the majority of my races expecting PRs. Unless I was coming off of an injury, or the weather was warm, then I would shoot for a PR and then be disappointed when I didn't get it. I always thought this was a good thing because I wanted to set the bar high. I wanted to push myself. But now I am realizing that pushing oneself doesn't mean setting the bar high for every race in terms of a time goal.

There are three "levels" of performance, according to my sports psychologist. You can run the best race you have in you on race day, and end up in any one of these three areas.

1. You have your "bottom line" which is the range of times you would get if things didn't really go your way. You might expect to fall your bottom line range if the weather were hot, if you were coming off of an injury, if you just didn't "feel it" that day, if your nutrition or hydration were off. There are many reasons why you might run in your bottom line range.

2. You have a "mid-range" area where if things went well, that's where you'd land. You felt good, the weather was decent, you had trained well, etc.

3. You have an "upper end" area where the PR and beyond lives. This happens when you have an amazing day, everything comes together. You're feeling great, you've trained well, you're well rested going into it, etc.

Of course, there are always the out-liers on the bottom end, like if you injure yourself during the race, or have major digestive issues, etc. That wouldn't be considered part of #1, that would just be an extenuating circumstance, which happens to everyone from time to time.

In a given year, how often can I expect to be at #3? Previously, I was expecting more than 50% of my races to be at #3. This isn't realistic-- at least not for someone who has been running for as long as I have been. For experienced runners who have been running for awhile and are past the point of setting PRs at each race, it's realistic to be at #3 about 20% of the time. My sports psychologist told me that "normal" and "realistic" for experienced runners is 50% at the bottom line, 30% in the mid-range, and 20% at the upper end. He said if you ask elite marathon runners how often they run a marathon that they think is a very strong performance, they will say about 1 in 5. At the end of 2013, if half of my races are at my bottom line, and 30% are in the mid-range, and 20% are at the upper year, then it's been a good year. If I exceed that, then it's been a great year.

He also said that if he were to interview the first 1,000 finishers of a large race, that probably 20% of them would have set PRs, 30% would have been in their mid-range, and half of them would have been at their bottom line. This was an eye opener for me. I don't think he's lying-- he's been in this profession for over 25 years. So I've been digesting this concept for awhile now and trying to apply it to myself. 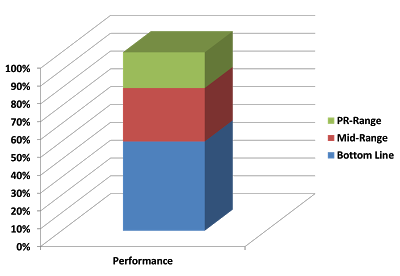 This is not to say that I should only try to get a PR in 20% of my races. Rather, to understand that PRs are the exception, not the rule. And I also think the point is that I need to go into a race not trying for a particular time, but to do my best and focus primarily on how I will run the race, not what the result will be. This "setting the bar" is not so much about goal setting, but being realistic about how I review my performances afterwards. The key is that you can run to the best of your ability and land in any one of these three areas. Running the best race you can on a particular day does not necessarily equal a PR, even if you are in the best shape of your life.

In the past, I've always expected my marathons to be at the upper end.  My first six marathons were all PRs and everything went perfectly smoothly. In fact, I exceeded my expectations with every single one of them! Since I know I am capable of running fantastic marathons, I have always expected it out of myself. I figured that if I set the bar any lower than how I performed at my first six, then I would be doing a dis-service to myself.

This is simply unrealistic and it creates a great deal of pressure, resulting in exactly the opposite of what I want. Going into each marathon, I knew I wouldn't be satisfied unless I was in that "upper end" of performance range, just like I had been for my first six. And as the years went by, I just felt more and more pressure to prove myself. Thus, my marathons have been a very long string of anxiety-related blow ups.

My sports psychologist wanted me to think about what specific ranges of times I would put in each bucket for 2013. The ultimate goal of training is to lower all of the ranges, but this doesn't happen overnight. I shouldn't be revising these buckets every time I race-- I need to be focused on more of the big picture of my running as opposed to any one specific race. Will I run a 3:30 marathon? Absolutely, I know I will. Will it be the next marathon I run? I don't know. I'm focusing now on the bigger picture of my running, and I won't let one race, one day, be the judgement of weeks and months and years of hard work and dedication.

One of my many new year's resolutions is to set the bar high for myself in a completely different way. Instead of always trying to set PRs with my running I will have extremely high expectations in the areas of:

These are by no means easy for me, but they are all within my control. The bar is set for 2013, and I'm looking forward to a happy, healthy year!
at 1:32 PM