This morning I ran my 7th consecutive Virginia Run Turkey Trot 5K. I love this race, know the course like the back of my hand, and it's only 10 minutes away from my house. As usual, the weather was perfect for racing-- mid 30's and sunny. I wore long sleeves, CW-X Capri pants, sunglasses, gloves, and my trusty Mizuno Wave Elixirs.

I really didn't know what to expect time-wise out of this race. I had a general idea of where my speed was from some track workouts and my recent half marathon. Usually I try to run a PR, but I knew this year that was highly unlikely. Even if I was in peak condition fitness-wise, beating my 21:29 from last year would have been challenging.

I decided I would try to run the first mile at 7:15 and then take it from there. My goals were to run strong up the hills, stay mentally focused, and have a very strong final kick. Ultimately, I wanted to run the best race I had in me today.

Finding motivation to push hard in a 5K is tough when you aren't going for a PR. Typically, the goal of a new PR is what makes me dig deep and push myself to my limits. Today, I kept reminding myself that the goal was to run the best race I could. Staying strong at the end of a 5K is a skill I know I have, regardless of what the clock says, and I would demonstrate that skill this morning.

Greg and I warmed up for just under 2 miles. As is typical for my warmups, I felt winded for how slow we were going and so did Greg, but for some reason, that's always the case during my warmups. We lined up in the starting area, and were ready to go. Although this is a neighborhood race, it's a rather large Turkey Trot. Over 3,000 show up for it, and for the past two years the race has actually sold out. There are a lot of kids who like to line up at the front which I have come to expect. This morning I heard a kid say "last year, I was in first place for 10 seconds!!!"  Haha. Now I realize the goal of many of the kids is just to see how long they can be in front before getting passed by the 15:xx runners.

The race started, and I felt good. I went out too fast on the initial downhill and had to reign myself in again during the remainder of the mile. I clocked in at 7:12 for mile 1.  "Now own it," I told myself. Own that 7:12 pace and this effort level and you will be golden. Just two more miles.

I knew that there was a large hill during mile 2 and my pace would likely get slower. But for some reason, the hill didn't seem as steep this year as it has in years past. It did seem as long, though. I told myself to stay strong, and I focused on just clearing portions of the hill at a time. Breaking it up into smaller sections. When my watch beeped at 7:15 I was pleased that I didn't let the hill slow me down too much. 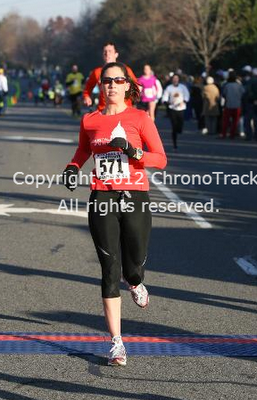 Onto mile three. I remembered last year when I nailed this mile in 6:42. I knew that wasn't realistic for me now, but I still wanted it to be my fastest mile, and I knew it could be. There was another small hill, and then a long straight away to the finish. I know many people say that looking at the Garmin too much is a bad idea, but it's very motivating for me. I glanced down and saw a 7:14 pace at one point during that mile and it truly motivated me to give more effort. I dug deep and pulled out a 7:05.  And then, all bets were off. I hit a 6:10 pace for that last 0.1 mile. Kind made me wish I started kicking it earlier, but nevertheless- that was some crazy speed at the end.

I was immediately happy with my performance in that I hit all my goals of finishing strong, running the hills well, and staying mentally focused. And, this was my 2nd fastest Turkey Trot ever! Did I run the best race I had in me today? I think so! Maybe could have shaved a few seconds off if a PR was on the line (just based on how strong my final kick was) but hindsight is 20/20! Ultimately, I ran very well and I did everything I set out to do.

It's encouraging for me to be getting my speed back after having spent the summer so sick. I think that the "old me" would be more focused on where I would be if I hadn't gotten mono. But I've fully accepted my illness and that it set me back a lot. It's given me the opportunity to realize that I can be happy and satisfied with my performances even when they aren't PRs.

Speaking of PRs, Greg got a new one-- 20:56. He broke 21 for the first time!!!! He was so casual about this race and didn't even want to get out of bed this morning. I am very happy for him. Now, we have two great performances to be thankful for and much, much more.
at 11:24 AM