As I mentioned in my previous post, Greg and I spent a long weekend up north. Having recently learned that I was recovering from mono, we tried our best to get the most out of this trip without overdoing it.

Buffalo
We started in Buffalo. My friend Todd, who I have known for over 10 years, was getting married. I was so happy for him! It doesn't seem like that long ago when we were both complaining to each other about being single and doing the online dating thing. It's just so hard to meet the right person! But when you do, the payoff is huge.

We flew in on Friday evening. The trip was off to a rocky start when we learned that there was no air conditioning on the plane. We sat there in the heat sweating bullets for at least 20 minutes before they told us to get off the plane. An hour later, we re-boarded and finally were on our way. After a quick shower, we were on our way to Bacchus Wine Bar and Restaurant. I enjoyed a beet salad followed by a delicious Mahi Mahi dish. I knew that beets were a super food and I was trying to give my immune system every advantage I could.

After Bacchus, we went to The Chocolate Bar, conveniently located inside our hotel. I took one look at the menu and was instantly obsessed. The Martini options were endless and unique: chocolate pretzel, sweedish fish, wedding cake. . . the list went on and on. There were so many fantastic looking desserts that I couldn't bear the thought of just choosing one. Eventually, I chose the brownie sundae with homemade dark chocolate ice cream and hot fudge. Yummy! One of the many things that sucks about mono is that I don't share desserts with Greg. This means I know exactly how much I ate and a little guilt creeps in. But it quickly passes when eating something so delicious.

The next morning, it was time for a long run. For Greg, that meant 14 miles. For me, it was 6 miles. We opted for the treadmill because we were running different distances and we weren't sure what routes there were in Buffalo. Greg was just killing it at 7.3 miles an hour, staying in his "easy" heart rate zone. I was steady at 6.2-6.3 (about 9:30 pace), keeping my heart rate in the easy zone and feeling pretty decent.

After the running, Greg took me on a drive through the University at Buffalo campus. He showed me all the places he used to live, and where he used to go to class. It was really cool thinking about Greg as a college student!

Afterwards, it was lunch at the Chocolate bar, where I had a flat bread with chicken, accompanied by a Salted Caramel Frozen Hot Chocolate. This drink was incredible!!! I know that frozen hot chocolate sounds like an oxymoron, but it was just like hot chocolate, only cold.

Afterwards I took a nap while Greg watched the Olympics. Naps were key during this trip! Then, it was off to the wedding. The ceremony was at 3:00 and the reception was at 6:00, so there was some downtime in between for me to take another nap or pseudo nap. The ceremony was beautiful and very well done. I just love this couple!

The reception was awesome. I refrained from dancing, with the exception of one slow dance with Greg. It of course reminded me of our wedding, which doesn't seem like that long ago. 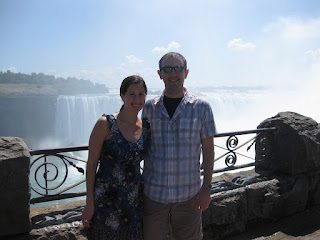 The next morning, we watched the women's Olympic Road Race and then hopped in the car for our trip to Niagara falls. Greg had been here a bunch of times in college, but I had never been. 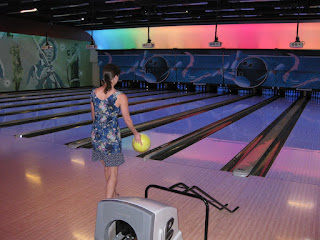 We walked into the "town" area which was like one big carnival. We had lunch there and then came upon an arcade/bowling alley. We decided to bowl a game. This is something we've never done together, so it was nice to have a "first". Greg bowled a 122 and I managed a 70. Bowling is a good recovering-from-mono sport because it doesn't require that much energy but it still gets you out and doing something!

We then hit up a candy shop where we procured some authentic Canadian Maple Nut fudge. This would be my between meals snack for the next few days. We walked past the falls again, bought some souvenirs, and then got back into the car.

Toronto
We didn't really have a game plan for Toronto. We mainly just wanted to check it out. When we arrived, we basically just wanted to relax at the hotel. We stayed at the Old Mill Inn and Spa, which was very nice. It wasn't in the downtown area, but it was on a metro stop in a nice area. We walked around the property, had dinner there and then fell asleep watching the Olympics.

It was interesting to get a Canadian commentator and hear the perspectives of the Canadians. We got to hear the human interest stories of the Canadian synchronized divers, who were essentially that country's heroes while we were there.

We slept horribly that night. Greg was too hot, which meant tossing and turning. That kept waking me up, and then I was up for awhile coughing, which kept Greg up. I also have a skin rash, which is apparently a side affect of mono, which was itching and keeping me awake. The result was that we slept in until 8:00. I don't think I've slept in until 8:00 in over 10 years. Probably not since just after college. Even sleeping in until 7:00 is pretty unheard of me. It threw our whole day off because we wanted to get our run over with early, but we made the best of it. I also managed to hurt my upper back by sleeping with my neck in an awkward position. Gosh, I am just a mess!

We couldn't have been more pleased with the running options. Toronto seems to be a very fit city with cycling paths and cyclists everywhere. Our hotel was situated on a trail that brought us right out to the waterfront. It was beautiful scenery and an interesting comparison to the Chicago Lakefront Trail I ran two weeks earlier.

Greg was kind enough to go slowly with me. Since we started at 9:00a.m., the sun was high in the sky and it was hot. We averaged a 9:51 pace for 7 miles, which was really discouraging for me. My pace on the Lakefront Trail had been around 9:25 for the same heart rate zone and 9 miles. Plus, it was even hotter in Chicago. I know recovery is not a straight line and I'll have my ups and downs, but it's just super frustrating for two weeks to have passed and I'm doing worse. Yes, I relapsed. Yes, it set me back. I have accepted it, but I do not like it.

Afterwards, I was exhausted. I probably overdid that run. I just felt really great for the first half, so I thought 7 miles would be doable. We ate breakfast and relaxed in our room for awhile, of course watching the Olympics. This was the worst I felt during the trip. The rest of the trip was pretty good, except for getting the occasional "I need to rest now" feeling.

Finally, we got in gear and headed out for the Toronto Zoo. This is a huge zoo with a wide variety of animals, but there was really just one type of animal I cared about-- the zebra! After paying a shocking $60 admission fee ($25 each plus $10 parking), we headed towards the zebras. It was hot and I knew my energy wouldn't last for long, so we didn't stop for long at any of the other animals.

Seeing the zebras was totally worth it! They are so cute and exotic. There are just no other animals that can even compare to this combination of cute and unique.

They don't let the visitors get too close to the zebras, so Greg really had use the zoom feature on his camera here. At first, they didn't do much of anything, but eventually they started playing around with each other and it was great to watch! If you really want to get close to a zebra, you need to go through a drive-through safari park. Ever since that trip, I've been spoiled with getting up close and personal with the zebras.

Of course we couldn't leave the zoo without taking home a new member of our family from the gift shop!

We drove back to our hotel, quickly changed and headed out to dinner in downtown Toronto. We went to a swanky place called Brassaii, recommended to us by the front desk staff. I enjoyed yet another beet salad which was good, but couldn't top what I had a Bacchus in Buffalo. My main course was a Halibut dish that was just spectacularly done.

Dinner took awhile, so we didn't really have time to explore Toronto afterwards. I was, of course, tired. We took a cab back to hotel and feel asleep pretty quickly.

The next day, we drove back to the states, and flew home to DCA. It was a quick trip, but we packed a lot into it. A precursor to our anniversary celebration in two weeks!