Lawyers Have Heart 10K - Steady As It Goes

This morning I ran my 8th consecutive Lawyers Have Heart 10K.

This race holds a special place in my heart because it was the first large race I ever ran, and it encouraged me to get into racing instead of just treadmill running. That said, this race is always so tough. Every year it's extremely hot and humid and it's usually too early in the summer for me to be properly acclimated.

This year, the weather was rather pleasant, with low humidity and temperatures in the low 70's. Even though this is amazingly good weather for this race, it's still hot and sunny, which I have to keep reminding myself when thinking about my time.

I organized a Capital Area Runners team, which only had six members on it. However, there were at least 10 people from our group running. I think most of them had signed up before I created the team or were running with their law firms' teams. I ended up being the only female, which mean my time would count as being in the top four of the team. As a co-ed team, they have to score at least one female.

Pre-Race
After seven years of doing this race, I know the drill pretty well. Get there an hour early so that there is time to park, walk to packet pickup and line up early for the porta potties. Go back to the car, put on bib, put shirt in car. I find it somewhat humorous that the race runs out of size small every single year. You would think they would learn! Every year I indicate "small" on my registration, but always end up with a medium. This year, I didn't even ask for a small. I took the medium and the volunteer informed me they were out of small. The shirt material is actually rather soft, and they make good nightshirts, so I'm actually okay with my collection of mediums.

After putting our bibs on, Greg and I warmed up for about a mile and a half.  I felt pretty good.

I didn't have a goal time in mind for this race, which worked both for me and against me. I had no idea how much the heat would affect me. Two weekends ago, I went out at a pace of 7:22 in a hot 5K, and I ran the last mile at 8:01. Clearly, I didn't adjust my starting pace enough for the heat. So I decided I would go out very conservatively and then try to maintain an even pace. It's good to not have a goal time because then you are focused more on the execution. But having no ballpark idea of the time I wanted to run also left me unmotivated to push to the extent that I was physically capable of. 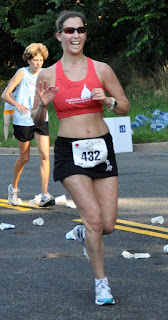 My goal with this mile was to take it super easy. I always, always bonk in this race and I was determined to not let that happen. It's really crowded and I didn't want to waste energy weaving and it's also uphill. I just took it very easy.

Miles 4 & 5-- 7:35, 7:34
I was so happy to be past the turnaround and feeling strong. Usually this is where it all falls apart for me, but I felt myself getting a little faster! I was so thankful to be maintaining my pace that I didn't dare try and speed up. In hindsight, I think I could have sped up a little and I think I was just being too intimidated by past experiences. I wanted to play it safe, and I did. I started making my grunting and screaming noises in mile 5, which means I was working hard, so I didn't question the effort level. A nice woman ran next to me for about half a mile and told me to relax and focus on breathing. It's funny how I always sound like death when I put out a hard effort, even when I am perfectly fine. I've been known to let out some yelps on the track, and particularly during pool running.

Mile 6: 7:34
The sun was beating down on me here and it got a lot harder, but this mile is a net downhill, so I used it to my advantage.  The last 0.2 is under a bridge, so I don't have Garmin data to support my perceived effort, but I would say I was doing a solid 6:15 pace. I was passing people left and right and now that I was in the shade, I felt awesome. I kept thinking "wow- I have a lot in the tank here, where was this earlier in the race?"

I must have had the math wrong in my head because as I was running, I was sure that a 7:35 pace would land me somewhere in the 46's, but I guess that first mile worked against me. And yes, my math was wrong. I used to obsess over which pace would get me to which time, but I have stopped doing that (thank God). So, I was a bit let down that I was in the 47's.

Nevertheless, I was proud that I ran a consistent race. I executed my strategy perfectly. This is the first time in Lawyers Have Heart history where I ran a negative split.

Sports Psychology
One of the things I am working on with my new sports psychologist is the post-race "review". We've identified that I am very black and white in my thinking and that unless I amaze myself with my performance, then I'm extremely upset. There isn't any middle ground. So for practice, here are all of the thoughts and feelings that occurred to me once I heard that some of my friends had set PRs, and others weren't that far off:

- I'm two minutes off of my PR. Nobody else is that far off, so the heat must have just affected me more.
- But could the heat really have affected me more? No. I just wimped out. I didn't push as hard as I could.
- 47:18. Sure would have been nice to get into the 46's.
- This is the best weather this race has ever had, and I still couldn't break 47?
- Other people PRed in this heat! I was so far off of mine. Boo!!!!!!!
- It was a mistake to start off so slowly. I should have had more confidence than that.

I know these feelings and thoughts don't get me anywhere. They are counterproductive and they don't build confidence. They serve no purpose and I am being unreasonably hard on myself.  My sports psychologist recommended a much more effective approach to post race "reviews".

50% of the review: What went well?
- I had a strategy
- I executed the strategy exactly as planned
- I beat my course PR by over two minutes
- I ran negative splits and didn't blow up-- which was one of the key goals
- I was in the top 5% of my age group, and this is a competitive race
- I kept a positive mindset while running the race
- I had a really nice final kick, passing most people
- I enjoyed it (as much as one can enjoy the pain of a 10K!)
- I ran the tangents
- I met my total weekly mileage goal by doing a warmup and cooldown.

20% of the review: What should I adjust for next time?
- Have a ballpark time goal, and know an approximate pace I want to run-- adjust that if necessary during the run.
- Don't let past performances affect my confidence for future ones.

And now the key is not view this is a "bad performance" and not let it feed negativity into other races. There were a lot of positive things that came out of today's race-- particularly in the area of strategy and execution. And a new course PR!  I am just a bit disappointed in my finish time and the fact that I let this race intimidate me. There are some good things to learn from here.

Finally, an important point that my sports psych makes is that once the review is over, move onto something else. Do not dwell on it all day. (Except I do get to write a blog!)