A Run Around The Corner

Greg and I have lived in our house for just over two years. For the past two years, we have noticed a 5K race very close to our house. While we were out for a normal weekend run, we would see hundreds of people in a 5K, running on part of our route. This year we decided we would join in on the fun.

I'm pretty sure this Angel Kisses 5K is the closest race to our house, with the start line about 2.5 miles away. About 35 minutes before the start, we left from our front door and did a warmup run to the start. It was just so cool to be able to run to the race! No worries about parking or traffic or anything. Easy as cake!

This race benefits cancer research and is in its 9th year. It's a very family-oriented race so a huge swarm of kids lined up at the very front. Normally this bugs me, but in a small family-oriented 5K, you just have to expect it. Plus, they go out really fast anyway, so you don't have to start weaving around them until about half a mile in, at which point they are pretty spread out.

I decided to do a few things differently with this race. The first was to not look at my Garmin at all. I tried this approach on New Year's eve and it did not work for me. I wound up going out way too fast on an uphill and was just trying to hold on the rest of the race. I got my slowest 5K time in years. I was a bit worried this would happen again (especially since this race starts on a huge uphill), but I wanted to work on just "feeling" the race and not having a watch dictate what I do. Also, knowing that I wouldn't be able to look at the Garmin at all, I wasn't worried about what the next lap pace would be because I wouldn't see it.

Also different was the use of my iPod. I haven't raced with music in about three years, so I decided to experiment with it. This goes along with my whole "feel the race" approach. I decided I would let the music carry me and I would get into a rhythm with it. The only problem I have with headphones is my own vanity. All varieties of earbuds and behind-the-ear headphones fall off of me, so I must wear the old school over-the-head ones. I have a super skinny pair, but still, it's not the most athletic looking thing. I decided I just needed to get over myself and wear them anyway.

In terms of a goal time, I didn't have one. It was on the warmer side, and I knew how hilly the course was. 100% hills! My primary goal was to run really strong, feel the race, and hopefully win an age group award.

Mile 1: 6:58
This was too fast, but not so much that it killed my race. The race starts on a long, steep uphill. All the kids were just gunning up the hill and I was trying to hold back, but without the Garmin, I didn't know if I needed to hold back even more. After the uphill was, of course, a downhill.

Mile 2: 7:17
More hills! There is no part of this course that is flat. The hills are long and steep in some places. I'm pretty sure this is the hilliest 5K I've ever run. I'm glad I wasn't looking at the Garmin because a 7:17 pace would have discouraged me. Even though I knew the course was hilly and it was warm, I would have let that number get into my head. Instead, I was free of it.

During this mile, I was side-by-side with a girl who was about 11. I enjoyed running with her, but kids don't really understand racing etiquette. Periodically, she would try to get ahead of me, and run right in front of my path. I had to dodge her multiple times. She'd get right in my way, I'd have to go around her. I'd be slightly ahead, and then she'd come up and cut me off again. I don't think she was trying to be rude, but maybe she thought that's what people did in races. It is a competitive thing, after all.

Mile 3: 7:18
This was so hard. I knew my effort level was at my max because I was constantly letting out my screaming sounds. In the Crystal Run 5K in April, I didn't let out many screams, and that's how I know that I wasn't giving it everything I had. In this run, I was just sighing and screaming and grunting throughout the entire last mile. I passed the 11-year old for good, but then came across a girl who looked to be around 12. I passed her on the final uphill, thinking I was in the clear, but then she passed me again, and I sped up. I did not want this girl to beat me!

Once we got to the top of the hill, the last 0.3 miles were all downhill, and that's when I just let it rip. I accelerated down to the 6:30's and ended up beating her by about 10 seconds.

Last 0.14: 6:10 pace
I really like the downhill finish to this race and the fact that you can see the finish line balloons from a ways off. I gave a really strong final kick to finish in 22:24.


Although my time is nearly a minute slower than my PR, I was very happy with this race. My effort level exceeded what I did at Crystal City, and if I had pushed this hard back then, I would have been much closer to my PR. When I crossed the finish line, it took me over a full minute to be able to talk to anyone. 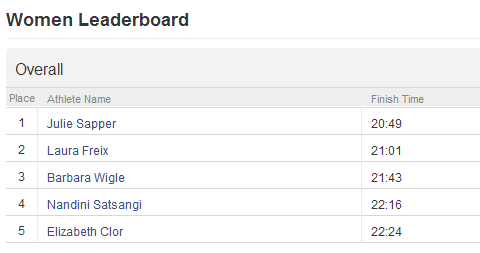 I also have to mention that the 4th place female was only 10 years old. That kid was on fire! She had actually come all the way from Maryland to run this one. She killed all the boys her age, too. The fastest boy in her age group was a 9-year-old at 23:49.

Loot in hand, Greg and I ran back home. We plan on making this race a yearly tradition. 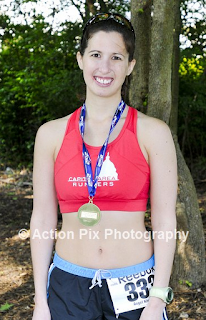