I've written quite a few posts lately about my growth and change as a runner over the past few years. It's been a fantastic journey and even though I am stronger now (both mentally and physically) than I ever have been in the past, I would love to race a marathon that felt as awesome as Shamrock 2008.

Exactly four years ago I ran the best marathon of my life. Here's how I did it.


I ran the Shamrock Marathon yesterday morning in Virginia Beach.

The Start Line
I was optimistic as I approached the starting area. The winds didn’t seem to be as heavy as forecasted. I was expecting constant winds of 20 mph, but it was more of an occasional breeze, at least at the start line. It also wasn’t as cold as I had expected.

As I was walking around the start area, a photographer asked to interview me for his TV newscast. He asked me about my marathon experience, and my expectations for this race. I basically said that there were a lot of unknowns due to the wind, but that I was prepared and ready.

Miles 1-6
I started the marathon at a pace that felt relaxed and comfortable. Starting at mile 2, my shin began to hurt. I tried not to panic. I tried to ignore it. I was not about to let this muscle strain affect my running. I held steady. At around mile 3, I realized I was running around the 3:50 pace group. I was running a bit faster than them, though, and passed them after about half a mile. I wasn’t going for a sub-3:50, but I figured I would try to stay ahead of them for as long as possible, in case there was any shot of a 3:49. By mile 4, my shin stopped hurting. Or, I stopped noticing it. There was a timing mat at mile six, and my split was 52:46, for an average pace of 8:48 for the first six miles.


Miles 7-13
I started to feel really good, and I started to have hope that maybe I would run a good race and PR. A stretch goal was sub-3:50, because the 3:50 pace group still had not passed me by mile 13. There was a two-mile stretch on the boardwalk where the wind was just awful. There were headwinds at probably 15-25 mph (my estimate) and I tried drafting off of other runners. It helped, but then the person would either speed up, or I would want to go faster than the person I was drafting off of. I reached the half marathon marker in 1:54:50, averaging a pace of 8:46 for these miles.


Miles 14-20
Just before mile 14, the crowd thickened. I found it hard to maintain a pace because the course had gotten really thin, with only room for 4 people across. I realized that it thickened because the 3:50 pace group had caught up with me, and it was a large group. The winds were still heavy from mile 13-17, so I used this to my advantage to draft off of these runners. The problem with running in such a tight pack was the water stations and being able to get water when I needed it. I hit the mile 18 timing mat at 2:37:42, for an average pace of 8:46. Things started to hurt at mile 16, and I started to worry a little. Usually in a marathon, nothing bothers me that much until mile 20 or even mile 21. I wondered how I would make it 10 more miles, but I quickly stopped that line of thinking. It’s much easier to take the race mile by mile. Just focus on getting to the next mile marker.


The 3:50 pace leader was amazing. He kept encouraging me and helping me along the way. He was entertaining and got my mind off the race.


Miles 21-26
I reached the 20 mile marker in 2:55. This was about 5 minutes faster than Richmond. I told myself that if I stayed on pace, I could get a 5 minute PR or even better. I started to fade. As I approached mile 21, the 3:50 pace group started to get ahead of me. I could still see the 3:50 flag in the distance, but I was no longer with the pack, and I was running alone. 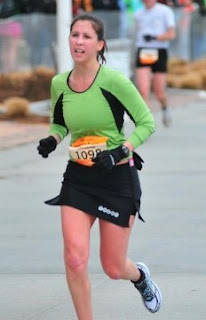 I came up with two new mind games on the spot. The first one was to visualize the mile marker pulling me toward it. I thought "the mile marker wants to get me. The mile marker needs me! I have to get to it! It’s tugging at me!" And that really helped as I convinced myself not to stop running in my pursuit of marker 23, 24, and 25.


It was tough. I had to dig really, really deep. Another thing that I started telling myself was that this pain was temporary. It wouldn’t last long. The race glory would last forever, but this pain and this situation was very, very temporary. And if I stopped, it would only prolong it. So, I just kept repeating to myself over and over "temporary. temporary. temporary." And it really helped! I persevered. I allowed myself to slow down a little bit, but I would not let myself walk. At this point, it was mainly just a mental struggle of stopping versus continuing. My legs were killing me!


The last 0.2This was the best part of the race. This is where I surprised myself and became my strongest racer. Maybe ever. I looked down at my watch as I passed the mile 26 marker and looked ahead at the finish. I told myself if I picked up the pace, I could sneak in under 3:52. I said "Your job, is to get to that finish line before your watch reads 3:52. Go for it now!" 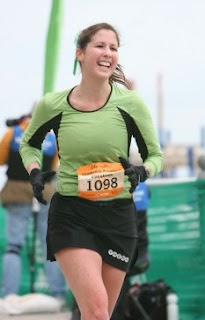 Out of all of the races I have ever run in my life, I would have to say that my final sprint for the last 0.2 was the toughest effort I have ever put out. I was in so much pain, and I didn’t think I could go any further, but I told myself that I had to get in under 3:52, and I did so comfortably.


I have now set a personal record in each of my six marathons.