I know we've been spoiled in the Washington DC metro area with seasonably warmer than usual temperatures for most days and very little snow. While some folks love the fluffy white stuff, I hate it. I run in the dark before work, so I am not able to spot icy patches and I am not able to see the ground I am running on. Yeah, I know, I could get a head lamp. But I don't.

Thankfully, the weather hasn't yet caused me to take it to the treadmill, but I fully intend on using a combination of pool running/treadmill/elliptical if I think it's too icy to run outside. I think that too much treadmill running was the culprit behind my stress fractures last winter, so I wouldn't attempt to replace all my mileage with treadmill mileage.

As for the cold, there has only been one morning that was brutal, with a temperature of around 13 degrees. Otherwise, the temperatures have been in the mid 20's at their worst, with the wind chill often knocking them down into the teens.

The biggest challenge in cold runs is my hands. Last January, I posted about the Little Hotties hand warmers I put in my gloves. However, they don't work well in traditional gloves. And the lack of air when put in mittens actually makes my hands hot and sweaty. So how do you best use these little nuggets of warmth?

The hotties need to be on your fingers, so my friend Cristina turned me on to the hybrid glove/mitten, which allows you to put the hotties in the mitten part, while still having access to your fingers if need be. I bought a pair of Brooks Wanganui Cabrio Mittens which are made of a heavier/fleecier material than other hybrids. They have been working great, but the only drawback is they come in either small/medium or medium/large, unisex. The small/medium size is too big for me, but I make it work anyway buy stuffing my sleeves into the base of the glove.

Another benefit of these gloves is that unlike regular mittens, you have quick access to your fingers for taking gels.

When it's really cold out, I end up using two pairs of hotties (4 total) one for the fronts of my fingers and the other for the backs. The lone thumb ends up getting cold, so I have to periodically insert it into the mitten area so it can share in the warmth.

As you may be able to deduct from reading this post, I have, in fact, been running again. I'm finally over my cold and my calf has been behaving. Here's a recap of my workouts since I last posted.

Monday, January 9: 4 miles of pool running + 500m swim. A fairly short swim for me, but I was feeling really worn down due to the lingering cold. I was really dragging the rest of the day

Friday, January 13: 6.5 miles total, including 5 x 800m on the track, with 400m recoveries. I was pleased with my paces. If I were going to do any more than five of them, I would have slowed my pace a bit. 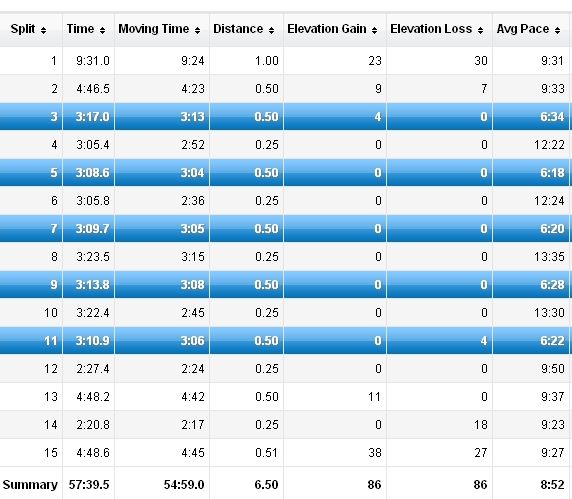 Sunday, January 15: 16-mile run with my husband (well, he actually did 18 and we parted ways at mile 12). Cold and windy with a "real feel" of 16 degrees. Slow start, fast finish. Average 8:49. This run felt great at the end and I felt as if I could have gone farther/faster, but I didn't want to push it.

These workouts were out of sync with what the rest of my team is doing. They are doing hills instead of intervals, but considering this is my first week being "back" and probably the last week they are doing hills, I didn't think doing just one hill workout over the course of a training cycle would help me, so I got a head start on the intervals. We typically do intervals on Tuesday and Tempo on a Friday, but I reversed them because I wanted to prioritize the tempo run over the intervals. I didn't want the intervals to wear me out to the extent that I couldn't execute a good tempo.

So the week wasn't in line with the schedule I'm trying to be on (that of my teammates) but it worked for me.

I'm definitely more optimistic today than I was when I last posted. However, I know that there will be more obstacles to come in my training. I have a vacation coming up, followed by two business trips in February. I'm planning to do just two 20-milers instead of my usual three, but I keep reminding myself that my best marathon ever was run with just one 20-miler under my belt.
at 2:15 PM