And you thought I forgot! This post is a continuation of Part I and Part II of the controversial blog series, addressing topics that are often debated among runners. In the previous posts, I addressed headphones, barefoot running, junk miles, unauthorized bib transfers, BQ qualifying times, and weather-related race shutdowns. Here are a few more. 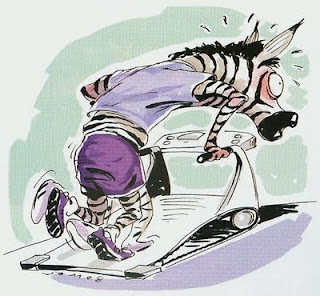 My Personal Preference: I "grew up" running on a treadmill. I was a gym rat and that's how I got into running. Back in 2001, there were no iPods, so in order to listen to my music I needed to be able to rest my portable CD player on something. There were also no Garmins back then and I wanted to know my pace and distance. It wasn't until 2005 that I started running outside regularly, and even then it was only on the weekends. The more I ran outside, the more I loved it, so I gradually made the transition. Until April of 2010, I still did most of my Monday-Friday runs on a treadmill because they were doing so much construction in my area. There was no safe place to run. Sometimes I would drive to the trail, but that wasn't lit so I could only do it for three months out of the year. Fortunately my husband (fiance at the time) would go with me on the weekdays sometimes which would make it safer to run in the dark. When I moved into a residential neighborhood in April 2010, 100% of my runs were outdoors and I loved it! However, when all the snow and ice fell in December and January, I didn't think it would be safe to run on dark icy roads, so back to the treadmill I went. There was a two-week period when I did all of my runs on the treadmill and BOOM! Three stress fractures. Thankfully now I'm back to 100% outdoor running.

My Stance: I improved my race times quite a bit from 2005-2009 so the treadmill is definitely effective. But would I have seen even more gains had I not used the treadmill as much? I think that the treadmill is a great tool for parents who can't leave the house or for people who don't have access to a safe running area. It's great for business trips and when the roads get icy. However, I think that treadmill use should be minimized and that the workout will be stronger outdoors. It more closely simulates race conditions and unless you are on a track, the surface probably won't be completely flat. After my stress fractures, I am more anti-treadmill than I used to be and I think that during the winter I will limit the treadmill to just 1-2 times per week and go pool running if conditions are not run-able. I don't mind running in cold weather, but I won't run outdoors if there is snow and ice on the ground and it's dark (which it always is because I'm a morning runner). Also, I don't think the treadmill is boring. Yes, it's more boring than outdoors, but with a good music playlist I can totally combat the boredom factor. 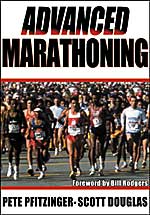 Marathon Pacing
The Debate: Should you pace your marathon evenly, or try to aim for a negative split (start slow, finish fast)? According to Pfitzinger and Douglas, in the book Advanced Marathoning, "relatively even pacing is the optimal pace strategy." They continue, "If you ran negative splits for the marathon, chances are that you ran more slowly than optimally during the first half of the race and could have had a faster finishing time." They indicate that you should plan for a 2-3% slowdown in the second half due to physiological factors that I won't get into here. On the other side of the fence, negative splits ensures a strong finish and that you aren't bonking. If you start slowly, you can really give it everything you have in the last 10K and you aren't leaving anything on the course.


My Personal Preference: I plan on starting about 20 seconds per mile slower than goal pace in my next marathon. I've bonked far too many times (not solely because I've gone out too fast, but a slower start would have been helpful in all of those cases). I negative split 3 of my first 4 marathons before I had the confidence that I could really run faster and they were all wonderful experiences. I probably could have done them slightly faster, but I was happy that each race was a PR. My best marathon ever (Shamrock 2008) was run in the way that Pfitzinger and Douglas recommend: 1:54:40 first half and 1:56:59 second half for a 3:51:49. I had a two-minute negative split and I surpassed my goal by about three minutes. I ran a similar race at Richmond in 2007 with 1:56:55 for the first half and 1:59:46 for the second, yielding my first sub-4:00 marathon. Given that my two best marathons (not my two fastest, but my two best) had relatively even pacing strategies, it's going to be tough for me to abandon that. But my fear of bonking overrides it, so I plan to go out slowly at the next one.

My Stance: It really depends on how experienced you are. For first, second and even third timers, I really think the start slow, finish fast approach is best. If you're an elite or a very experienced marathoner, the even pacing does make more sense physiologically. You shouldn't feel "good" at the end of a marathon, but if you are able to significantly reduce your speed in the last 10K then you might have left something on the course. Both my husband and I agree that he could have run Shamrock faster, but he was happy with his time and he was happy that he had enough gas in the tank to really hammer those last six miles home.

"Take What the Day Gives You"
The Debate: If you're registered for a race, do you DNS (Did Not Start) or DNF (Did Not Finish) because of race day conditions-- usually the weather? I've heard many runners say that once they've registered for something they are committed to it no matter what. Nothing will stop them from getting to the start line, and of course the finish line. Other runners assess how they are feeling that week (or even on race morning), take the weather into consideration and may decide to not race something they or registered for. Or if they are feeling like it's not "their day" mid-race, drop out and DNF. The first group would be mortified by these two acts.

My Personal Preference: I'll take what the day gives me weather-wise if it's not an "A" race. And I have no shame in DNFing when it just doesn't feel right. I've done that twice and haven't regretted my decisions. There have been races that I wished I DNFed because the recovery from them was so brutal and my time was awful anyway. I wrote a blog post on this back in 2010 after I dropped out of Shamrock at mile 13.

My Stance: Think big picture. You've already spent the money on the race so that's not going to change. Why risk injuring yourself when you have a nagging pain or wasting your fantastic training cycle on a 75-degree day? There will always be other races. Don't get married to any particular race because it's what you registered for. It's more important to keep your "A" goals in mind and stay healthy. Sometimes it's just not your day. If your marathon is supposed to be abnormally hot (like Chicago 2007) then save it for a better day. Don't get me wrong-- it sucks because you've tapered, you may have already purchased airfare, and now you'll have to train for another marathon several weeks later. It's not ideal, but it's better than wasting all that hard work.

This concludes my controversial blog series. I hope you enjoyed it. I'm sure I'll be tackling other controversial matters on this blog as I experience them. Please weigh in on these topics by posting a comment!