Irish I Was Running

This morning was the Shamrock marathon. I was supposed to run it but was injured so my role was to support Greg.

Pity Party
I'm going to get my negative feelings out of the way first, so that I can focus on the wonderful time I had today.

I was depressed yesterday. As much as I was trying to be supportive and excited for my husband, Greg, it was so hard to just push my feelings aside. Yesterday was tough for me for two reasons: 1) It marked the 3-year anniversary of my last "good" marathon experience. 2) The forecast for the race was in the mid 40's and sunny.

Regarding #1, I was depressed because I realized that the last time I ran a marathon that I considered to be a non-failure was exactly three years ago at Shamrock 2008. Ever since then I have been living and breathing marathon training and yet things haven't come together for me. Injuries, illnesses, weather, whatever the case-- I have just haven't been able to make it happen.

Regarding #2, I was glad that Greg was getting ideal race weather, but I kept thinking, "Where was this weather last year? Last year I was in such great shape and I was at my peak and ready to run a sub 3:40, but it was so hot that I dropped out at mile 13 because I felt so horrible. It was 25 degrees hotter last year and unseasonably so. Now that am I injured, the weather is perfect. If I had just had this weather last year, I would have a solid marathon under my belt and this injury wouldn't be so difficult."

I Got Over It.
I did allow myself to be upset on Saturday at the Expo, but I knew that this was an important 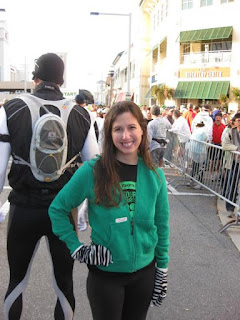 weekend for Greg and I wanted to be happy for him. So I shoved my feelings aside and focused on being able to support him.

On race morning, I accompanied Greg to the start line. I stayed next to him in the corral for as long as I could before the corral started to move forward.

I wished him good luck, gave him one final hug and he was off. I walked briskly to the start line and when he crossed, I started my Timex watch. I wanted to know exactly when he started so I could know exactly when to expect to see him. And during the last few miles, I could tell him what time he was on track for.

The First Half
My plan was to meet Greg just after the halfway point, at mile 13.5. I told him exactly where I would be. This gave me enough time to go back to the hotel, use my bone stimulator (I'm still using it twice a day) and get changed into running clothes.

I had been debating about wearing my bib. At the start line, the announcer said that your bib must be displayed, or you wouldn't be able to cross the finish line. So I figured I should wear my bib and that way no one would question me running or taking water if I needed it. But I also didn't want people to think I was cheating, so I took a black Shapie and drew a big X over the entire big and wrote DNS. Even still, when people saw me on the sidelines with my bib, they asked me if I was hurt or was cramping, etc. (You can't really see the X in this photo, but it was there!)

I wore a shirt that said "Irish I was running" which was extremely appropriate for the occasion. I got it from volunteering at the Pacer's Four Courts Four Miler last weekend. It was so perfect!

Mile 13.4-15
My first stop was at 44th street, just after the halfway point. I waited there for about 20 minutes and enjoyed cheering on the runners. Everyone's names were printed on their bibs so I was able to cheer for people by name, which most seemed to really like. 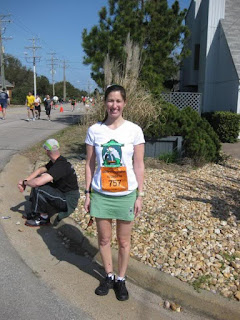 Greg's plan was to go out at a 9:00 pace and then speed up at the halfway point if he felt good. So I expected to see him just after 2:00, and that's exactly when I saw him. I handed him a bottle of Gatorade and two gels, like we had talked about. Both Greg and me like to carry water bottles when we run, at least for the first half, because we don't have to stop, and you get more water in you and less all over your face.

I ran with him for 1.6 miles and our pace was 8:53. He was following his plan perfectly-- speeding up just a little after the halfway point because he felt good. During this time my stress fracture didn't hurt at all but oddly enough, I felt something in the LEFT shin. My bone scan did show a stress fracture on the left side, but I had never felt anything there. And it was really surprising to me that all of a sudden it would start to hurt. I didn't mention anything to Greg because I just wanted to offer words of support to him.

Miles 23-Finish
I expected to see Greg at around 3:30 but much to my excitement, he arrived a few minutes early, at about 3:27. He looked strong and said "we're gonna kill this!" or something to that affect. I didn't even have a chance to start my Garmin right away (I logged these as two separate runs). He said "this is just a race now!" I looked down at my Garmin, which I did eventually start, and noticed that we were in the 7:40's!  What a change from NYC when we were walking most of mile 23. I was so happy that he was feeling so strong.

I was also happy that I was running a 7:45 pace and still feeling conversational. I definitely felt like I could have maintained it for the rest of the race, although my leg might not be happy about it. He slowed us down a little for the next mile, but we were still running at a very good clip and passing lots of runners.

I took this video during the last mile. We were just about to turn onto the Boardwalk and head for the finish.

We sprinted pass tons of people at a 6:47 pace and had a great finish. Greg's time was 3:52:26, which is faster than he expected. He said that he thinks this is because he didn't have a goal. He ran the first half very conservatively and then gave it all he had at the end. First half was 1:59 and second half was 1:53. He said that he hated bonking in NYC so much and that he vowed it wouldn't happen again. I really like his approach and I think that if I ever run a marathon again, I am not going to have a time goal. I will run by feel and keep my heart rate low in the early miles.

My shins were pain-free during those last 3.2 miles, and I haven't had any pain since. I was really nervous running that sprint at the end, but my shins handled it just fine.

I am so proud of my husband. I really enjoyed running with him and supporting him on his special day! I couldn't have done that if I ran my own race.
at 7:58 PM