Tomorrow, Valentine's day, will be the six-month anniversary of the day I married the most wonderful man in the world. We will have been married for exactly half a year, and I have loved every minute of it, more than I could have ever expected.

How We Met
Greg and I met online, on a free site called "Plenty of Fish" in March of 2009. I had tried online dating multiple times in the past and had no luck. I was highly discouraged and cynical, but yet I joined Plenty of Fish just to see what was out in the "sea" so to speak. Greg's profile was one of the first that came up in my search. What prompted me to e-mail him was that he had a photo of himself crossing the finish line of a race.

I wasn't looking to specifically date a runner, but I knew I needed someone who would be understanding and supportive of my obsession passion. I enjoyed running by myself so I wasn't looking for a running partner, but rather a partner who ran. I sent Greg a short introductory message in which I asked him more about his photo and told him that I ran races frequently. He replied back with a thoughtful response, and so the exchange began.

Greg and I emailed back and forth for about six weeks until we finally met in person. Mainly due to his hectic work schedule and a two-week business trip to Spain. Our first date was at Tallula in Arlington. A good portion of our conversation revolved around running. He had run three previous races: a sprint triathlon, a 5K and the Fairfax Four Miler in 2008. I had also run the four miler just 4 months prior to the date, but of course we didn't know each other then. He was registered for the Army Ten Miler, which would be the longest distance he had ever run.

So even though he was relatively new to running, I could tell he was interested in serious training, versus just simply showing up to races. At that point, he was running about 4-5 miles at a time at a sub-10:00 pace on a treadmill. I respected the fact that he was using a heart rate monitor to keep the effort easy and build endurance as opposed to killing himself on each run, which is what many runners do (including myself, before I knew much about the proper way to train). We had a very technical discussion about running and seemed genuinely interested in what I had to say about heart rate training. My fear was that he was going to perceive me too much as a running "coach" and not enough as a woman he wanted to date.

The next morning, I completed a 21-mile training run. Greg called me that evening and asked me how the run went. I told him about it and we talked for about 15 minutes. But he didn't ask me out again! The furthered my fear that he might only be interested in my running guidance and not as a romantic partner. We did end up having a second date, of course. I continued to offer Greg training advice but the relationship progressed on a romantic level as well and before I knew it I had an official boyfriend!

Our Races
I wrote Greg a training plan for the Army 10-miler and included some races in it to prepare him. The first of these was the Lawyers Have Heart 10K, which would be the furthest distance he ever raced. This was our first race together and it was nice to have someone to go to the race with. As an out and back course, I got to see him after the turnaround, at which point he yelled out to me "You're Beautiful!" Greg finished in a respectable 54:xx, a time that he would slaughter the following year by 8 minutes.

Greg continued to impress me with how consistently he kept to the training plan I gave him. Over the summer, we started to run together. I often had about twice his mileage, so he would do the first half of my runs with me. For my long runs, it was nice to have companionship for the first half, but then also to have the solitude that I was used to for the second half. Prior to dating Greg, I wouldn't run on the W&OD trail until it got light enough out for me to see. But with Greg by my side, I felt much safer so we ran in the dark. This meant less time on the treadmill and more time outside.

Greg aced the Army Ten Miler with a time of 1:22:xx, surpassing the original goal of 1:25 that we decided upon when I created the training program. Since then, he's been setting PRs left and right! (Unfortunately, I couldn't be there with him at the Army Ten Miler, as I was in Texas on a business trip.) In 2010, he ran the Army Ten miler in 1:14:00. Wow! Just Married!
A few days before Thanksgiving, Greg proposed to me. I was elated! I was so excited that I didn't sleep at all for the next few nights, which caused me to run a sub-par Turkey Trot. But I was so excited about being married to him that I didn't even care. We decided to get married the following August, and since running was such a major part of our relationship and what attracted us to each other, we incorporated it into the wedding. We used bib numbers from races as our table numbers.

Greg and I typically keep the same race schedule, but we always run our own races. The one exception was the NYC Marathon, which was his first. I wanted to be there with him when he finished, and the logistics of trying to find him afterwards would have been a nightmare. It was a tough race for Greg and I feel partially responsible for making us go out too fast and not respecting the challenging course. But it was a lot of fun running with him, and NYC was something I had always wanted to do for fun, not for a PR.

People often ask us if we are competitive with each other, especially those who know that I am very competitive by nature. The answer is always no for several reasons. First of all, men are naturally faster, so me running a 22-minute 5K is not the same as him running a 22-minute 5K. Secondly, he's much newer to running than I am. Last year, almost every race he ran was a PR, and that just doesn't happen once you have a few years behind you. He's making gains at a much more rapid rate than I am, which is to be expected.

Sometimes he compares the percentile that he finishes in with the percentile that I finish in, and says that he has a long way to go to reach my level. If that motivates him, then it's fine with me! I just don't want the day to come when he's too fast to do long runs with me. But he says he will always do them with me.

This morning was the "Love The Run You're With" 5K. Greg and I signed up to run it as a team. We were secretly hoping to win a team award, but due to my stress fractures, we both sat the race out. My prediction for him was a 21:25, and a 21:55 for myself. Not sure if that would have gotten us anything, and frankly I don't want to know!  I wish there were more races out there with two-person teams. Hopefully next year we'll be able to run it. Last year, it was rescheduled because of the snow and the new date didn't work for us.

And so, on our last day of the first half of the first year of our marriage, I wanted to reflect on how happy I am to be married to Greg. He's amazing in every way! 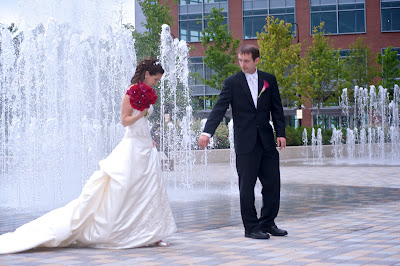