The only benefit of having stomach pains kill your marathon and walking the last four miles is that you recover faster than if you had expended all of your effort. As a result, I was able to run a record 24 miles in the week following the St. Jude Memphis marathon, and that number would have been higher if I hadn't taken a trip to Albuquerque, New Mexico. (By the way, I posted photos of my painful finish in the St. Jude Marathon blog entry.)

Altitude
The Wednesday following the St. Jude marathon, my husband Greg and I flew out to New Mexico to visit his parents. This was my first time in Albuquerque, so I wasn't sure what to expect. His parents live on the top of a large hill, so the only option is running up and down a two-mile long hill. I thought this would be a great hill workout, but the 7,200 ft, altitude made it nearly impossible for me to run. As soon as we started running, I had a burning sensation in my throat. I did feel abnormally winded for the pace we were going, but the limiting factor was this painful burning in my throat. We ran half a mile out, turned around for the other half and called it a day after just one mile.

The next day, Greg's mother drove us to a running trail that was at about 5,200 ft. elevation and that was more flat. This was a beautiful run. The mountains were amazing and it was exciting to be running somewhere new. As we got moving, I thought it was really easy. I had no more burning in my throat and our pace was decent. We knew that we would slow down when we turned around because it was a very long, steady decline on the way out. After two easy miles we turned around and things changed dramatically. Not only were we going up hill, but we were running directly into the wind. We hadn't realized how windy it was when the wind was at our backs. After one mile of this uphill into the wind I was exhausted. But we kept going and finished back where we started. 4 miles, 9:19 pace.

Treadmill
When we returned home, we were disappointed to find that it was going to be unseasonably cold and windy all week, with the "real feel" in the single digits in the mornings. I was fully prepared to spend all of December running outside, expecting it to be in the 20's in the mornings. But we've been having weather that's more typical of January and February so I finally broke down and decided to go to the gym.

Before I moved into my house back in April, I did most of my runs on the treadmill. There was nowhere safe to run in my area because there was construction everywhere. When we moved into our house, I didn't even get a gym membership, because there were plenty of safe places to run. At the end of November, we finally got gym memberships, but I was hoping to use it very sparingly. But for the past week, all of my runs have been on the treadmill.

I have two main objections to the treadmill. Yes, it's boring, but I can live with that. The first is the temperature of the gym and lack of fresh air. This gym is about 70 degrees and unlike my previous gym, the treadmills don't have their own personal fans. I overheat easily so my workouts have to be slower and I don't think they are as effective. The other objection is that there isn't any variation of terrain. I know I could use the incline, but that feels completely un-natural to me and I've had friends who have gotten injured that way. So I keep it flat. Staying at a constant pace on a constant flat surface really tires my legs, so I feel like I can't run for as long as I'm more prone to injury. I do occasionally throw fast strides in, or put the incline up for a minute or so, but that's still not enough.

Unfortunately, there is no end in site to the treadmill. All of the paths I run on are now covered in ice and snow and since I run in the morning when it's dark, that's not at all safe. I really hope the stuff melts and doesn't come back for awhile, but the forecast isn't on my side. So treadmill it is.

Lifetime Fitness Reindeer Run 5K
I signed up for a 5K race at the last minute. One of my friends just completed "Couch to 5K" and she chose this race as her 5K. The race was only two miles from my house, so I just couldn't turn down the opportunity. Another reason why I wanted to run this race was to get a non-treadmill speed workout in. The roads are dry and free of snow and ice, but my paths are not, so this was an opportunity to run on the road. Greg decided not to run this one because my company's holiday party was the night before and he didn't want to have to think about racing the next day. I'm not a big drinker and I didn't care too much about my time, so the holiday party wasn't a big factor for me.

I would have liked to PR at this race, but given that I haven't been doing much speed recently, and I 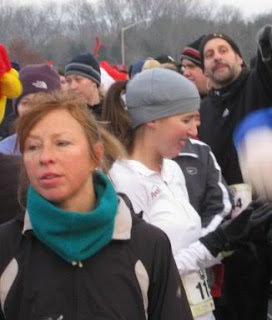 just ran Memphis two weeks prior, I thought that might be a long shot. It was 18 degrees out, but there was very little wind, which made it tolerable. I wore my CW-X tights, my red snowflake skirt, a lightweight hat, white singlet base layer and Pacers long-sleeve half zip. I held "hotties" hand warmers in my hands, and put gloves over my hands like mittens. Using gloves like regular gloves doesn't keep my fingers warm enough. I only warmed up for one mile and then headed to the start area.

There was no chip timing so I put myself closer to the start line than I might otherwise have. The race director said "go" without giving us a warning or count down or anything so it was an abrupt start. I ran the first mile in 7:09 and was feeling great. The next mile had a long gradual incline, so I slowed to 7:18. After that hill, I never quite recovered to where I was on the first mile, so the third mile ended up being a 7:16.

This race did not do a good job of enforcing the cones. There were actually cars driving right next to the runners and you had to watch out for them. This didn't affect me as much as it did some other people. I was chatting with the female winner afterwards and she said that towards the end of the race, people were yelling at her to move out of the way of the cars! There were also two hairpin turns during the last 0.1 of the race, which killed my final sprint. Both of them were icy, so you had to be really careful about it. I think I lost 2-3 seconds because of those. There was no finish line timing mat, so it was difficult to tell where the finish line really was, but I think I crossed it at 22:37 according to the clock. Official results have not been posted online yet (and yes, it's been over 24 hours since the race). There were no age group awards-- just awards for the top 5 men and top 5 women.

When I walked into the high school cafeteria where the food was, someone came up to me and asked me what place I finished in. I said I didn't know, and Greg said he counted 4-5 women ahead of me. She got my name and wrote down my address because I might have won an award. This struck me as extremely poor organization. Were they just hoping to catch all the winners in the food area afterwards to find out who placed when? And shouldn't they already have my address from my registration?

We stayed for a little while and learned that I didn't get 5th place, so I was probably 6th. Darn it-- just one away from an award! But I did pass about three women during the last mile, so I was happy about that. And no one passed me during the last mile. Definitely a strong race, a good speed workout, and a chance to see my friend in her first 5K. Afterwards, Greg and I went to the gym to run 11 miles on the treadmill. I was already dressed in my winter running gear, but there was just nowhere safe to run with all the paths being snowy. They never even plowed our neighborhoods. Most neighborhoods around us weren't plowed.

My training plan for the Shamrock Marathon officially starts tomorrow. I hope I won't be stuck on the treadmill for most of it!
at 11:16 AM