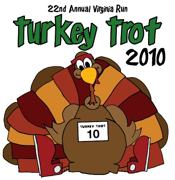 I ran the Virginia Run Turkey Trot 5K this morning. It was my 5th consecutive year at this race. Here is a recap of previous races:

So, there hadn't been much improvement over the four years of doing this race and I was getting frustrated with the 5K distance. But then in April of this year, I set a massive PR in 22:21, so it made up for everything.

Going into this morning's race, I was pretty laid back. I'm just coming off or the NYC marathon, so I am not 100% recovered. I haven't done any speedwork since the marathon, and my last "fast" run was the Army 10-miler, over a month ago. I didn't think I'd be able to PR, or even come close, so I decided to play it conservatively.

The weather was about 40 degrees and overcast. I was wearing a short-sleeved shirt, tights and a running skirt. I probably could have done without the tights, but I never feel like they slow me down. My plan was to go out at a pace of 7:20 and then try to see if I could push harder. I was thinking I would be happy with a 7:20 average. Greg and I did a 1.4 mile warmup and then found ourselves in the starting area. It was shorter than we had planned, but there were so many people mulling around that there was no clear path to run through.

Mile 1: 7:19
There was a great deal of weaving this mile, which I expected. But there was no way to avoid it. Even though I started fairly close to the start line, this is a family race with a lot of children who like to be at the front, 2300 runners total. Because of the weaving, I expected that this would be the slowest mile. In terms of elevation, it was gently rolling hills. Greg passed me about 1/3 of the way into the mile.

Mile 2: 7:19
There are two significant hills in this mile, so even though I ran it at the same pace as the first mile, I put in greater effort here. I eased up on the uphills and flew on the downhills. I told myself that even if I averaged a 7:19, it would be a huge course PR and a time I'd be happy with.

Mile 3: 7:07
I decided to give it all I had in the final mile. I was back to the gently rolling hills and I told myself that I could tolerate the pain for just one more mile. It still didn't hurt as much as it had in previous 5Ks, so I didn't think I was running at full effort, but I still pushed really hard. I think that in previous 5Ks, I had gone out faster than I should have so I was bonking at this point. However, I felt really strong during this last mile, due to a conservative start.

Last 0.1: 6:25 pace
I told myself that I run intervals on the track that are much longer than this 0.1, so I was going to push hard. I did push, and I ran faster than my interval pace (typically 6:35). The guy who I was trying to beat (a friend of mine who beats me every year at this race) finished about 4 seconds ahead of me. I just couldn't catch him!

My official time was 22:33 (7:16 pace). This is faster than I expected, and according to McMillian, predicts a 3:40 marathon. My recent half marathon and 10-miler time predict well under 3:40, so this was a relatively "slower" race. But considering that I don't think I'm fully recovered from NYC, I'm very pleased. I also think I could have pushed harder, but maybe only by about 5-10 seconds.

My next race is the St. Jude Memphis marathon on December 4. It's hard to believe I am doing another marathon so soon! My company is a gold sponsor of the race, and we have a booth at the expo. So I go down there and man the expo and organize our employee team of runners. (I work for a software company that has nothing to do with running, but they donate a great deal of money to St. Jude, so I suggested the marathon sponsorship). But I think I am jumping ahead to the next blog post!

Now it's time to celebrate Thanksgiving with my new husband and other family members!
at 12:37 PM