It's 3:39a.m., and I can't sleep. I finally gave up on it and thought perhaps it was because I didn't write my Army 10-miler blog yesterday. Until I write a blog about a race, I don't feel proper closure. So here I am in a hotel room in Washington, D.C., at 3:39a.m. writing a blog on my laptop. I didn't write the blog yesterday because I was so busy with a work event that my company is hosting in D.C. More on that in a bit. . .

Yesterday, I ran my first Army Ten-Miler. This race accepts 30,000 registrants and is the largest 10-mile race in the country. I had never run it before because I had heard it was ridiculously crowded and that the crowds prevented you from running your best. Dealing with the metro system and the crowding didn't sound at all appealing, especially since I had a panic attack after the Marine Corps Marathon in 2006 due to crowding. But my husband really wanted to run this race, so I registered too. I registered part of team Pacers Ambassadors, and it would be my first time racing as part of a team. My husband was on the Lockheed Martin team (they actually had about 20 or so teams).

Before the Race
The day before the race, my husband and I spent several hours moving and unpacking boxes for my work conference. After getting our race packet, we made our way to the conference hotel in Georgetown where we met up with a few other employees to unload a truck full of boxes. I felt guilty that my husband was doing manual labor for my company the day before a race, but he was more than happy to help out.

Given the fact that I had been stressing about the conference all week and not sleeping well, and that the day before was spent on my feet moving and unpacking, I didn't expect a fantastic race. The weather forecast was for partly sunny and 58, which to me is too warm to run at my peak anyway. It's by no means disastrous, but for Oct. 24 in Washington D.C., at 8:00a.m., I expected temperatures in the mid to upper 40's-- that's what we had been having the past two weeks. I decided I would just go out there and try my best, despite the weather being a little warm and despite how tired and stressed I had been all week.

The Start
On Sunday morning, we took the metro from our hotel to the race. There were swarms of people. We knew we needed to be in our corral by 7:50, so we headed over there at 7:30. It wasn't a far walk, but due to the immense amount of people, it took almost the full 20 minutes to get to our spot. My husband and I were both in the Green Corral, which was the first corral behind the elites. We looked behind us and it was amazing to see the sea of people. I was amazing at how they didn't at all enforcing the corral system. Each year they say they are going to be strict about not letting people into corrals if they didn't have the proper wave, but there was absolutely no enforcement. There was also no enforcement of the headphones policy. I saw quite a few people wearing them. I stopped racing in headphones over a year ago, so this didn't affect me, but I know a lot of people really like wearing them in races.

My husband wanted to be toward the front of the corral and I wanted to be closer to the back of it. We ended up a lot closer to the front and I had a feeling I was going to be run over by faster runners. This was not the case, though, because the first half of my first mile was a lot slower than goal pace. Instead of a horn or a gun, they fired a cannon and we were off.

Miles 1-3
As I said earlier, I got a slow start due to crowding. I ran the second half of the first mile a lot faster than goal pace to make up for the first half. As for "goal pace" I was targeting a 7:40. I wanted to run the tangents, but it was impossible to see where they were given all of the people in front of me. The first few miles felt like a tempo run, and so I knew I was pacing myself correctly. The big question was weather or not I'd be able to hang on at at the end, as the sun got higher in the sky and the temperatures rapidly rose into the low 60's.

Miles 4-7
These miles seemed to go quickly. I took a Honey Gel at mile 4.5, which I thought would be good timing. I had been carrying a small bottle of water with me, which I tossed right before taking my honey. Afterwards, I only stopped at one water station at around mile 8. This part of the course is mainly flat, but it did seem like mile 7 was an incline downhill, which we would turn around and run back up during mile 8.

Miles 8-10
I knew I was on track for meeting my goal of 7:40, but I also knew that the hardest part of the course was the rolling hills at the end. Mile 8 was my slowest mile. It was up an incline, and there wasn't much downhill to make up for it. I wanted to keep a solid pace, but I also didn't want to burn myself out before the last two miles. I logged a 7:54 mile, which I knew would put me off target, but I figured I'd try to really stay strong for the last two. It was getting warmer and the course was getting hillier. I tried to maintain my strong effort level, but my pace slowed a little bit.

The Finish
According to my Garmin, I ran 10.11 miles. So even though my average pace was reading 7:42 by the end, I knew that my official pace would be slower. After my Garmin beeped for mile 10, there was still 0.11 to go and I sprinted as fast as I could. I saw that I was at risk for not even being in the 1:17:xx range so I gave it everything I had. The last 0.11 was a pace of 6:18. Wow! Just goes to show what a little adrenaline can do late in the game! I was excited that they called out my name and my city as I crossed the finish line. It was quite the high, considering the thousands of people there cheering.

This is a PR by over 3 minutes, but my last 10-mile race that I ran at full effort was over three years ago. 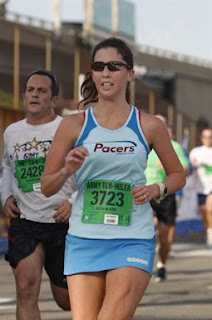 th my race, especially given that I had a hard, stressful week and that the weather wasn't as cool as my recent half marathon. My pace was pretty much what I expected, although I didn't factor in the extra distance you get when you can't run the tangents and you weave a lot, so I thought I'd get around 1:17:00. My husband ran a 1:14:00, which we were both amazed at. That's over 8 minutes faster than his time from last year! He's getting so fast so quickly!

Post-Race
There wasn't any time for relaxing after the race. My husband and I headed straight for the metro and back to the hotel. Our conference attendees were arriving and about 40 of them were taking a bus tour of Washington. I was the only person from my company on this tour, an as one of the conference organizers, I was in charge of making sure it went smoothly. My husband joined me for the tour, which was actually really nice and informative. Thankfully, we spent most of the time on a tour bus and there wasn't much walking involved (until we decided to walk home from the last stop. . . ) It was really interesting to learn about all the places I had just run by, and it gave me a greater appreciation for the race.

After the tour, my husband headed home and I attended a cocktail reception as part of the conference. Because of all of this, I didn't have the opportunity to write my blog yesterday. But now that I have completed this blog, hopefully I can return to sleep for a few hours before the conference begins.