Background
Going into this race, I felt like a PR was pretty much a guarantee, provided that the weather didn't interfere. I set my half marathon PR of 1:50:43 (8:27 pace) back in January in Houston, and I hadn't even been running in the three weeks leading up to it due to an injury.

Part of my success there was due to the fact that I told myself to relax and have fun with it. I learned that the less pressure I put on myself while racing, the better. I expected a half marathon PR back in August when I ran the VA Beach half marathon, but due to the wicked humidity, and the fact that I was coming down with a nasty virus (that the race worsened, like 10 fold), I ended up with a disappointing 2:03, and I felt like death when the race was over.

On Friday night, I arrived at the hotel that I had booked last-minute. They had forecasted major thunderstorms for Saturday morning, so I figured I would rather face rush-hour traffic with no thunderstorms on Friday than have to deal with that on race morning. The hotel was really nice, and it was located about 15 minutes away from the race. I found a small Italian restaurant nearby and I ordered ziti marinara for carry out and ate it in my hotel room. I am not sure how an Italian restaurant can mess up something so simple, but this pasta was awful.

I also realized that this was the first race that I had ever traveled to where I was alone. Usually I go to races where I know someone who lives there, or I travel with somebody. But for the first time, I was carb-loading alone.

Race Morning
I looked out my window and there was no rain. All the weather web sites were still forecasting a 100% chance of rain during the race with 100% humidity. Temps were supposed to be in the lower 60's. I ended up wearing a sports bra (no shirt to cling to me if it got wet) and a hat to keep the water off of my face.

I drove to the site of the race and calmly told myself not to panic as I could not find parking. So many roads were blocked off, that I couldn't get to the lots that the race web site said to use. At one point, I found myself going down a dark alley under the stadium and I was all freaked out. I finally found a lot that was really close to the start line, but that the web site hadn't mentioned.

Miles 1-4
The race started and memories of the marathon from last year came flooding back. The first two miles were on the same streets and I just reminded myself of how it took a while to get into my "groove"
back then, so it was okay to not feel great at the beginning. I really didn't want to go out too fast, or waste energy weaving through people, so I let the crowd set the pace. It felt like a pace of 8:45, and I told myself that any pace was acceptable for mile one, but it ended up being 8:15 and I was pleasantly surprised. All I had to do was to maintain that exact pace for the remainder of the race.

I carried a small water bottle with me for the first few miles. I was mentally prepared for a somewhat steep hill at the end of mile 3, which during the marathon, was the end of mile 19. I was thankful that it was only mile 3 and so glad that I wasn't having to conquer that hill at mile 19 again. After that, we ran on a track through a stadium and then around a large parking lot. This was cool because I could see a very long stream of runners behind me and ahead of me. Everyone was sprawled out around the track and the parking lot. I must have slowed down here, although it didn't feel slower.

Miles 5-10
During this whole time, there was not a single drop of rain. The temperature was in the mid 60's and
very humid. I tried not to get freaked out by the humidity, and just told myself to push through. I had my first pack of sports beans during mile 5 and my second pack (with caffeine) during mile 10. I ate about 3/4 of each pack.

The course wound through some neighborhoods, and this was not part of the full marathon course. There was no mile marker 5, (or at least I didn't see it) and I told myself not to worry about it and just keep going. I crossed the 10K timing mat at 51:03, which was perfect! This was a pace of 8:13, and exactly on target with where I wanted to be. I wondered if my friends were getting the text messages they signed up for. I would later find out that the timing system was completely messed up.

Mile marker 9 was misplaced and this messed me up. According to my watch, I ran a 6:43 mile, which I knew was not correct. However, there was a downhill during that mile, and I did feel fast, so I figured there was a good possibility that I had run a sub-8:00 mile. I told myself to slow down so that I wouldn't hit the wall during the last few miles. This was a mistake. I came to the next mile marker in 10:21. I had no idea what those two miles averaged at the time, but it ended up being the slowest part of my race.

Miles 11-13.1
I was finally in the home stretch. I told myself that nothing could stop me now! Well, the wind did its best to stop me. By this point, the temperature had risen to about 68 degrees, with high humidity, and the winds were really picking up. I couldn't draft off of anyone because there was no one close 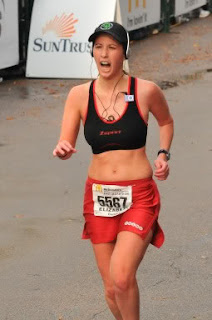 enough to me. I never felt like the wind was at my back-- it seemed like a strong headwind for these last three miles.

I was looking forward to that last mile because I knew that it was mainly downhill. It was mainly downhill, but I was also fighting wind, so it was a really weird sensation. The last quarter of a mile was a steep downhill and I wanted to make the most of it. I lengthened my stride farther than it's ever been and I felt like I was flying. I was afraid of slipping on the wet pavement, but I stayed focus and tried to really hammer it home with the help of that downhill.

I sprinted to the finish line and my legs were moving faster than I have ever felt them go, with the momentum of that hill. I don't know how fast the sprint was because I didn't stop my watch until a few seconds after crossing the finish line, and as of now, my chip time has not been recorded by the race.

After the Race
Because I have far too many race photos of me hitting my watch at the finish line, I waited until I was well beyond it to stop my watch. My watch time ended up being 1:48:45, but I'm going to call it 1:48:42 to account for the fact that I waited a few seconds to stop it. (Yeah, I am OCD that way).

Because of so-called weather issues, my chip time is the same time as my gun time in the official results. About half of the other runners have that as well, so I hope they correct it. I am really not a fan of the D-Tag. I think I have complained about it in every blog of every race I have run with it. My VA Beach half marathon splits were incorrect for about a week, and then they were finally fixed. I hope they are able to fix my official results, because this is a PR for me!

I drove back to my hotel, showered and checked out. I then went back to the race where I met some marathoners from the Runner's World web site for a beer and lunch. The marathoners suffered some major heat/humidity. It was actually sunny with temperatures rising to about 74. This was nowhere in the forecast!

Didn't Push Hard Enough?
When I crossed the finish line, I felt amazingly good. I typically am out of sorts for about 5 minutes after a half marathon. I have never felt so good at the finish line! Nothing hurt, either. I had no
soreness or leg aches during the race. I felt like I could have kept going at that same pace for a few more miles, but it would have been hard to speed up. Once again, this is a testament to my endurance abilities over speed. I didn't feel sore or stiff for the rest of the day, and today, there is just some minor soreness.

The good news is that I won't have to sacrifice this week of training due to recovery. I will hopefully be able to log another 50-mile week instead of having to take extra days off for recovery. This was not my "A" race, so it makes sense that I didn't push it. On the other hand, I am really curious what I could have done if I had pushed harder. Or if there was no wind or humidity. I am planning on the half marathon this spring, so this just sets me up for even more PRs!

Here are my rankings:


I am very pleased with my rankings. Sure, I think I could have run faster, but maybe not because of the wind and the humidity. Next up is my annual Turkey Trot 5K.
at 6:11 AM