The title of this blog pretty much sums up my experience at the VA Beach Rock 'N Roll half marathon yesterday. I've now run this race three times (2005, 2006, 2008) and each time, I have not managed to finish under 2:00. Yet nearly all of my other half marathons have been well under 2:00.

I have a love-hate relationship with this race for sure! I love the hype, the beach, the flatness, the expo, and the relative proximity to my house. I hate the weather!!!

The D-Tag
I am very skeptical about how reliable this Chrono Track system is. At the 20K a few weeks ago, there was a large group of finishers whose results didn't appear until four days after the race. At the expo, they had a test station set up to test the D-Tag, and lo and behold-- it wasn't working! "You'll be fine tomorrow," they assured the runners. "We just can't get the test system working."

I also don't like how this tag doesn't really work with elastic YANKZ laces. The way the laces are shaped, you can't really put the tag underneath them without the laces falling incorrectly. So, I used the cable tie that was meant for the gear check bag to affix my tag to my laces. I later learned that my splits were recorded incorrectly (I certainly did not run the first 5K at a 7:50 pace), and that my finish time is also off (I was actually 8 seconds faster, according to my watch). I don't care enough to have them correct it, though. 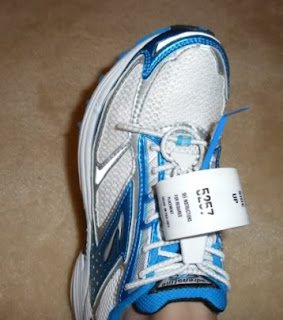 Before the Race
In 2006, the pre-race drama of getting to the satellite parking lot was really what killed my spirit and motivation. But this year, I was able to park just a few blocks from the start line at my friend's beach condo. I got there nice and early and walked to the start line. I was hoping to meet up with a few Big Cats and other friends. Luckily, Dave (ADRNLEN) found me.

I've only raced without a tank top once before, but I frequently train in just the sports bra. I figured I needed all the help I could get with the heat/humidity combo. I said goodbye to Dave and then made my way to the corral. I definitely liked the "wave" system. In past races, there have been corrals, but it seemed like everyone started at the same time. This year, there was a minute and a half between when the corrals were released. As a result, I felt like there was no crowding on the course.

Miles 1-4
I started off at what felt like an appropriate, sustainable pace. There was a slight downhill here, so that contributed to me going out a little faster than planned. I was hoping to go out at an 8:15, but logged the first mile in 8:04. It felt good, though, and I figured I should try and maintain it before it became too hot and humid. I carried my own water bottle with me (a small one) so that I could skip the first three water stations.

Miles 5-9
During mile 3, I had poured water all over myself and some of it got into my shoe. In past marathons, I've had this same water-in-the shoe feeling, but it always dried out after awhile. This time, it wasn't. My left foot started to feel really wierd and numb-like, and I came to a point where I felt like I had to stop and take the shoe off. I did, and I shook the water out of the shoe and shook my sock as well.

Afterwards, that same sensation came back and about half a mile later, I was forced to stop again. When I stopped for the second time, I realized how completely tired and winded I was. And I couldn't get going at the same pace again. My upper back was hurting, I felt a bit crampy in my stomach and I was extremely fatigued. I walked a little bit, and then started running, but I felt horrible.

Starting at mile 7 I was thinking that I wouldn't be able to finish the race. I wanted to get off the course and sit down. I was wondering if it was the 55-mile week I had just come off of, or perhaps running 11 miles the Tuesday before the race. But really, it was just the humidity zapping me. I was drinking plenty of water, and I had pre-hydrated for two days with Electrolyte-enhanced Smart water. I also ate two packs of sports beans during the race, which contain electrolytes. And yet, something still felt wrong. 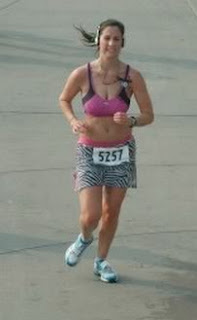 I kept looking around me to see if the people running near me were in my same corral. There was a huge mix. I saw some people from corral 2. Some from corral 10. I saw the 1:52 pacers (I know-- an
odd finish time to have a pace group) and I knew there was no way they were going to finish in 1:52. All I wanted to do was get to the finish line.

I was incredibly thirsty, too, and was drinking multiple cups of water at each station. I felt sooo sluggish and awful. I was soaked in sweat and the water I kept pouring on myself. I was seriously predicting a finish time of 2:15, but luckily I was able to hold it together somewhat.

The Finish
It was kind of pathetic that the last 0.1 was a 9:58 pace and it felt like a sprint. But that's what it was! I was so happy to be done with the race. I felt awful afterwards, and it took me about 15 minutes to feel "right" again. I got to a point where I had to sit down and was seeing black spots. But that didn't last for long. I kept hearing runners say that they had never felt so awful after a race before. At least this validated that it wasn't just me who was having problems. 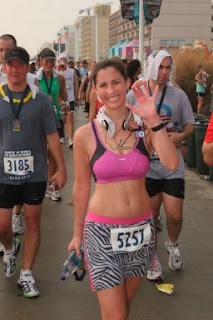 I made my way back to my friend's condo where I took an ice bath. I didn't understand how my legs could be so achy with that pace. I do training runs faster than that and my legs feel 100% afterwards, and the next day.

I'm pretty satisfied with how I placed. And I know I put out all the effort I could muster. Whereas in 2006, I just gave up mentally. I'm still going for a BQ in October.
at 11:25 AM