This morning I ran the Leesburg 20K. My first 20K ever! The weather was abnormally nice for this time of year with very low humidity and temperatures in the lower 70's. The majority of the course was shaded, which also helped.

Before the Race
The race was located about 30 miles west of me. I picked up my friend Lauren on the way (she's run this race every year for the past few years) and she briefed me on the course. I did NOT use my iPod for this race. I knew that it would be a crowded course, run on a narrow trail, and I wanted to be sure I could hear people around me. I can hear even with my iPod, but for some reason, I just thought it would be better to leave it at home.

We arrived at the race, picked up our bib numbers and "ChronoTrack" RFID tags.

New Timing System
This new RFID system was being debuted at this race. I wasn't particularly pleased about this. I have my own personal timing chip, which saves me a dollar off of my entry fee. But now with the RFID, I don't get that discount. But what bothers me more is that this technology has not been tested and used as much as the ChampionChip system. In fact, when the Houston Marathon announced that they would be using the RFID tags instead of chips, so many people complained, that they decided to use the chip after all.

The RFID tag is called the "D Tag" and it's a piece of paper that comes attached ot your bib. You make a "D" shape with it and attach it to your shoe. It's much bigger and bulkier than the timing chip, and with my YANKZ laces, it took me awhile to figure out how to affix it. Luckily, Lauren did it for me and she made it secure.

Currently, the online results show that anyone who finished between 1:58 and 2:23 was not timed. There is a huge gap in the results, and I am suspecting it's because of this new timing system. I hope they get it figured out and that all those runners don't go un-scored.

Anyway, after putting the tag on my shoe, I ran a warmup mile on the course. I then met back up with Lauren and we headed to the start.

The Course
This course is an out-and-back. When you go out, it's a gradual incline the entire way. I don't recall any part of the course that was flat. And of course, on the way back, there is a gradual downhill the entire way.

Miles 1-4
I knew that the first half of the course would be much more challenging than coming back. One of my friends said to me "If you can't negative split on this course, then you'll never be able to." I almost always try and negative split, so with these conditions, I expected a very heavy negative split.

My strategy was to run the race based on effort. I had my watch and I was recording my mile splits, but I didn't let that dictate my pace. I wanted to practice putting out an effort that "felt" like marathon pace. So I pretty much ignored what my watch was saying and I ran based on effort. I was going for an effort level that was just slightly slower than my tempo pace.

Miles 5-8
After four miles, I was really wanting the turnaround to come. I was really getting tired of this uphill battle. There was just no relief. Not a single area that was flat! At mile 6, there was a steep downhill, which was a nice change, but I knew that it would become a steep uphill on the way back. Meaning, I wouldn't be quite "out of the woods" after the turnaround.

I ate my sports beans at mile 5. After eating those, I finally felt "good". I don't necessarily think it was the extra energy that helped. I think it was that I finally got into the "groove" of running this race. Speed is not my thing-- endurance is. I typically feel more comfortable during a run once I am 4-5 miles into it.

Finally, I reached the turnaround and breathed a sigh of relief. I figured that my shot at averaging goal pace was lost. Most all of my miles had been slower than my target and I figured there would be no way I could make that up on the way back. But I told myself I still needed to run based on effort level.

Miles 9-12
This was the best part of the race. I literally felt like I was flying through the miles. It felt so easy. I think I could have even pushed harder, but once again-- I wanted to base my effort on perceived "marathon pace". It was such a nice reward to finally be running fast and feeling strong. I started to get a bit of my ache on the side of my knee near the IT Band insertion point. But it held out pretty well until the end. 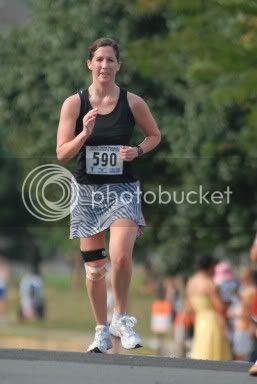 You can see the huge RFID tag on my shoe!

The Finish
I knew that to be at Marathon pace, I had to finish in about 1:43. I looked at my watch and I figured I could finish in 1:44, and still average my BQ pace. The last 0.4 was actually uphill, so I slowed down a tiny bit, and finished in 1:44:26. I don't know how I placed because there are probably 100+ runners who did not get scored. (At least for now, there is a huge gap in the results).

As soon as I realized that I did hit my marathon goal pace average, I was very pleased. I also had "gas in the tank" to go run another 2.5 miles after I dropped Lauren off at her home. Totalling 16 for the day, 47 for the week. At this point in my training, marathon pace should feel challenging, but not like a full-effort. That's how I paced myself, and I ended up meeting my target. Of course, this would yield a 3:40:40 marathon, but hey. . . if I do BQ, I am expecting it will be by the skin of my teeth!

If this race had continued for another 0.7 miles and I had maintained my pace, I would have set a half marathon PR. 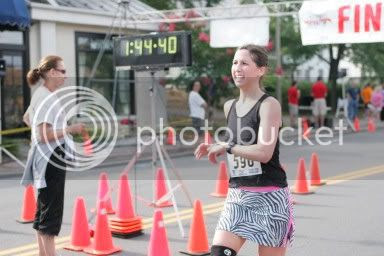 In terms of injuries, the run was pain free for the most part. At one point, I felt a slight ache on the outside of my knee, so I stopped to tighen my PAT strap and that took care of it. The knee issue that I was dealing with at the beginning of this program seems to have disappeared 100%.

Congratulations to Lauren, and it was great seeing you today!!!!!