On Saturday morning, I ran the Suntrust Richmond Marathon. The race was celebrating its 30th anniversary, having started in 1978-- the year I was born. It would have been cool if the first marathon was on my birthday, but they actually used to have it in October.


Before the Race
I had a major snafu happen at work that I was trying to control regarding the web site. It's still not fixed. This left me stressed for the entire day, and I tried not to stress over it. I was still trying to resolve the issue in my 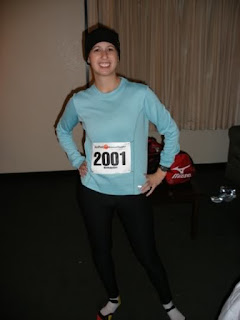 hotel that evening, calling my Web team, my boss, and our IT person. I'm still stressed about this, but there is nothing I can do other than to urge my IT person to work with my Web team to fix it.

I slept surprisingly well that night, woke up early the next morning (as usual) and prepared for the race. I was so gidddy! I excitedly ate a pumpkin-flavored stalker bagel. I had a close eye on the local weather station, praying for no rain.

I knew it was going to be cold, so I bundled up well. On top of this outfit, I had a hoodie, and then a heavy ski vest. I wore two pairs of gloves. I also used hand warmers in between the gloves.

These worked really well. In fact, they were still warm at the end of the race. You simply open the packet, shake them a little, and they provide constant heat. If it weren't for those hand warmers, I know I would have had numb hands the entire time. Additionally, I put heat warming insoles inside my shoes. I knew I couldn't run in them, so I wore them to the start line, and removed them about 5 minutes prior to race start. They were amazing! When I took them out, my feet immediately started to go numb, but I bounced around as much as possible to prevent that. Both the hand warmers and the foot warmers were a lifesaver, so I recommend them to anyone who runs or races in very cold weather.

The Start Line
Brent and I made our way over to the start line. I didn't want to start with him, because he goes out much faster than I do. We were anticipating finishing around the same time, but his strategy was to go out at an 8:00-8:30 pace and then do some walking in the last 6 miles. Whereas I wanted to keep a steady 9:00 pace the entire time. So Brent walked up closer to the start and I stayed behind. I was praying that the race would start on time, because I had already gotten rid of my foot warmers, and every minute without them, just standing there was torture. It was in the upper 30's and cloudy.

Miles 1-5
After only half a mile, I threw off my hoodie. I didn't think I would warm up so quickly! I didn't see a mile marker at mile 1. But, having learned from the MCM 10K, I could not let a missing mile marker phase me. I just kept on going, hoping to see a mile marker 2. Brent and Carlton later said that they saw this mile marker, so I don't know how I missed it. It was unfortunate because I never know quite how fast I am going when I first start. I need to know my starting pace and then speed up or slow down from there to hit my target. I hit the Mile 2 marker at 18:11, so I knew I was good. I figured I should speed it up a little, because I wanted to bank some time in the beginning- before the hills started. Fortunately, I saw every other mile marker on the course. I decided that I would eat 4 packs of sports beans in this race instead of my usual 3. So, I ate my first pack at mile 4.

Miles 6-10
This was the best part of the course by far. When I reached mile 7, I knew that the entire thing would be 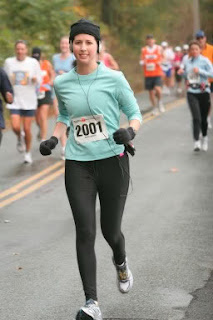 downhill. It was fantastic! I held myself back a little bit so as not to tear up my quads too much. When I got to the bottom of the hill, I was so pumped! There was a "party zone" there with tons of people, music, and I felt like such a rock star. After the party zone, the course went by the James river. It was extremely scenic here. It was woodsy and peaceful. I love looking at water when I run. I ate another pack of sports beans at Mile 10. My hands were still holding up pretty well with the two pairs of gloves and the hand warmers.

Miles 11-15
I knew I had banked so major time, so I was prepared to get some slower mileage here. One of the course's nastiest hills is Mile 11. I decided that I wouldn't exert any extra effort to get up the hill. I would keep my effort level constant, and just go a little slower. I knew I could afford it. I was really happy that I finished the mile in 9:15. It was slower than my target pace, but not that much slower, considering how big of a hill it was. I took my hat off at the halfway point because I was actually getting a little warm. I tucked it into my pants because I like that hat and didn't want to throw it away.

My halfway goal was 1:57, and I was so excited to cross the halfway mat at 1:56:55. I was excited that I could be so exact about meeting there- only 5 seconds faster than expected! This was extremely motivating for me. I told myself that all I needed to do was to run a 2:00 half marathon and I would be golden! During marathons, I tend to get really pumped right before and after the halfway mark. I'm far enough into the race to be comfortable with pushing the pace, but not so far into it that I am hurting and exhausted.

Miles 16-20
I had my third pack of beans at mile 16. This was the hardest part of the course. Miles 16 and 17 were mainly uphill. It wasn't very steep, but it was long. We crossed a bridge where the winds were strong. There was no crowd support. To get through this part of the race, I just looked at the river on my left and the Richmond skyline on my right. Tori Amos' "Bouncing Off Clouds" was playing, so I looked up at the sky to distract myself from the uphill. 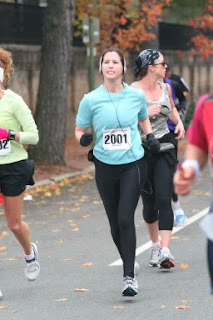 4:00. Easy, right? I had plenty of energy and I wasn't tired. However, my legs really started to hurt me at mile 21, after all those hills. I just kept telling myself that my legs were going to hurt if I ran or walked, so I might as well run. These miles were hard. The hills were gently rolling, but my legs hurt so much. I just thought back to the Miami marathon where these miles were such a breeze. I also thought about New Jersey and what I did to get through those. They say a marathon really begins at mile 20! I told myself that it was okay to slow down a little bit (I had so much time in the bank), but not okay to stop or walk. I was still strong!


Mile 26 and 0.2
It wasn't one big downhill, as I expectd. Rather, it was a downhill followed by flatness, then another downhill, followed by flatness, etc. I was so excited by this point, but my legs were killing me. There was no crowd support until about mile 25.5, which surprised me. The last time I looked at my watch was at mile 25.5, and then I decided to just really focus on moving forward and stop looking at my watch. I knew I was on target for a 3:57. When the finish line was in sight, I was so happy! I gunned it across the finish line, and stopped my watch shortly after to discover that I actually got a 3:56!
Mile 26: 9:27
Mile 0.2: 1:47 (8:20 pace)

After the Race
Brent greeted me at the finish line. He had finished in 3:53-- a PR for him by 6 minutes! I had this inner chill and my teeth were chattering like crazy. We finally found Michael Hayden (3:01) and Carlton (3:10) and walked back to the car. I was soooooo cold! On the way, we passed a Funnel cake stand. I was ecstatic. I told the funnel cake vendor that he was an angel sent from God above. OMG- this funnel cake was amazing. So warm, so fresh, so tasty. I warmed up almost instantly. We all went back to Carlton's place where we showered and hung out. 4 great races!

Thank you very much to all of you who supported me throughout training and during my race. It means so much to me, and it really motivated me yesterday. Next up: Houston!
at 2:38 PM