Coronavirus and the Boston Marathon

Today, the New York Road Runners (NYRR) announced that its half marathon, which was scheduled to be held on Sunday, March 15, is now canceled. The New Bedford Half Marathon in Massachusetts was also canceled due to fears of spreading the novel coronavirus. Meanwhile, the Los Angeles marathon was held as planned last weekend.

Nearly all large races occurring in March and April have announced that they are closely monitoring the coronavirus situation and are working with health officials on the appropriate course of action. The Road Runners Club of America (RRCA) has provided guidelines for communications regarding race cancelations due to the fear of spreading the virus. New developments and cancelations are occurring daily as the fear of COVID-19 rises.

I've ready plenty of articles and seen loads of data regarding the coronavirus. To me, it seems like we should be concerned, but we shouldn't be taking such drastic measures to contain the virus and it shouldn't be causing the state of panic that we are now in. Just look at what's happening:


To me, the virus doesn't seem so deadly that its worth sacrificing our economy, our freedom, and the things that bring us joy. We have 709 known cases of the virus so far in the U.S. and 25 deaths. The flu kills way more people. Yes, I know the percentage of people who die from coronavirus is much higher than that of the flu, and there are likely many more infections that we do not yet know about. However, there is no (published) evidence that COVID-19 will kill more people than the flu, and there is no evidence that it can be contained. And at what point will enough be enough? When will it be okay to start living our normal lives again?

If you've been following my blog for awhile, you know that I have immune system issues. I have gotten mono three times in the past 8 years, and I have been sick for months at a time. Greg is worried that if I catch the coronavirus I could die, given my immune system. That's possible, but I could also die in a car accident. Because of my immune system issues, I wash my hands about 5-10 times per day. I don't touch anything in a public place-- I use my sleeve or my knuckles instead of my fingertips. If I have to shake someone's hand, I immediately go to the bathroom and wash my hands. I don't use hand sanitizer; I use soap and water because you don't necessarily want to kill the germs; you want them off your hands. I sometimes hold my breath in elevators. I do not like people breathing near me. When the barista hands me my coffee, I make sure she's not touching near the part where my mouth would go.

I like that the general public is now taking these same precautions and that I won't be forced to shake hands, or looked at oddly for not touching door handles. And yet I still think this virus is over hyped. I have not done anything differently and I don't intend to.

I'm registered for the Cherry Blossom 10-miler and the Boston Marathon, both of which are now at risk for cancelation. I had hoped that the LA marathon set a precedent for NOT canceling races, but now that NYRR has canceled its half marathon, that could be the new precedent. I strongly disagree with the decision to cancel races because:
If I were advising the Boston Marathon officials on whether or not to cancel their race, I would not use any of the above arguments because they are mostly my opinion and there's room for disagreement. I would tell them to analyze the population of runners and spectators of the Los Angeles marathon. 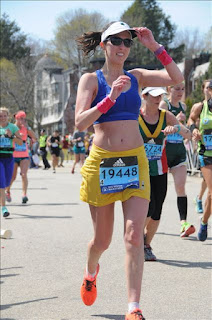 The virus has an incubation period of up to 2 weeks. So, wait two weeks (until March 22) and then determine how many of the LA marathon participants and spectators contracted the virus. If the percentage of that population has a higher than normal rate of infection, then it would make sense to correlate it to the marathon. If not, then there is no evidence that large marathons perpetuate the spread of the illness any more than living one's daily life.

Since the spread of this virus is being extremely closely monitored, it should be apparent in two weeks if LA marathon participants represent a larger-than-normal contingent of infected people. I'm not a medical professional or a public health professional but to me, it seems like this would be the only data-driven way to determine if a cancelation would help prevent the spread of the virus.

Let's take it a step further and say that yes, LA marathon participants and spectators contracted the virus at a higher rate than the rest of the US population. Should Boston be canceled? They would have a data-driven case for doing so, but I still think that it should be left up to individual choice. Cars are dangerous but they aren't banned. Jumping off a bridge is dangerous but bridges exist. Furthermore, Boston Marathon runners are fanatics. They will still run the course on April 20, with or without the support of volunteers and medical professionals. That could pose a far more dangerous situation.

It will be interesting to see what happens in the coming weeks. The number of daily reported infections in the US has declined over the past few days according to several sources, and if that trend continues, maybe we can all stop panicking and get back to living. . . but still not shaking hands.

Edited to add:
I am not a medical professional and this post is not meant to be a medical one. It's about how our society is collapsing under the fear. Let's all take precautions but not create one disaster after another, after another.
at 7:39 PM